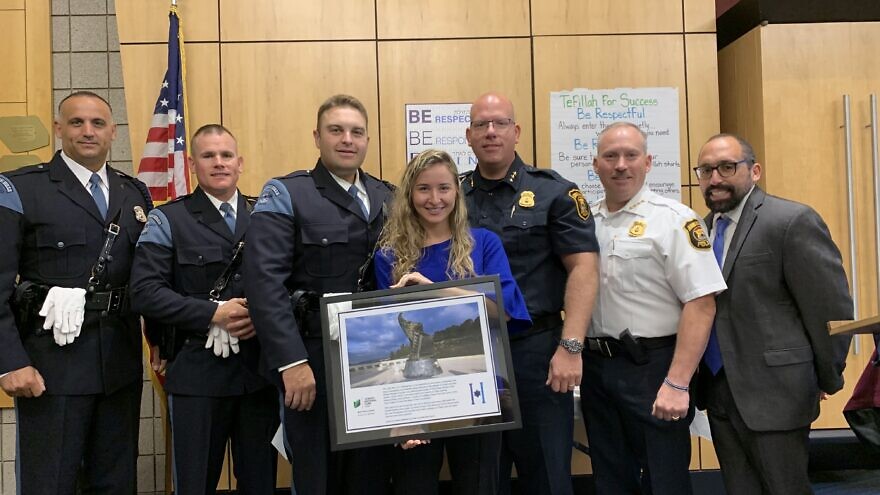 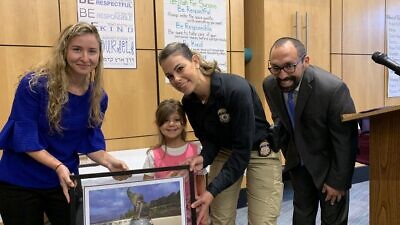 The middle school students were addressed by Farmington Hills Police Chief Jeff King, who highlighted the immense sacrifices made by emergency services professionals and the ongoing need to recognize their contributions while also noting the ultimate sacrifice made by hundreds of first responders 21 years ago on 9/11.

“My colleagues and I are blessed with the ability to protect [our community] on a daily basis,” remarked Chief King. “It is our calling, and we feel honored to serve, whether we are police, fire, or EMS responders. One of our first responder community’s biggest responsibilities is to remember those who have fallen in the past, including on 9/11. Every year, we do that, and as the events of that day worsened, it was the first responders who never flinched, never rested, and showed up for work every day, even with the fears they had for their families and communities.” 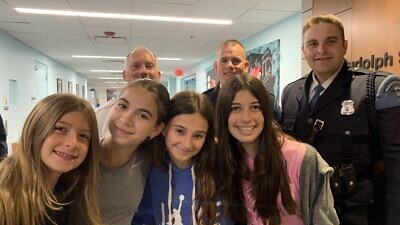 Jewish National Fund-USA Professional Sunny Cohen joined with students to present a plaque to the first responders in attendance. The plaque acknowledged the immense impact made by first responders while highlighting the organization’s unique 9/11 memorial in Jerusalem, Israel.

Eighth-grader Daniel Shapiro, who attended the ceremony, shared how the gathering provided an important forum for remembering the tragic events of 9/11. “For me, today felt like a time to be serious,” said Shapiro. “We are showing that we are not going to forget the lives lost, nor will we forget the contribution that first responders have made, and continue to make, to keep our families and us safe.”

Jewish National Fund-USA’s 9/11 Memorial is the only commemorative site of its type outside of the U.S. that lists all the names of those who perished on 9/11. The organization hosted a national 9/11 memorial ceremony at the site, attended by U.S Marines, the U.S. Ambassador to Israel, Israeli firefighters, police officers, and diplomats from around the world, and was broadcast via JNF-USA’s Facebook page. 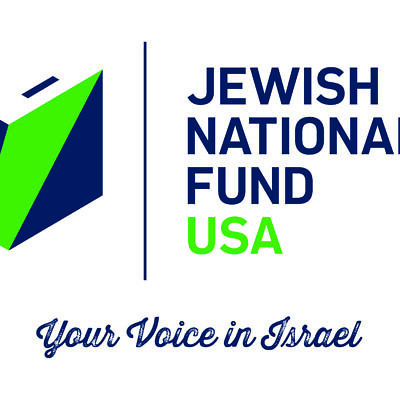 Jewish National Fund-USA
JNF-USA is the leading philanthropic organization for Israel that supports critical environmental and nation-building activities in Israel’s north and south. Through its One Billion Dollar Roadmap for the Next Decade, JNF-USA is developing new communities in the Galilee and Negev, connecting the next generation to Israel, and creating infrastructure and programs that support ecology, individuals with special needs, and heritage site preservation. Learn more at jnf.org.
Publish your organization's press release on JNS Wire
Releases published on the JNS Wire are communicated and paid for by third parties. Jewish News Syndicate, and any of its distribution partners, take zero responsibility for the accuracy of any content published in any press release. All the statements, opinions, figures in text or multimedia including photos or videos included in each release are presented solely by the sponsoring organization, and in no way reflect the views or recommendation of Jewish News Syndicate or any of its partners. If you believe any of the content in a release published on JNS Wire is offensive or abusive, please report a release.
Never miss a thing
Get the best stories faster with JNS breaking news updates