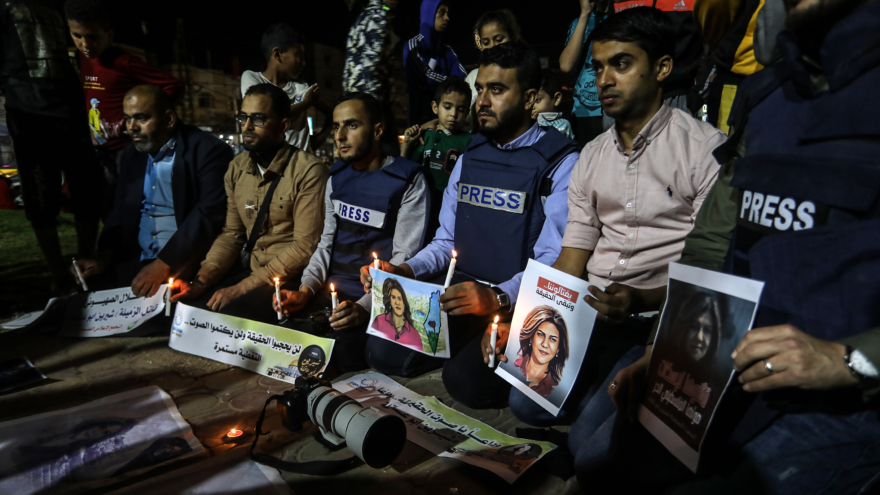 Palestinian journalists take part in a candlelight vigil in the Gaza Strip in memory of Al-Jazeera journalist Shireen Abu Akleh, who was killed in Jenin during a firefight between Israeli forces and Palestinian terrorists on May 11, 2022. Photo by Abed Rahim Khatib/Flash90.
Spread the word.
Help JNS grow!
Share now:

(July 4, 2022 / JNS) Forensic analysis of the bullet the Palestinian Authority claims killed an Al Jazeera reporter in Jenin in May has yielded inconclusive results, the Israel Defense Forces said in a statement on Monday.

“The physical condition of the bullet does not allow for a conclusive determination regarding the source of fire that led to the death of the journalist,” the statement said.

Palestinian authorities had handed over the bullet to the U.S. Security Coordinator for Israel and the Palestinian Authority (USSC) Lt. Gen. Michael Fenzel on Saturday for analysis, and remained under his custodianship until being returned to the Palestinians on Sunday, said the IDF.

The testing was conducted in a forensic laboratory in Israel; USSC representatives were present throughout, according to the statement.

The U.S. State Department in its own statement concurred that the bullet was too badly damaged to yield conclusive results.

“After an extremely detailed forensic analysis, independent, third-party examiners, as part of a process overseen by the U.S. Security Coordinator, could not reach a definitive conclusion regarding the origin of the bullet that killed Palestinian-American journalist Shireen Abu Akleh,” said the statement.

However, while the IDF noted that its own internal investigation had found that there was insufficient information to determine the source of the fire that killed Shireen Abu Akleh, the USSC had concluded that “gunfire from IDF positions was likely responsible” for her death.

“The USSC found no reason to believe that this was intentional,” the statement continued, “but rather [that it was] the result of tragic circumstances during an IDF-led military operation against factions of Palestinian Islamic Jihad on May 11, 2022, in Jenin, which followed a series of terrorist attacks in Israel.”

The IDF emphasized in its statement that Israel does not deliberately target journalists.

Responding to the U.S. statement, Israeli Prime Minister Yair Lapid said, “Tragically, hundreds of journalists have been killed in recent years in combat zones around the world. The State of Israel recognizes the importance of freedom of the press and safeguarding journalists as they carry out their duties.”

At the same time, he continued, “The IDF will continue fighting terror whenever and wherever necessary.” As prime minister of Israel, he said, “I give full and unequivocal backing to the IDF soldiers who risk their lives to defend the citizens of Israel from terrorism and who work around the clock for the security of Israel.”

“It is important to emphasize that during this operational event, as in many others, hundreds of bullets were fired at IDF troops, who responded with fire of their own—only in the direction of the sources of fire,” he said in a statement.

“Our troops and their commanders have the duty to defend the citizens of the State of Israel, and they have my full support to operate accordingly. At the same time, we … take all the possible measures to prevent harm to uninvolved civilians, while enabling freedom of the press,” in line with the IDF’s values, he said.

“This includes decisions regarding force build-up, operations, investigations and cooperation with partners, such as this cooperation with our U.S. partners, in order to uncover the truth. The professional and moral truth are inseparable from our national resilience and it will always be this way,” he concluded.