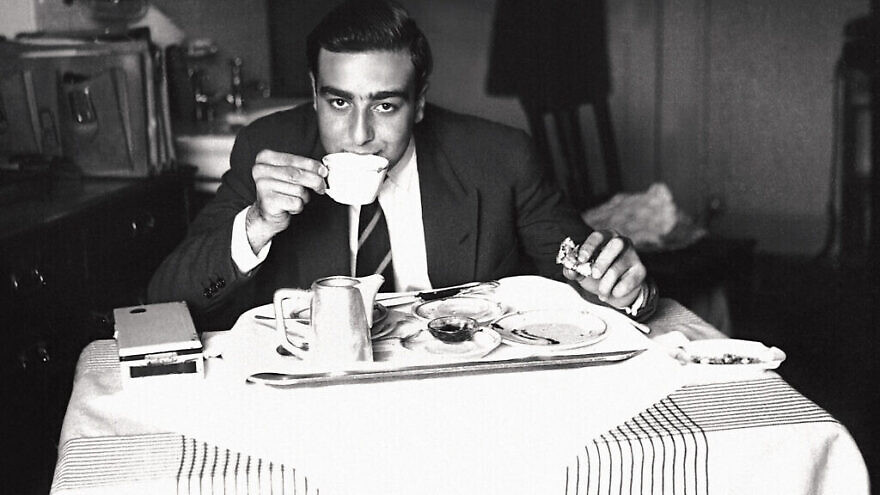 (December 15, 2022 / JNS) It seemed fitting that Sunday’s inaugural New York Jewish Book Fair at the Museum of Jewish Heritage in Manhattan would have its first keynote event about the Jewish banker Edmond J. Safra, held as it was in the museum’s Edmond J. Safra Hall.

At 15, the Brazilian-Lebanese Safra looked 40, and at 16, after being sent to Milan, he’d make $40 million for his father Jacob, who had a bank in Beirut. He’d trade gold and start four banks on three continents. And on the screen Sunday, Gross showed a letter from Rabbi Menachem Mendel Schneerson, the Lubavitcher rebbe, explaining what a mitzvah it was to donate two Torah scrolls to a Brooklyn synagogue.

He could not openly do business with Israel.

“There were blacklists,” Gross said of the 1950os and 1960s. “If you were a company that did business with Israel, you would be put on a blacklist by Syria, by Saudi Arabia, by Kuwait…”

In the summer of 1988, there were articles in the European press saying Safra was a drug dealer with the Medellin cartel or even involved in the Iran-contra arms shipments affair, none of which was true according to Gross, who added that American Express was behind the negative media coverage.

“Had I found evidence that he was involved in money laundering or drug dealing, I would have put it in there [in the book],” Gross said.

Safra and nurse Vivian Torrente died in Monaco in 1999, suffocated by fumes in a fire deliberately lit at his home. The court found that a nurse named Ted Maher started the flames in the hopes of saving Safra and looking like a hero. Maher stabbed himself, set off the fire and left the building, and Safra died, Gross said.

The book festival saw more than 70 authors signing books as well as more than 30 events and seven keynote talks.

Award-winning author Gary Shteyngart, who teaches writing at Columbia University, is recognized as one of the funniest Jewish authors and is known for “Absurdistan” and his most recent novel, “Our Country Friends.”

He immigrated to the U.S. from the USSR with his family in 1979, at the age of seven. At the Solomon Schechter of Queens school, there were three Soviet students who were all teased, he said. The other children called him a communist.

In fourth grade, Shteyngart wrote a parody of parts of the Torah actually written on a scroll. He called “Exodus” “Sexodus.’

“That made me my first American friends,” he said. “It kind of stopped the teasing and the beatings. It was like, ‘He’s not a communist, he’s just a weird kid…’”

“Chekhov wasn’t Jewish but he understood the power of the kvetch,” Shteyngart said, adding that he has a failed novel about New York University trying to take over New York City. But he dumped 240 pages of a book to focus on his other story, realizing the pandemic was a far greater tragedy than an academic takeover.

Shteyngart said his mother still mumbles at night due to someone she knew being buried alive by the Nazis and fears she is in a coffin. Mocked for being “a stinky Russian” as a child, he would make up a story, saying he was not from Leningrad but from East Berlin.

When you’re trying to convince Jewish kids that you’re actually a German, things are not going well,” he said, adding that he would often get beat up.

Circumcised shortly after he came from the Soviet Union to America at the age of seven, he said it was one of the “worst circumcisions ever performed” and that in 2020 he was in so much pain he could barely walk and saw about 20 doctors. He said pills he took for pain made him hallucinate and that this likely had an impact on the latter portions of “Our Country Friends.”  He wrote a piece about his pain in  The New Yorker about it.

“Some mohels want to kill me,” said the author, who is married with a child and said he will be doing a one-man play about the botched circumcision.

“Russians were always into assassination, murders,” he said. “Literature and poisoning people….My mother wouldn’t let me go back to Russia for college. I was supposed to go to Moscow State University as an exchange student…she said ‘the other students will throw you out of the window.’”

Harris said his father was Jewish and his mother was Catholic, and they celebrated holidays of both religions.

“My first understanding of Jewishness was that it was bad news,” he said.

He said Jewishness was great training for writing.

Scott said his mother was Jewish and his father was not.

Scott said Judaism came to him in the form of Mel Brooks, Phillip Roth, Woody Allen and Mad magazine.

He said he had thoughts about  the “ethical obligation to be engaged with the world” and the idea of justice.

Living in North Carolina, Scott said he saw “Young Frankenstein” and ‘High Anxiety” and there was something that called out but he isn’t sure if he was aware that it was just funny or that it was Jewish.

Insdorf, born in Paris to Holocaust survivors, moved to the Bronx at the age of three. She said when she came to America, she realized early on her parents were different because they had accents. She said all three of them have become “a translator of sorts.’

She praised Scott’s review of “An American Pickle” starring Seth Rogen, as Scott asks why his father would answer a question with a question. Their shared obligation, Scott write of the Orthodox and secular character, was to mourn the dead.

In one discussion with photographers who have taken shots of survivors, Martin Schiller, a photographer for the museum’s current exhibit who has a book called “Bread, Butter, and Sugar: A Boy’s Journey Through the Holocaust and PostWar Europe,” said he used a technique of shooting subjects up close, from actor George Clooney to survivors.

Born in Germany, Schiller would become an assistant to Annie Leibovitz.

“Growing up in the shadows of the Second World War, we talked about it in high school pretty much in every class,” Schiller said, adding that his parents’ generation was too close to it.

“To this day, I have a hard time understanding how this was possible,” he said.

A friend of his worked for Friends of Yad Vashem in Germany, and at 2 a.m. at a bar asked Schiller if he’d be interested in helping out. Schiller said he traveled all over and even to Israel and did the project for free. “The work is just as important now as it was 50 years ago, Schiller said, due to the current antisemitism.

Author Stephanie Butnick, host of the Tablet podcast “Unorthodox,” was joined in a “Happy Hour” discussion by Isabel Kaplan, a Harvard graduate who wrote the novel “NSFW: A Novel” about a young woman trying to succeed in Hollywood without losing her soul, and Ariella Elovic, who wrote ‘Cheeky: A Head-to-Toe Memoir,” about the need to embrace one’s body, such as toe hair.

Kaplan said she can chant a great haftarah but can’t tell you what it means. She recently wrote an article that went viral in the Guardian about her boyfriend dumping her for being a writer. Her novel turns on a mistranslation of a Yiddish phrase.

Butnick said she got coffee with Kaplan before ahead of her appearance on “The Unorthodox Podcast” and ordered lunch, and an hour later, the lunch never came, and they realized they hadn’t complained or inquired with the wait staff for fear of being rude.

Elovic, from Sharon, Massachusetts, said were she at the lunch, she likely would not have complained either, despite her father being Israeli. She said she would have liked to think she’d be “the hero,” she said. She has a group of friends called “the yentas” whom she met at camp Yavneh in New Hampshire. She said matzah could be made into a cool clutch, (small purse)  when speaking comically about how foods for the Seder plate could have other uses.

Speaking of matzah, chef Michael W. Twitty, at an event titled “Koshersoul: Cooking and Storytelling,” explained he has a special matzah-meal fried chicken that he makes on Hanukkah and Passover. Twitty, who is Black and converted to Judaism when he was 25, said he doesn’t like the sufganiyot (jelly doughnuts) in America but likes the ones he had at the Machane Yehuda market in Jerusalem. He is a two-time James Beard award-winner and his new book is “KosherSoul: The Faith and Food Journey of an African American Jew.” He makes beignets or puff-puffs, an African doughnut.

“…Only Blacks and Jews create foods that they can use to eat other things with that are more important than the food,” Twitty said. “Gefilte fish is a vehicle for horseradish. Chitlins are a vehicle for hot sauce. There’s no reason to eat a single chitlin or gefilte fish—except to indulge in the painful consumption…sardonic humor that nobody else has…”

He said his late mother would tell him he had to eat something that was nasty, and he’d ask her why they had to “eat their oppression.”

“…You take great joy in understanding what joy is, knowing the negative from the good,” he said. “In lives with some much negativity, prejudice pain, bigotry, knowing what is good and what is bad is an important skill.”

Twitty, who said he doesn’t like cholent, said Ashkenazi food is often described as gray, brown or white and coming out of a jar. He loves kasha varnishkes (buckwheat groats with noodles).

He said many kosher restaurants serve sushi “in case” moshiach (the messiah) is coming.

In his book, Twitty notes that people judge others the minute they set eyes on them, writing: “That stark reality does not stop at the kitchen or restaurant door or at the table. Uninformed people really do struggle with the terms ‘African American foodways’ or ‘Black food’ or ‘soul food’ or ‘Jewish food’ and of particular note in geopolitics, the notion of Israeli food.”

He has been to Israel twice and was excited to visit Africa.

He said the tradition of putting notes containing prayers into the Western Wall has spread to churches and mosques.

“He asked what they were listening to, and they said the music group called B2K (Boys of the New Millennium, an American boy band). When he said he was from America, they touched him.

“They all gave me the hug and pat on the back,” Twitty said, adding that they said shalom and raised their left fists for a salute signifying Black Power.

He said he adopted the notion of Hineni (“Here I am” in Hebrew) to show that he is present, and he noted it was also the name of Rebbetzin Esther Jungreis’s Orthodox outreach program. He said he wants to see more Jews of color represented in the media.