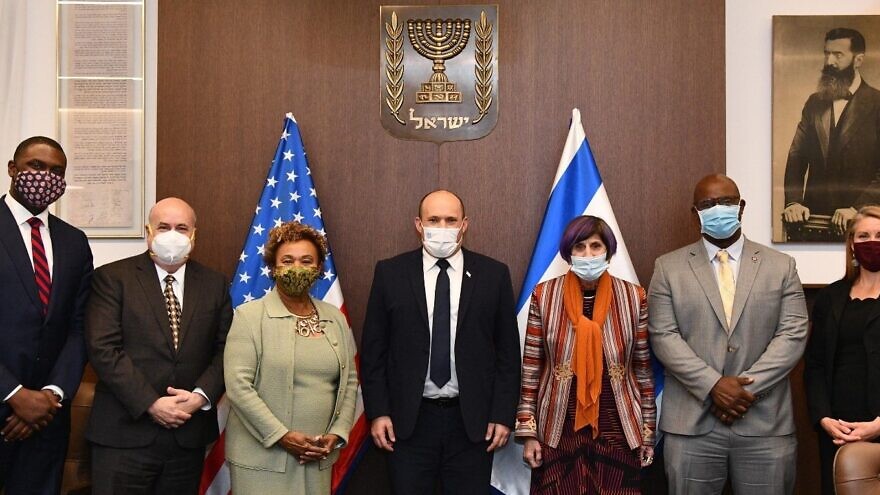 (November 10, 2021 / JNS) Two delegations from Congress met with Israeli Prime Minister Naftali Bennett at his office in Jerusalem on Wednesday, including one which is raising eyebrows because of its sponsor.

According to a news release from Bennett’s office, the Israeli prime minister thanked the members for supporting funding for the Iron Dome missile-defense system.

The J Street sponsored delegation included Reps. Barbara Lee (D-Calif.), Jamaal Bowman (D-N.Y.), Mark Pocan (D-Wis.), Mondaire Jones (D-N.Y.) and Melanie Stansbury (D-N.M.), some of who have been critical of Israel on the floor of the House of Representatives.

However, the press release from Bennett’s office did not mention that the delegation was from J Street.

Earlier this week, the J Street delegation met with Foreign Minister Yair Lapid. Lapid thanked the delegation “for supporting the replenishment of the Iron Dome missile-defense system, and we discussed the importance of continuing to strengthen the U.S.-Israel relationship.”

The meeting was notable because the liberal lobby group had been shunned for years by former Prime Minister Benjamin Netanyahu. An Israeli government official told Israel Hayom that “J Street is the only lobby that defines itself as ‘pro-Israel,’ but actively opposes the policies of the [various] governments—whether this means actively supporting a return to the nuclear deal with Iran, or promoting members of Congress who oppose Iron Dome funding. When other lobbies don’t agree with Israel on a certain issue, they simply keep quiet and don’t take a position. [J Street] are the only ones who come out against [Israel]. Therefore the meetings with them, until [Monday], were at the lower levels.”

“Had the honor of meeting with children today in the occupied West Bank city of Hebron,” Bowman tweeted while on the trip, along with a picture of himself and other delegation members sitting with Palestinian children. “There are streets they cannot walk and places they cannot go, simply because they are Palestinian. When I asked about their dreams, their answer was simple: freedom. The occupation must end.”

Bowman was thanked in a retweet by J Street, repeating his sentiment.