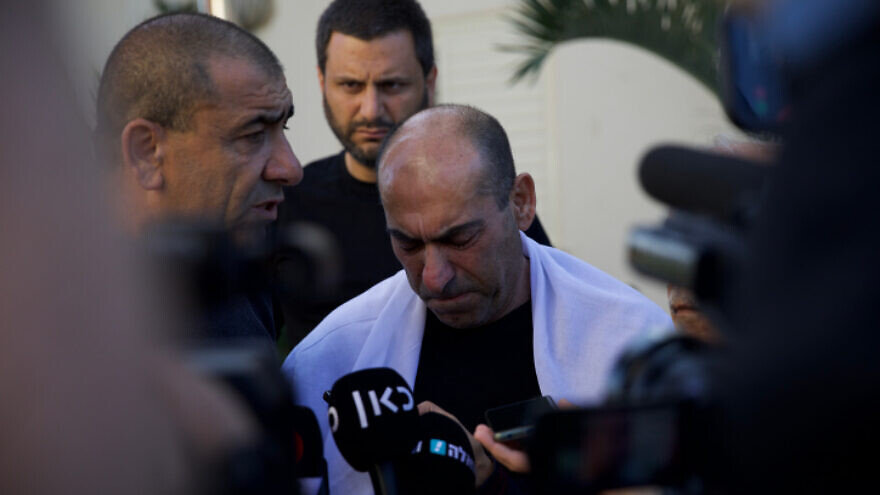 Eddie Fero, the uncle of Tiran Fero, who was killed in a car accident in Jenin and whose body was kidnapped by Palestinian gunmen. in Daliyat al-Karmel on Nov. 23, 2022. Photo by Shir Torem/Flash90.
Spread the word.
Help JNS grow!
Share now:

(November 24, 2022 / JNS) The body of a young Israeli man, that was snatched from a Jenin hospital by Palestinian gunmen on Tuesday, has been returned to his family, according to the Israel Defense Forces.

Tiran Fero, 17, a member of Israel’s Druze community, entered Jenin via the Gilboa crossing on Tuesday together with a friend to get his car repaired. He was severely injured in a car accident and hospitalized in Jenin, where he underwent surgery. According to the IDF, he died of his injuries soon afterwards.

Some time afterwards, dozens of Palestinian gunmen stormed the hospital, seizing the body and issuing demands for the release of bodies of terrorists. According to Israeli media reports, the gunmen believed that Fero was an Israeli soldier.

Mowafaq Tarif, the spiritual head of the Druze Israeli community, contradicted the IDF’s version of events, stating that the youth had still been alive when he was taken.

Speaking with Kan Reshet Bet on Wednesday, Tarif said that according to the teen’s father, who was at the hospital in Jenin, “After the accident he saw that his son was breathing. He was disconnected from the equipment and kidnapped while still alive. They took him while firing shots in the air. It was a very difficult scene.”

Leading the efforts to secure the release of Fero’s remains were IDF Maj. Gen. Rhassan Elian, the Israeli Coordinator of Government Activities in the Territories, as well as the head of the IDF Civil Administration, Brig. Gen. Fares Atila, according to Kan. Both Elian and Atila are Druze Israelis.

The body was loaded onto a Red Crescent ambulance at 3 a.m. and sent to Israel through the IDF’s Coordination and Liaison Office.

Fero’s funeral is scheduled to be held at Daliat al-Karmel, his native city, on Thursday afternoon.

Speaking to Kan Reshet Bet, Fero’s father, Hussam, said on Thursday, “My heart is torn. I lost a child who today should have been celebrating his birthday. Instead, I am holding a funeral for him.” The father thanked all of those involved in securing the release of the body.

Following the return of Fero’s remains, Israeli Prime Minister Yair Lapid said in a statement on Thursday morning, “Sending heartfelt condolences to the Fero family and the entire Druze community on the tragic death of Tiran, who was supposed to celebrate his 18th birthday today. Returning his body to his family is the least we could do to bring solace to their home. I thank everyone who worked in the past day to bring about this sad closure.”