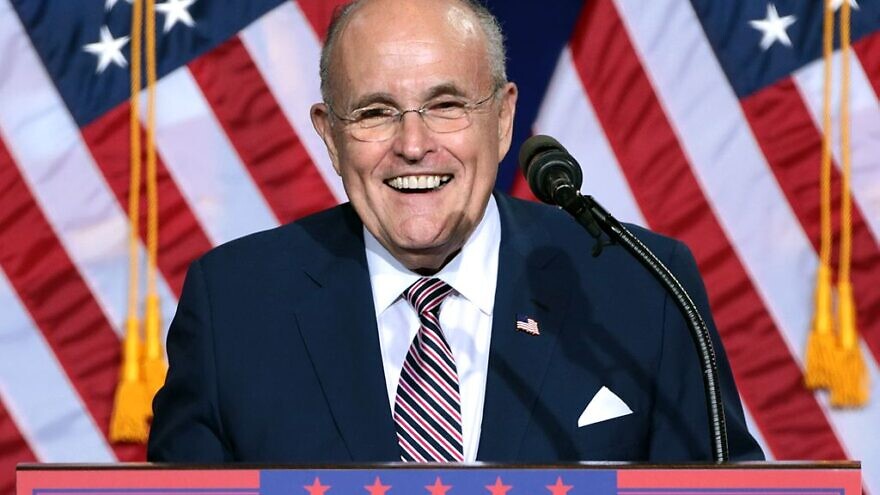 (October 26, 2020 / Israel Hayom) Former New York City Mayor Rudy Giuliani was attacked by a mob of anti-Trump activists on Sunday during a pro-Trump rally in Manhattan.

According to reports, members of the far-left Antifa movement gathered at the corner of Fifth Avenue and 59th Street to protest the “Jews for Trump” caravan passing through the city.

Videos posted on social-media show Antifa protesters hurling epithets at the caravan with some directing their vitriol at the former mayor. “F*** you, Rudy,” one man screamed.

Other protesters were seen throwing eggs at the caravan, including at Giuliani’s vehicle, while one person was filmed ripping a pro-police “Back the Blue” flag from one of the vehicles in the caravan.

Far-left demonstrators were also filmed accosting Trump supporters in Times Square, where they splashed paint on vehicles from the caravan, while fistfights broke out between the two sides.

Some 1,000 vehicles organized by the “Jews for Trump” movement set out from Monsey, N.Y.; Flatbush and Boro Park in Brooklyn; and Manhattan on Sunday, driving through the city for a rally in Marine Park.

Attacks on the convoy were reported in Manhattan and Brooklyn.

In one incident, a woman pepper-sprayed a Jewish family driving with the convoy. New York Police officers arrested seven suspects.