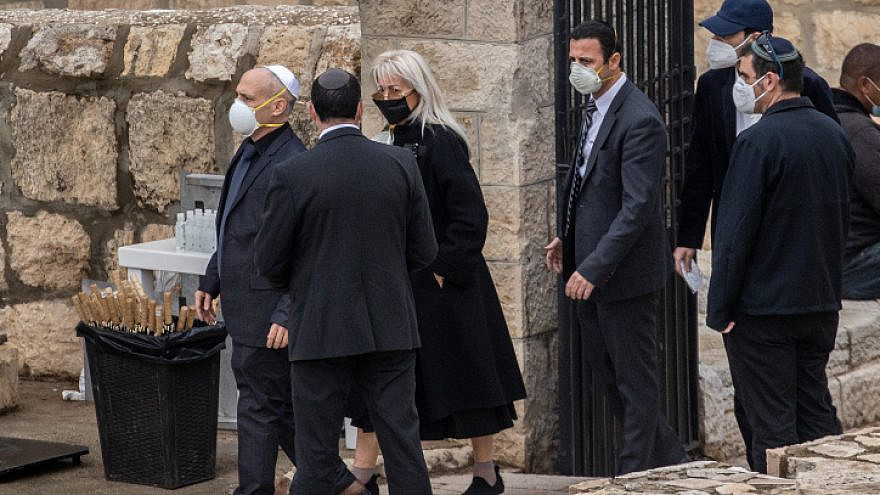 Dr. Miriam Adelson, wife of businessman and philanthropist Sheldon Adelson, arrives at her husband's funeral in the Mount of Olives in Jerusalem on Jan. 15, 2021. Photo by Yonatan Sindel/Flash90.
Republish this article
702 WORDS
Spread the word.
Help JNS grow!
Share now:

(January 15, 2021 / Israel Hayom) Businessman and philanthropist Sheldon Adelson, whose contribution to Israel and Jewish life throughout the world, was laid to rest on Friday in a private ceremony in Jerusalem with close family members present. He passed away on Jan. 11 at the age of 87.

Dr. Miriam Adelson, his wife and partner in so many of his projects, eulogized him as someone who could not be replaced due to his sheer impact on so many levels.

“It may seem strange, here in Jerusalem, the heart of Israel, which was so dear to Sheldon’s heart, I am eulogizing my husband, in English, rather than in Hebrew, but Sheldon never liked simultaneous translations, and as I speak now I feel that he can hear me,” she said.

“I feel him watching, listening to every word with every magnetic attention he lavished on me, each every day during our more than 32 years together. So here I am, Sheldon, adrift in endless pain, sustained with endless love. Saying, goodbye … Shalom.”

She recalled their many years together, and the joint effort to fight the illness.

“It was a privilege, Sheldon, each additional hour and minute and second that we had together was a gift, and I am sorry, so so sorry, that I couldn’t make it last longer. I do not want to accept this ending, I do not want to accept this final act. Ours is a love story that should go on forever, and it will go on, in my memory, in my agonized heart, which for as long as it beats, will beat for you and only for you.

“How powerful you were, Sheldon. You warmed and lit up people’s life like sunshine; you lifted them up, like the ocean waves, your spirit was like a tempest wind, undeniable, and now that you are gone, how will we go on? I look around Sheldon, at our children, at our grandchildren, at our friends, at the businesses we built, the charities, the historic political achievements … this will last. They will prosper to the benefit of all of humanity, and they will proudly bear your name and follow in your example.”

The ceremony was held in the ancient Jewish cemetery on the Mount of Olives overlooking the Old City of Jerusalem and the Temple Mount.

Dr. Adelson noted that “those buried here, on the Mount of Olives will be resurrected first,” once the Messiah comes. She said that she would one day renew their partnership, but “until then, until we are reunited, I will part with you with lines from one of our favorite songs.”

She then quoted from Bette Midler’s Wind Beneath My Wings: “You were the one with all the strength, a beautiful smile to hide the pain, did you ever know that you are my hero and everything I want you to know, I know the truth, of course, I know it, I would be nothing without you. Fly, fly, fly high against the sky. Thank you, thank you. Thank God for you, the wind beneath my wings.” The song was then played. 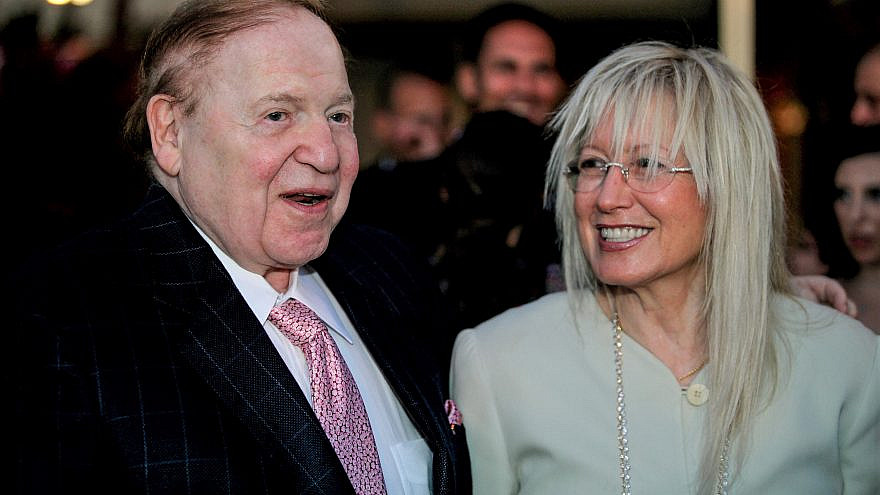 Adelson has been mourned by world leaders and prominent business figures around the globe since his death was announced earlier this week after a long illness.

His city, Las Vegas, which he helped reinvent itself, had massive marquee displays in his memory this week along the Strip.

In Israel and the Jewish world, Adelson was compared this week to other major Jewish philanthropists and Zionist giants, owing to his massive contribution to hospitals, universities and Jewish outreach programs (including hundreds of millions of dollars to the Taglit-Birthright project that brought hundreds of thousands of Jewish young people to the country), as well as to his relentless activities to helping make Israel stronger and more secure.

Many credit him for the successful effort to have the United States and other countries recognize Jerusalem as Israel’s capital, beginning with official American recognition in December 2017.

On Thursday, when Adelson’s casket arrived in Israel, Prime Minister Benjamin Netanyahu paid his respects and stood next to it for several minutes, later meeting with Dr. Adelson and other family members.