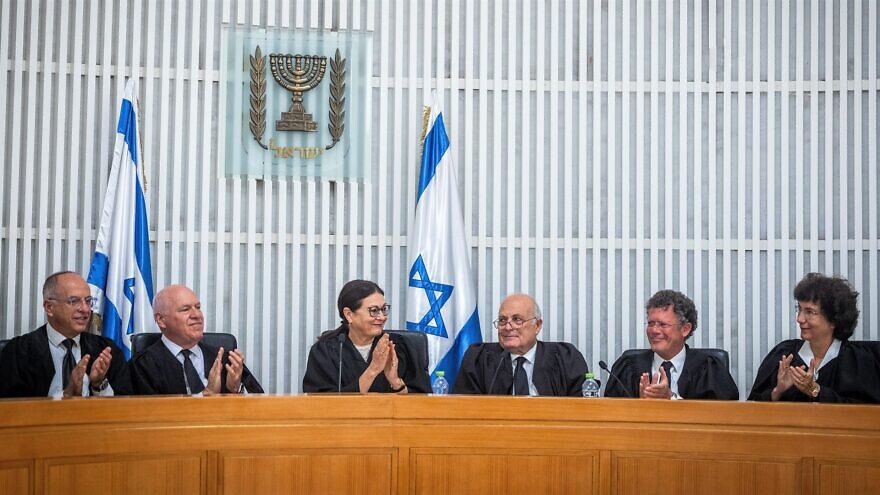 Israeli Supreme Court Chief of Justice Esther Hayut (center) with other justices at a ceremony held for outgoing Supreme Court Justice George Karra (to her right) at the Supreme Court in Jerusalem on May 29, 2022. Photo by Yonatan Sindel/Flash90.
Spread the word.
Help JNS grow!
Share now:

At a farewell ceremony, Karra, an Arab Christian, noted that “during the last five years, at a time when I served in the Supreme Court, the state and society in Israel saw polarizing political and social processes, that deepened the cracks between Arabs and Jews,” according to a report by Ynet.

During his remarks, the judge talked about his experience of being an Arab justice, stating: “As the son of the Arab minority, this period has not been easy for me.”

He added that during his rulings, “I expressed my opinions, and as I said sometimes to my interns, it is good to be in the majority opinion, but it is not terrible to be in the minority. Yet all of the divisions [in the court] were altruistic, for the sake of truth and the matter at hand.”

The outgoing judge called for the principle of equality to be enshrined in law, saying, “I don’t intend to express a stance on how this legislation should be anchored, but if it is done, it should encompass all of the state’s civilians.”

Karra, who served as a judge for 33 years, became known for his fight against organized Arab crime and received death threats following some of his rulings. He also drew criticisms for his refusal to sing Israel’s national anthem, “Hatikvah,” due to its lyric, “the Jewish spirit is yearning deep.”