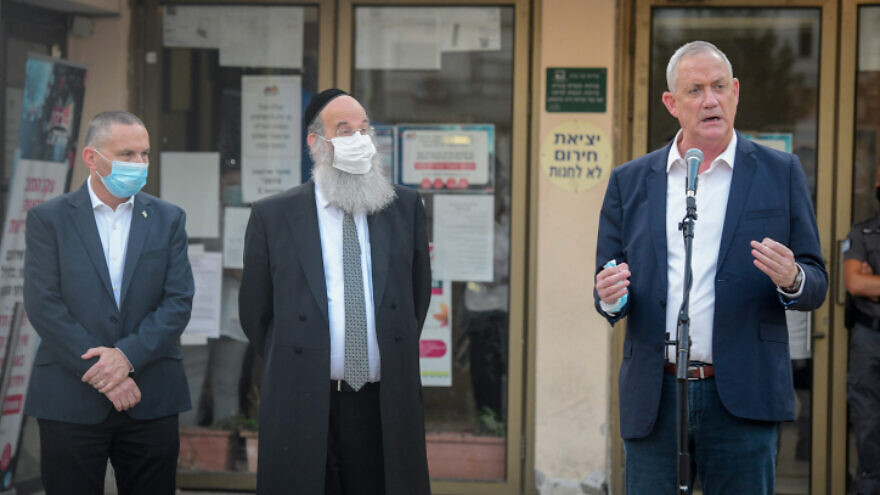 (October 21, 2020 / Israel Hayom) Israeli Defense Minister Benny Gantz on Monday vowed to dissolve the government if a state budget for 2021 isn’t passed by the end of October.

“If there is no budget, we’ll go to elections,” Gantz warned during a Blue and White faction meeting.

“I’m not willing to be held hostage to anyone’s political situation. I will not accept a government that does not collaborate, does not function. My priorities lie with the State of Israel, not with myself,” said the former Israel Defense Forces chief of staff.

Israel has been operating without a national budget for almost a year, a situation Gantz’s party wishes to end promptly.

The current government has struggled to pass a budget due to the terms of the Likud-Blue and White coalition deal, which contains a clause allowing Israeli Prime Minister Benjamin Netanyahu to retain the premiership should the government fall due to a budget not being passed.

The agreement contains a rotation deal under which Blue and White leader Gantz will take over the premiership from Likud leader Netanyahu in November 2021. If either party breaks up the coalition, sending the country back to elections, the leader of the other party automatically becomes interim prime minister. However, if the government falls and new elections are called due to a failure to pass a budget, Netanyahu remains prime minister until a new government is elected.

While Netanyahu has promised to pass a budget in December for the remaining days of 2020, Gantz is insisting that a budget for 2021 be passed at the same time, so as to eliminate the possibility of a government collapse which would prevent him from assuming the premiership as per the coalition agreement.

“If we don’t see this happening… we will examine another path to tread on,” said Gantz on Monday.

Israeli Foreign Minister Gabi Ashkenazi (Blue and White), however, took a more moderate tone on Tuesday, writing on Twitter: “Netanyahu still has time to change and work with us as partners. If Netanyahu doesn’t come around—enough is enough, it’s over. There’s no point.”

“All blackmail attempts by Blue and White and the attempts to link budgets to politics are unacceptable to me. I am personally in favor of stability and the existence of the government, but not in this way,” railed Katz.

JNS staff contributed to this article.