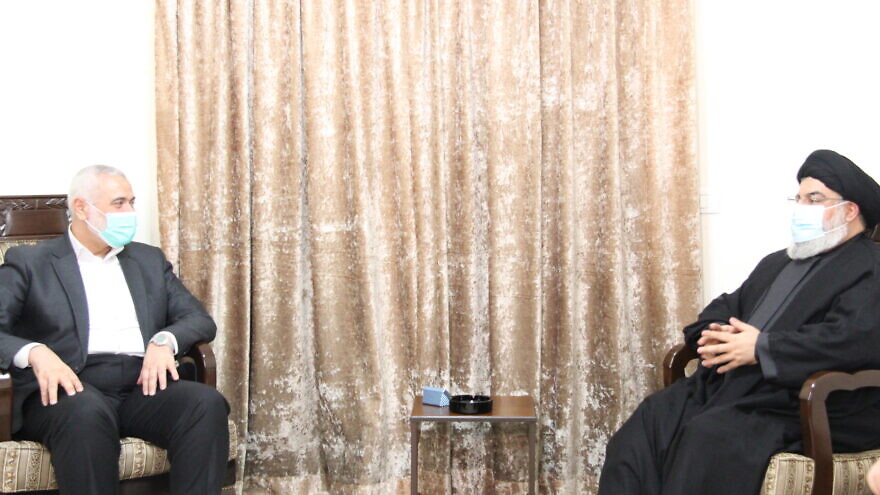 The two discussed recent developments in the region, as well as “the dangers to the Palestinian cause, especially the so-called deal of the century and normalization attempts by Arab regimes with the Zionist entity and the nation’s responsibility in this regard,” the statement said.

Haniyeh and Nasrallah emphasized the bond between Hezbollah and Hamas, which they said was based on “brotherhood, jihad, patience,” as well as a shared destiny. The two leaders stressed the stability of the “Axis of Resistance” (a political alliance between Iran, Syria and Hezbollah) in the face of “all forms of pressures and threats.”

Also on Sunday, Haniyeh visited the Ain al-Hilweh refugee camp in southern Lebanon, according to Al-Manar. During his visit, Haniyeh said the recent normalization agreement between the United Arab Emirates and Israel did not represent the true stance of the Arabs.

“Today’s meeting is in Beirut and Ain al-Hilweh, while tomorrow we will meet in Palestine and Al-Quds, God willing,” said Haniyeh, according to the report.

The Hamas leader stressed that the Palestinian “right of return” was “sacred,” and said that Hezbollah’s rockets “are the main retaliation to draw the map of Palestine on [the] battlefield.”

The rocketsof “the resistance,” said Haniyeh, could reach Tel Aviv and beyond.

“We came from Palestine to Ain al-Hilweh to say that Palestine is for us,” he told a packed audience at the Palestinian refugee camp.

The Hamas leader is in Beirut for a week-long visit to meet with other Palestinian factions over the warming relations between Israel and some Arab states, Al Jazeera reported.