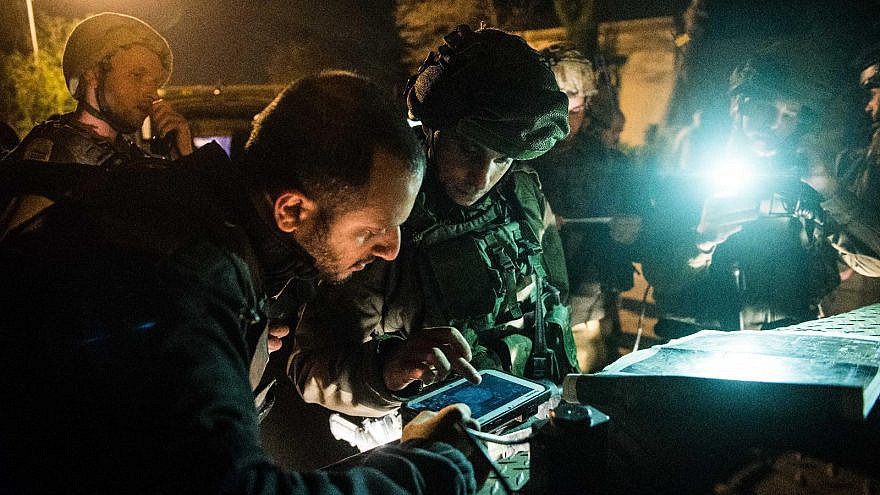 (June 14, 2021 / JNS) The Israel Defense Forces used a new version of an advanced combat management system that provided a real-time picture of friendly and hostile force locations during last month’s “Operation Guardian of the Walls” against Hamas in the Gaza Strip.

The Torch 750 system, made by Elbit, feeds devices held by field commanders with updated battlefield pictures of blue (friendly) forces and red (hostile) forces, as well as links ground forces to the Israeli Air Force and Israeli Navy in new ways.

Maj. Amos Shor, who heads the Torch project in the IDF Ground Forces’ Department of Weapons Development, told JNS that the device can come in the form of tablets or smartphones, which are connected to a sophisticated software-defined radio system for communications.

“We’ve been using Torch in drills and in operations in 2020, but during ‘Operation Guardian of the Walls,’ this was the first time we used it in a wide-ranging manner, even though the ground forces did not conduct a big maneuvering operation [in Gaza],” said Shor. “We’re dealing with an enemy that fires rockets at innocent Israelis in their homes. These are blood-thirsty, Islamic extremist terrorist organizations, like Hamas, which fires rockets from densely populated areas.”

“Revealing the enemy is a very challenging mission. One of the big benefits of the new Torch system is that it gets very high-quality positions of the enemy in real time, straight to the device of the platoon commander. No one needs to click anything. Algorithms automatically send the positions to the commander,” he explained.

“Our goal is that a platoon commander, when looking at his device, has a clear picture of all the forces. I mean everything—the navy, what’s in the air, the ground forces, infantry, tanks, headquarters, reconnaissance units—everything,” continued Shor. “This is the requirement. It might sound simple, but we know from our history in Lebanon and Gaza that, unfortunately, we have had incidents of friendly fire. Understanding the clear picture is our top priority.”

The IDF has been developing the Torch command and control digital system since 2010, but a completely new version has been rolled out to the ground units since 2020.

The upgraded capability means that the ground force’s Torch can now “talk” to the command networks used by the navy, air force and intelligence units. “This was the new requirement that was made of Torch,” said Shor.

The arrival of the Torch 750 system is part of the Israeli military’s digital transformation, which in essence is designed to convert the battlefield into a digital-based arena.

“Doing this requires all of the systems to work with each other and to connect not only with different systems, but also the weapons and control systems. So our system enables the commanders in the headquarters and the tactical commanders to have a clear picture of where the friendly forces are and where the estimated position of the enemy is,” explained Shor.

The elaborate radio system means that the logistics can operate much like a Wi-Fi connection, enabling units to plug in and begin receiving digital services. This technology allows quality intelligence to reach field commanders quickly.

It will also enable IDF units to receive rapid-fire support attacks and retaliate against enemy posts that are shooting at Israel, said the officer. “And you can only do this when you understand where everyone is, when you know you’re not hurting one of our guys, when you understand where the enemy is. Then, you can strike the enemy so he stops shooting. These are the main things that the device enables.”

Shor remembered how, as a company commander, he spent most of the day communicating with his headquarters or other units through verbal radio messages. He noted that when everyone speaks at the same time, messages don’t get through.

“Making everyone digital has a similar effect to the digitalization of civilian lives,” he said. “It’s like using smartphones for group messages, pushing out many messages to different units in seconds. This provides a big operational edge for our tactical units.”

Torch is continuing to undergo upgrades; the next challenge is to be able to use it to access drones and robotics, said Shor. “I think that’s the future, doing it through Torch.”