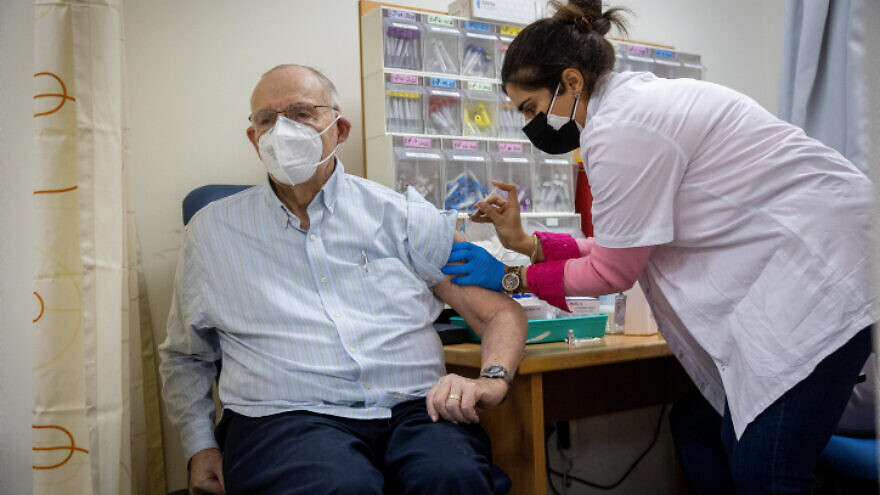 Adults over the age of 60 receive a fourth dose of the COVID-19 vaccine at Meuhedet vaccination center in Jerusalem on Jan. 4, 2022. Photo by Yonatan Sindel/Flash90.
Spread the word.
Help JNS grow!
Share now:

(January 17, 2022 / JNS) Taking a fourth dose of the Pfizer or Moderna mRNA coronavirus vaccine does not provide enough of a boost to protect against Omicron, Sheba Medical Center at Tel Hashomer said on Monday.

“What we saw with the third dose was that it was superior with respect to the second dose—much higher antibodies, much higher neutralization and the antibodies were not just higher in quantity but also in quality,” she said. “What we see now is an increase in the number [of antibodies] similar to what we saw after the third dose, meaning it is not really a booster. Maybe there are a few more antibodies but not much more compared to the third dose.”

Regev-Yochay noted that only slightly fewer people who received the fourth dose caught coronavirus than those in a control group, who were fully vaccinated with two shots in the last two months or three shots.

No numbers were shared during the briefing because the infections were so close to receiving the fourth dose; “they do not shed light but are only confusing,” said a spokesperson for the hospital.

However, the vaccine did ward off a serious case of illness. None of the trial participants who got the virus developed a life-threatening case of COVID. Moreover, said Regev-Yochay, the majority of severe patients in the hospital were unvaccinated or not fully vaccinated.

In total, 154 Sheba medical personnel received the fourth Pfizer shot and 120 received Moderna. All participants had received three shots of Pfizer at least three months before the additional inoculation. The participants were matched with a control group selected from some 6,000 medical personnel that the hospital has been tracking for both infection and antibody levels since the start of the country’s vaccination campaign on Dec. 19, 2020.

The Pfizer trial began on Dec. 26, only days before Israel started inoculating the elderly and medical workers with fourth doses. To date, more than 500,000 Israelis have received the fourth shot.

The goal of the trial, said Regev-Yochay, was to examine the effect of the fourth vaccine on antibody levels and disease prevention, as well as to evaluate safety. The researcher maintained on Monday that anyone who received a fourth dose, even if the individual did not gain as much protection as hoped, was not harmed.

She said she believed that it was “OK to give people at highest risk” of developing severe disease an extra jab because “some extra antibodies cannot hurt.”