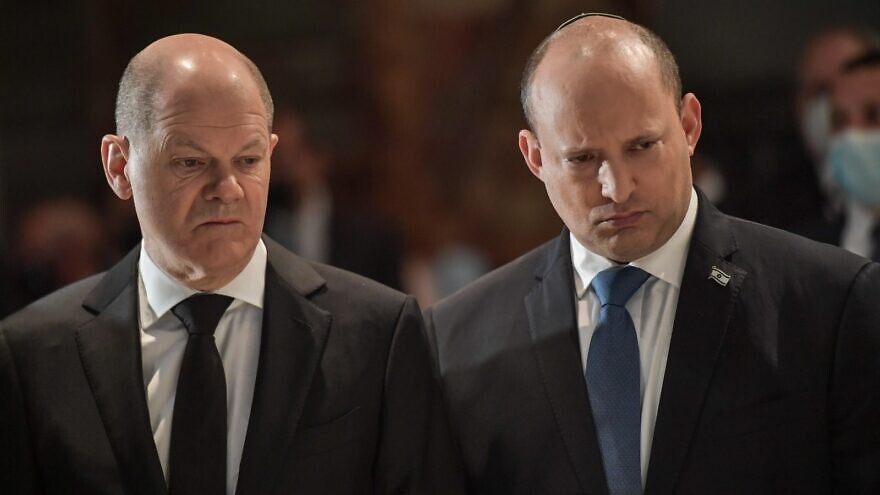 Bennett met with German Chancellor Olaf Scholz for about an hour-and-a-half and ate dinner with him. During the meeting, the two leaders discussed a number of issues, including the situation between Ukraine and Russia.

Scholz’s spokesperson released a statement following the meeting stating that the common goal remains to end the war in Ukraine “as soon as possible.”

Scholz was in Israel last week for his first official visit since taking office in December. He met with Bennett at Yad Vashem.

Bennett had a three-hour meeting with Russian President Vladimir Putin Saturday evening to discuss the war before heading to Germany.

The Israeli and Russian leaders also talked about the situation of Israelis and the Jewish community of Ukraine as a result of the conflict, according to a senior PMO official. Bennett stressed his opposition to the nuclear talks with Iran in Vienna and any deal that would result from them.

Bennett left for Moscow on Shabbat morning with a small Israeli delegation that included Housing and Construction Minister Ze’ev Elkin, who speaks Russian and served as a translator, the head of Israel National Security Council, Eyal Hulata, and Bennett’s spokesperson, Matan Sidi.

Russia invaded Ukraine on Feb. 24. The United Nation’s Human Rights Office of the High Commissioner (OHCHR) said that more than 330 civilians, including children, have been killed in Ukraine since the start of the offensive.

Bennett told Israel’s Channel 13 last week that Israel was being considered as a potential broker in talks between Russia and Ukraine.