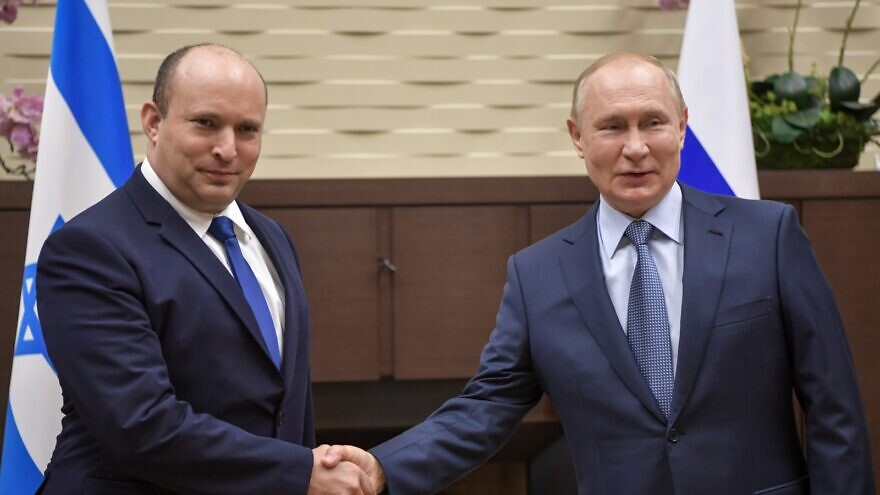 The meeting lasted three hours, according to a senior PMO official.

Bennett and a small group of advisers took off for Russia early Saturday morning, his office said. The two leaders had discussed the meeting during a conversation on Wednesday morning.

Included in the meeting were Housing and Construction Minister Ze’ev Elkin, who speaks Russian and served as a translator, the head of Israel National Security Council, Eyal Hulata, and Bennett’s spokesperson, Matan Sidi.

The prime minister was working in coordination with the United States, Germany and France, and though he has been in ongoing contact with Ukraine, Israeli media reported that he phoned Ukrainian President Volodymyr Zelensky on Friday and the latter refused to take his call, since he was aware of Bennett’s imminent visit to Moscow.

After the meeting at the Kremlin, however, Bennett and Zelensky spoke on the phone, according to subsequent reports.

Bennett and Putin also discussed the situation of Israelis and the Jewish community of Ukraine as a result of the conflict, the official said. Bennett stressed his opposition to the Iranian nuclear talks taking place in Vienna and an Iranian nuclear deal, as well.

Last week, Bennett told Israel’s Channel 13 that Israel was being considered as a potential broker in talks between Russia and Ukraine.

“Actually, there’s an advantage, and the various actors want us in a place where we can manage a dialogue with everyone,” he said.

Following the meeting, Bennett left for Berlin, where he is scheduled to meet with German Chancellor Olaf Scholz.