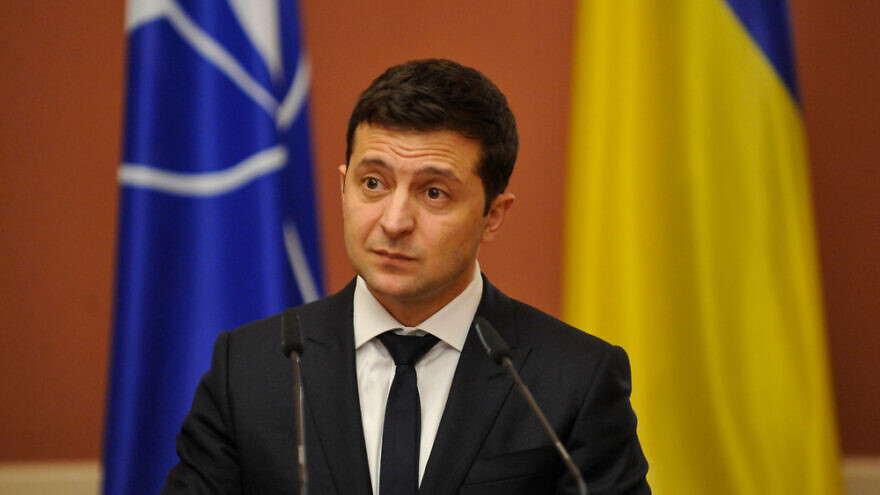 (December 21, 2021 / JNS) Ukrainian, Israeli, American and European leaders joined together online on Dec. 15-16 for the third-annual Kyiv Jewish Forum to discuss the historic relations between the Jewish and Ukrainian peoples, the rise of global anti-Semitism and the looming threats to both nations.

“We know what it’s like not to have our own state,” said Ukraine’s President Volodymyr Zelensky, referring to both Ukrainians and Jews. “We know what it means to defend one’s own state and land with weapons in hand at the cost of our own lives. Both Ukrainians and Jews value freedom, and they work equally for the future of our states to become to our liking and not the future others want for us. Israel is often an example for Ukraine.”

The two-day virtual forum was co-hosted by the Jewish Confederation of Ukraine, the Center for Jewish Impact, the Combat Antisemitism Movement (CAM) and the Euro-Asian Jewish Congress.

In his remarks, Israel’s President Isaac Herzog spoke about the increasing threat of anti-Semitism, which according to CAM’s statistics has risen by almost a third in recent months. He also spoke about the impact of his recent trip to commemorate the 80th anniversary of the Babyn Yar massacre.

“My visit to Babyn Yar just a few weeks ago will remain with me forever. It is the most compelling reminder that we cannot allow ourselves or the international community to disregard the deep destructive power of anti-Semitism,” said Herzog. “That we can never become complacent when it comes to threats of violence or hateful assaults against our sisters and brothers or against any human being. We must also reiterate that this is not just a Jewish issue. If allowed to fester, anti-Semitism ultimately lurks into other forms of intolerance and hate. It poisons our society and damages us all.”

Boris Lozhkin, president of the Jewish Confederation of Ukraine and founder of the Kyiv Jewish Forum, who has been at the forefront of expanding bilateral relations between Israel and Ukraine, laid out the importance of the event itself and the growing relations between the two countries.

“The main reason for holding this forum is the 30th anniversary of the establishment of diplomatic relations between the State of Israel and Ukraine, which will be celebrated in a few days,” said Lozhkin. “Around 500,000 people from Ukraine live in Israel today. During the 30 years since the establishment of relations, our countries have agreed on a visa waiver program, established a free-trade zone and have become reliable partners in many sectors, from agriculture and the information technology spheres to culture and medicine. The volume of trade has already reached $800 million a year, and this is just the beginning.”

‘Fighting for its independence’

Many of the speakers raised concerns over the geopolitical situation, especially the ongoing tensions between Ukraine and Russia.

Ukraine’s Prime Minister Denys Shmyhal shared a clear message of Ukraine’s right of self-determination as well as a strong identification with Israel.

“I’d like to give Israel special thanks for its ongoing support of Ukraine’s sovereignty and territorial integrity,” he said. “The voice of civilian and religious organizations on this matter is equally as important in letting the world know that Ukraine is currently fighting for its independence.”

While the 30 years of economic, social, military and diplomatic relations were at the center of the forum, Natan Sharansky, chair of the Babyn Yar Holocaust Memorial and a CAM advisory board member, reiterated the important historic cooperation and common yearning of both Jews and Ukrainians for independence and freedom from his time as a Soviet refusenik.

“During my time as a dissident in the former Soviet Union, I met with many Ukrainian democratic dissidents in the gulags, and we had a mutual dream how our peoples will live freely in their countries and how we will cooperate together,” Sharansky recalled fondly.

Robert Singer, chairman of the Center for Jewish Impact, said, “With recent polls showing that 44 percent of European Jews have experienced anti-Semitism, and 81 percent view anti-Semitism in their home countries as a serious problem, the Kyiv Jewish Forum is more important than ever before. [It] brings together world leaders and prominent figures from Ukraine, Israel and the U.S. as a united front against manifestations of Jew-hatred, while also recognizing Ukraine’s Jewish past and contemporary relations with the State of Israel.”

‘A culture of philo-semitism in Ukraine’

Elan Carr, former United States Special Envoy for Monitoring and Combating Antisemitism, told the conference the history of the Jewish people in Ukraine “is remarkable and extraordinary. One cannot talk about the Ashkenazi Jewish heritage of Europe without talking about the Ukrainian Jewish community,” he said.

He explained that one reason the forum is so important is that “we need to understand how a large percentage of that community came to an end.”

The second reason, he explained, “is to celebrate Ukraine today and how stunning the transformation of Ukraine has been. We know that during the Holocaust, far too many Ukrainians were enthusiastic collaborators with the Nazis in the extermination of the Jewish population of Ukraine.”

“This is a remarkable story,” he continued. “If we really want to fight anti-Semitism, it’s not enough to just point to the bad stories; we also have to hold up and champion the really excellent stories in the fight. Ukraine is a very, very important story in that fight against anti-Semitism, despite the fact that some of Ukraine’s neighbors have been trying to promote a story about Ukraine that is contrary to reality and undermining this incredible transformation from anti-Semitism decades ago to, in many respects, philo-Semitism today.”

Irwin Cotler, Canada’s Special Envoy on Preserving Holocaust Remembrance and Combatting Antisemitism, reminded the conference that this particular scourge is the “oldest, longest, most-endearing and most virulent of hatreds.”

“It is toxic to democracies,” he said. “It is an assault on our common humanities and is the canary in the mineshaft of global evil today.”

He said Canada is witnessing “an alarming rise in hate speech, both online and offline,” and noted that this summer the Canadian government convened the first-ever national summit to combat anti-Semitism, where he shared a 10-point action plan to combat the global phenomenon.

“This is a global threat,” said Cotler. Anti-Semitism is “an assault on our common humanity—a threat toxic to all democracies—and it requires a global response and global action plan.”

The event also featured an array of Israeli and Ukrainian leaders, including Israel’s Minister of Jerusalem Affairs and Housing and Construction Ze’ev Elkin; Minister of Education Yifat Shasha-Biton; and Ukraine’s Minister of Foreign Affairs Dmytro Kuleba and Minister of Internal Affairs Denys Monastyrsky. Other international speakers included European Commission Coordinator on Combating Antisemitism and Fostering Jewish Life Katharina von Schnurbein; U.S. Deputy Special Envoy to Monitor and Combat Anti-Semitism Aaron Keyak; and Commissioner for Monitoring and Combating Anti-Semitism of the Organization of American States Fernando Lottenberg, all of whom spoke on panels dedicated to studying the challenges of anti-Semitism and finding solutions.