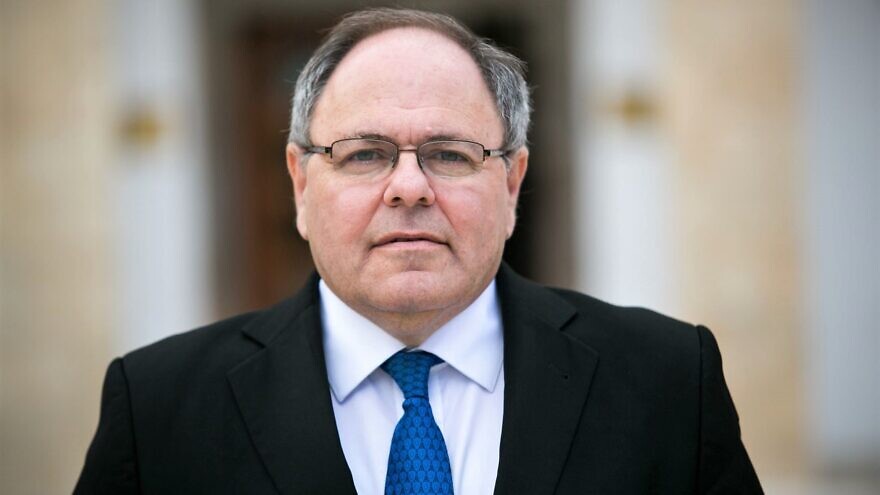 (November 12, 2021 / JNS) In his first visit back to the United States as chairman of the Yad Vashem World Holocaust Remembrance Center in Jerusalem, former Israeli Consul General in New York Dani Dayan seek to impart a sense of unity that he believes is an essential piece in knowledge of the Holocaust and Jewish identity around the world.

Dayan arrive in the United States this week to speak in Sunday’s virtual gala held by the American Society for Yad Vashem on the 83rd anniversary of Kristallnacht—the massive pogrom against Jews in Germany and Austria in November 1938.

“One of the interesting things that I value in Holocaust remembrance that Yad Vashem leads is that it’s one of the things that unites Jews across the ocean,” he said during an interview with JNS while on a train from Washington to New York. “There are many issues that divide us: political issues, religious issues and others, while the remembrance of the Holocaust is one that unites us in our pain, in our grief, and to some extent, also in the lessons we learn from the Shoah. So it is also important, it’s relevant, for the mission that I was very dedicated to when I was consul general in New York, and that is Jewish peoplehood and the unity of the Jewish people.”

Dayan started out his trip in Washington, visiting the U.S. Holocaust Memorial Museum and its collection center in Bowie, Md. In New York, he plans to reconnect with Jewish leaders and political acquaintances he got to know in his previous role from 2016 to 2020.

“It may surprise you,” he pointed out. “Holocaust denial is not a real issue today. There is no serious Holocaust denier except for the fringe elements on social media; no respectable leader or politician or figure will deny that the Holocaust happened. That was not the case 30 years ago, when there was a movement of denial even [among] intellectuals.”

He said that one of Yad Vashem’s missions was to fulfill the obligation to know about what happened in the Holocaust and teach the world the lessons that moral individuals should heed—lessons that are universal.

“One of the quotes that is most moving for me is that the Holocaust [was not] the assassination of 6 million Jews, but is 6 million assassinations of one Jew each. In the Holocaust, 6 million individuals were murdered, and we have an obligation both towards them and towards future generations to know everything about it,” said Dayan. “They expected us when they went to the gas chambers that we will not forget them, and we will strive to know exactly what happened to them.”

The lessons, he said, point to the necessity of an independent, robust and secure Jewish state, as well as the need to forcefully and immediately confront anti-Semitism wherever it is found.

“We know today what the generation of the 1930s didn’t understand. They didn’t believe that it can grow to monstrous dimensions. We know that today,” he said.

Dayan acknowledged that when he first came to the United States in 2016, he didn’t see anti-Semitism as the pressing issue it is today, believing that it might have been an “overblown phenomenon” in the United States.

“But then, during my term, 15 Jews were murdered in anti-Semitic attacks—11 in Pittsburgh; one in Poway, Calif.; two in Jersey City, N.J.; and one in Monsey, N.Y. So after 15 murders, it’s very difficult to claim that it is a bogus phenomenon,” he stated.

Contemporary issues of distortion and trivialization

Not only was anti-Semitism coming from the right—like the Unite the Right rally in 2017 in Charlottesville, Va., during his tenure—but a rise in thinly veiled anti-Semitism from the left posing as anti-Zionism. He also mentioned hatred stemming from Nation of Islam leader Louis Farrakhan, as well as that from the Black Hebrew Israelites, which influenced the attackers of a kosher market in Jersey City.

“We have to combat all its manifestations,” said Dayan. “When you not only see a society in which there are signs of anti-Semitism and bigotry, but regimes that are fanatic, fundamentalist and call for the annihilation of the Jewish state, you have to react immediately and forcibly because otherwise, it could come to a magnitude that will be impossible to deal with. I think that’s probably the most important historical lesson from the Shoah.”

The experience of the Holocaust is one the world didn’t always have as a reference. And thankfully, Dayan said that despite notable instances of and even an uptick in anti-Semitism, the kind witnessed these days in Europe and the United States is nowhere close to that of the 1930s.

“It may surprise you,” he pointed out. “Holocaust denial is not a real issue today. There is no serious Holocaust denier except for the fringe elements on social media; no respectable leader or politician or figure will deny that the Holocaust happened. That was not the case 30 years ago, when there was a movement of denial even [among] intellectuals.”

Rather, the biggest contemporary issues are distortion and trivialization of the Holocaust.

It most often comes from governments and political parties that more often than not attempt to erase the historical record of their own citizens’ culpability in atrocities. Examples of this can be found in Ukraine, Poland, Hungary and even France.

“Unfortunately, in European countries, the Nazis had collaborators—without them, it would have been impossible to carry out the malicious design, and those countries should acknowledge that,” he said. “It’s not enough to acknowledge that the Germans killed 6 million Jews; each country should also acknowledge what their own people did.”