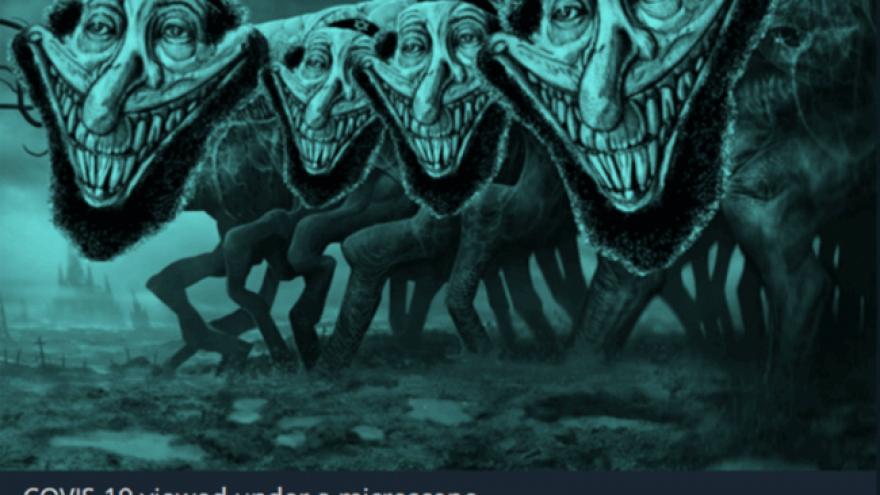 Anti-Semitism in the form of “COVID-19 under a microscope.” Credit: Kantor Anti-Semitism Report via www.adl.org/blog/coronavirus-crisis-elevates-antisemitic-racist-tropes.
Spread the word.
Help JNS grow!
Share now:

(April 27, 2022 / JNS) Nearly 80 years after the end of the Holocaust, the world’s oldest hatred continues to rise at alarming rates, despite an increased attempt to stem the tide of hate and the passage of the International Holocaust Remembrance Alliance’s (IHRA) working definition of anti-Semitism by more than 800 entities, including governments worldwide.

That is the consensus of a new global study on anti-Semitism from the Center for the Study of Contemporary European Jewry at Tel Aviv University, released on Wednesday in time for Yom Hashoah. It found that many major Jewish population centers—the United States, United Kingdom, Canada, Australia, France and Germany—saw significant increases in hate crimes against Jews in 2021.

For instance, Germany recorded 3,028 “politically motivated crimes with an anti-Semitic motive,” according to the report, which cites official statistics from Germany’s criminal police service. That represents a 29% increase from 2020 and a nearly 50% increase from 2019.

“[Last year] witnessed a dramatic rise in anti-Semitic incidents not just in comparison to 2020 but in comparison to 2019, that is before COVID restrictions were imposed,” said Professor Uriya Shavit, head of the Center for the Study of Contemporary European Jewry. “The main reasons? The rise of the radical right, the radical left and conspiracy theories that thrive on social media.”

Also leading to a significant hike in cases was Israel’s 11-day conflict with Hamas in the Gaza Strip last May, which saw more than 4,000 rockets launched at Israeli civilian populations, Arab rioting in mixed cities throughout the country and the start of “Operation Guardian of the Walls” by the Israel Defense Forces.

“The conflict exposed an unacceptable reality—when Israel defends itself from rocket attacks against civilian targets, Jews across the world become the target of incitement and hate crimes. Social media played an exceptionally alarming role in the process,” Dina Porat, a professor and founder of the center, wrote in the report. “According to the Israeli Diaspora Ministry, 431,000 anti-Semitic posts were published globally during the ‘Guardian of the Walls’ and the month preceding it.”

Also playing a role, said Porat, is that Jews are now finding themselves excluded from human-rights groups and not considered a minority.

“These activists believe that Jews do not a priori belong to their agenda, and thus the fight against anti-Semitism is not part of their larger struggle against racism,” said the report. “Racism, they argue, concerns African-Americans and African-Europeans, Roma, LBGTQs, indigenous minorities, asylum-seekers and foreign workers, but not Jews.”

“The lockdowns kept potential perpetrators—and potential victims—at home, making physical attacks harder to carry out,” said Porat. “At the same time, the enforced closures glued more people to their screens, thereby strengthening the power, impact and daily use of social media. The gradual easing of the lockdowns brought physical violence back to the streets—Germany and the United States are two prominent examples.”

Yet the use of social media did not diminish, she wrote. “On the contrary, it had become the leading guide and definer of identity for some, particularly the young. The expression ‘Judeovirus,’ which anti-Semites spread online, encapsulated the deep-seated superstitions against Jews.”

Still, the crucial issue is how anti-Semitism can be stopped.

“Something just isn’t working,” said Shavit. “In recent years, the fight against anti-Semitism has enjoyed extensive resources worldwide, and yet, despite many important programs and initiatives, the number of anti-Semitic incidents, including violent assaults, is rapidly escalating.

“The easy thing is to say that more laws and more funding are required,” he continued. “But what we really need is a courageous and unsparing examination of the efficacy of existing strategies.”