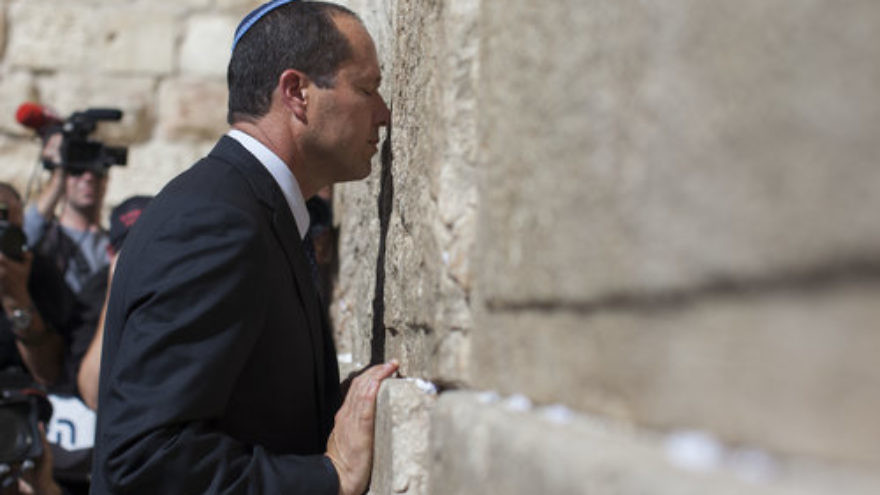 Jerusalem Mayor Nir Barkat prays at the Western Wall holy site. Barkat says that “moving the [U.S.] embassy to the capital of the Jewish people, to Jerusalem, is a straightforward, standard thing to do.” Credit: Yonatan Sindel/Flash90.
Republish this article
1154 WORDS
Spread the word.
Help JNS grow!
Share now:

(December 23, 2016 / JNS) The incoming Donald Trump administration’s stated intention to move America’s Israeli embassy from Tel Aviv to Jerusalem has been met with Palestinian opposition so vehement that one commentator describes the reaction as “making it look as if World War III will erupt.” But experts explain that such Palestinian threats are common, and that the proposed embassy move isn’t the massive policy change that it’s being made out to be.

Moving the embassy to Jerusalem would mark both a shift in longstanding U.S. policy and recognition of Israel’s full sovereignty in its contested capital. President-elect Trump has also drawn impassioned reactions to his appointment of a pro-settlement ambassador to Israel, his close friend and adviser David Friedman, a bankruptcy attorney.

Friedman, who speaks Hebrew fluently, recently served as president of the American Friends of Beit El, helping to raise millions of dollars for the large Beit El settlement in Samaria—including a $10,000 donation in 2003 from Donald Trump.

Upon being named ambassador, Friedman said he intended to “strengthen the bond between our two countries and advance the cause of peace within the region,” adding that he looked forward “to doing this from the U.S. embassy in Israel’s eternal capital, Jerusalem.”

Calls for the embassy move have been heralded within Israel by Prime Minister Benjamin Netanyahu and others, including Jerusalem Mayor Nir Barkat.

“The United States of America has embassies in all of the world’s capitals with the exception of Israel,” Barkat said. “That’s absurd, and moving the embassy to the capital of the Jewish people, to Jerusalem, is a straightforward, standard thing to do.”

Yet the move has been panned by the Palestinian Authority, which has insisted—along with many sympathetic members of the international community—that Israeli sovereignty over Jerusalem is an issue that should be reserved for final-status negotiations to resolve the Israeli-Palestinian conflict. Longtime Palestinian negotiator Saeb Erekat recently warned that moving the embassy could effectively “destroy the peace process,” and threatened that the move would send the region into a “path of chaos, lawlessness and extremism.”

Erekat also stated that “the issues for negotiations” within the peace process are “Jerusalem, borders, settlements, the regime, security,” adding that “no one should preempt or prejudge, because this will be a destruction of the peace process as a whole.”

Typically, any country’s foreign embassies are located in the capital city of a country. Despite the fact that Israel set up its capital in Jerusalem with the founding of its modern state in 1948, many nations, including the U.S., have established their embassies in Tel Aviv as part of a refusal to recognize Israel’s annexation of eastern sections of Jerusalem and the unification of the city following the Jewish state’s victory in the 1967 Six-Day War. Jordan controlled eastern Jerusalem from 1948-1967.

Israel has been pressing nations for decades to move their embassies to Jerusalem. In 1995, Congress passed the Jerusalem Embassy Act, calling for the U.S. embassy to be officially moved by 1999. But the measure included a provision in which the president could postpone the move every six months by executive order “to protect the national security interests of the United States.” Since the act’s passage, Presidents Bill Clinton, George W. Bush and Barack Obama have each continuously exercised this provision, with Obama signing the most recent six-month waiver in November.

If Trump wishes to move the embassy, all he would need to do is not sign the upcoming waiver, according to U.S. law. As such, Trump and Friedman’s resolve to move the embassy in the face of Palestinian threats may represent a litmus test for an incoming administration that has been openly challenging the current nature of U.S. diplomacy toward Israel.

Israeli-Arab journalist Khaled Abu Toameh, a well-known reporter on Palestinian affairs, said that Palestinian Authority officials are “making it look as if World War III will erupt if the embassy is moved.”

“They want the status quo to continue,” Abu Toameh told JNS.org. “They are opposed to any real changes on the ground. And they are now trying to rally the entire Arab world behind them.”

According to Lenny Ben David—the former deputy chief of mission at the Israeli Embassy in Washington, D.C., and a former director of the American Israel Public Affairs Committee’s Israel Office—the Palestinians want to keep Jerusalem within “the realm of territorial dispute.”

“Much of Palestinian opposition to moving the embassy is the myth that this is a monumental policy change,” Ben David, currently the director of communications for the Jerusalem Center for Public Affairs think tank, told JNS.org. “The myth is that moving the embassy will cut off any possibility for American representation to the Palestinians.”

At the same time, Ben David explained that moving the embassy represents “a reality check.”

If the U.S. moves the embassy, Ben David cautioned that the event does not need to be blown out of proportion, and that it “should be done gradually, bureaucratically.” The U.S. already runs a consulate in Jerusalem—a large modern facility built to handle many of the functions of an embassy—and as such, the embassy move could take place quickly and relatively quietly. “You can just change the name on the door” from consulate to embassy, Ben David noted.

The move could begin, he said, with American cables to the new ambassador being sent to Jerusalem, Israel, rather than to Tel Aviv.

“Yet, if I were writing American or Israeli policy, I would not make this a major event with pomp and circumstance,” Ben David said.

Abu Toameh, a senior distinguished fellow for the Gatestone Institute think tank, said that “Palestinians on the street will not be affected by any decision to move the embassy, and they are not complaining. Why should Palestinians be concerned if the embassy moves to Jerusalem? It is only Palestinian officials that are making this an issue.”

In the past, he said, Palestinians have vowed “that if Jews started going up on the Temple Mount, that World War III would erupt. And it didn’t. This is just another threat.”

“The question is whether the Trump administration will succumb to the threat,” Abu Toameh said.