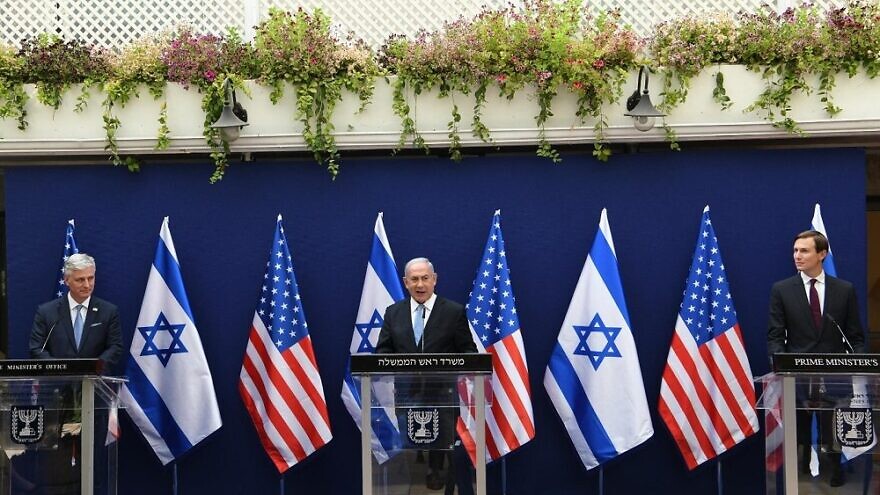 (August 30, 2020 / Israel Hayom and JNS) Israeli Prime Minister Benjamin Netanyahu touted the newly announced normalization deal with the United Arab Emirates as a game-changer for the region that could upend the underlying paradigm previously governing the peace process, at a joint Israeli-American press conference in Jerusalem on Sunday.

Speaking a day before Israeli and U.S. officials were to board the first-ever direct official commercial flight from Israel to the Emirates, Netanyahu said the agreement would make regional peace a function of mutual interests between parties rather than a byproduct of relations between Israel and Palestinians.

Netanyahu reiterated his praise of U.S. President Donald Trump’s “Peace to Prosperity” vision, unveiled in January, saying it would allow Israel to extend its sovereignty to certain areas in Judea and Samaria without requiring the eviction of settlers. “It is the first realistic vision for peace with the Palestinians,” he said.

Referring to the chances of peace between Israel and Sunni Muslim Gulf States long-opposed to relations with Israel, Kushner stated, “We worked to defy the odds and achieve something few thought was possible.”

Kushner added that the president’s vision for peace in the war-torn region is “writing a script for a new Middle East.”