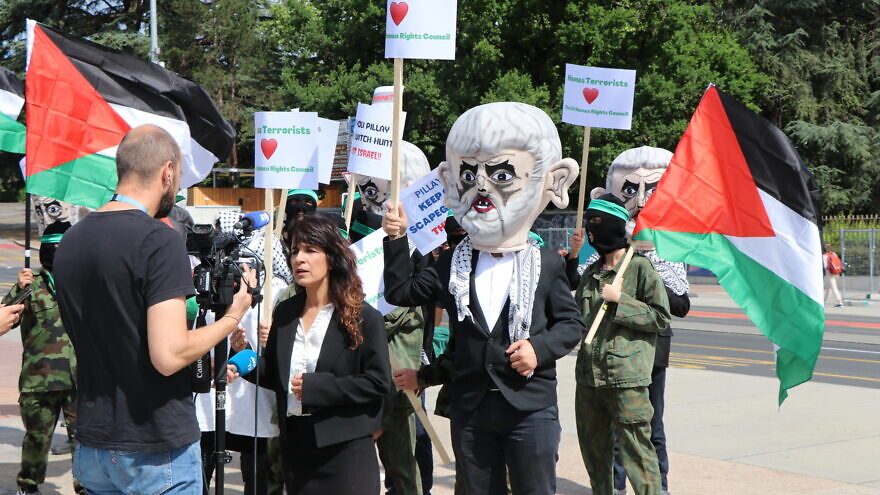 (June 8, 2022 / JNS) Pro-Israel observers say the findings of the first report by the U.N. Human Rights Council’s (UNHRC) Commission of Inquiry, released on June 7 and that blamed Israeli “occupation” as the root cause of the Arab-Israeli conflict, were a foregone conclusion given the anti-Israel bias of the three commission judges and the council’s long history of singling out Israel for condemnation.

“This is Goldstone 2.0,” said Nitsana Darshan-Leitner, founder of Shurat HaDin Israeli Law Center, referring to the 2009 U.N. report by the United Nations Fact-Finding Mission on the Gaza Conflict, popularly known as the Goldstone Commission, which accused Israel of war crimes during its 2008 operation against terrorists in the Gaza Strip.

Noting that it was the Goldstone Commission that spurred widespread accusations of war crimes against Israel that continue until the present, Darshan-Leitner said the stakes are high as the new commission, which was created in the wake of the May 2021 conflict between Israel and Hamas, will paint Israel as an apartheid state. “That immediately raises the conflict to the next level. What do you do to an apartheid state? You do to it what you did to South Africa,” she said. “You start to sanction it. You start boycotts to pressure it to consent to whatever conditions you want it to meet. This is the danger.”

Darshan-Leitner expects the commission’s reports to be used as ammunition against Israel at the International Criminal Court in The Hague, which could lead to Israeli soldiers finding themselves placed under arrest at international airports.

“The Human Rights Council of the U.N. is the most anti-Semitic body in the world,” she stated.

“You can’t play by their rules. Their game is we have to accept the judgment of their court, which is biased against Israel. We need to be creative in how we fight it,” she said, speaking from Geneva, where the council is headquartered and where her group kicked off a public and legal campaign against the council with a street protest of 25 IDF [Israel Defense Forces] reservists and students, which included former Israeli soldiers costumed as terrorists and applauding the UNHRC for its “anti-Israel prejudice, blood libels against Israel and its whitewashing of the murderous Hamas rocket attacks on Israeli cities.”

‘It’s unlike any other commission of inquiry’

“Ultimately, the Jewish state never had a chance when Hamas was omitted from the mandate of this commission,” said Arsen Ostrovsky, CEO of the Israel-based International Legal Forum, noting that the report mentions Israel 157 times and Hamas only three times, “but even then, it cannot bring itself to condemn Hamas. There is not even a semblance of intellectual honesty or impartiality. They’re not even trying anymore to disguise their blatant anti-Semitism.”

The Commission of Inquiry is “truly unprecedented,” he said. “It’s unlike any other commission of inquiry or any country-mandated, fact-finding mission in that it’s completely open in terms of geographic scope and time, meaning this commission is mandated to last in perpetuity. It has a mandate to look at ‘underlying root causes’ of the conflict between Israel and Palestinians going back before 1948 when the state was created and indefinitely into the future.”

As for the appointment of South African judge Navi Pillay to chair the commission, Ostrovsky noted that she has “a long-standing bias and really virulent hostility towards Israel,” adding that her appointment is a “flagrant violation of the U.N.’s own rules,” which clearly state that commission members must have a “proven track record of impartiality and independence, something which she most certainly lacks.”

The other two commissioners—Miloon Kothari and Chris Sidoti—are also known for their anti-Israel bias. “One of them has accused Israel of ethnic cleansing and the other has called for embargoes,” he said.

“Any court of law in any Western democracy would never have appointed someone like Pillay, but at the United Nations, you get promoted and rewarded for such anti-Semitism and hostility,” he said.

Ostrovsky said his group is working with partners around the world, encouraging friends in Western democracies to speak out against the commission and “not lend any credence to its findings.”

Darshan-Leitner said her group will focus on the United States, noting that when the Biden administration decided to rejoin the U.N. Human Rights Council, which the previous administration left due to its chronic bias against Israel, it said it would defend U.S. allies at the council.

“We want the United States to keep its promise and to stand up for the State of Israel,” she said. “They should use all means to block this inquiry, including defunding the U.N. Human Rights Council or, if necessary, the entire body of the U.N.”

The council will meet on June 13, one of its three regularly scheduled yearly meetings, at which the report will be presented. The Commission of Inquiry will also hold a press conference on June 14.