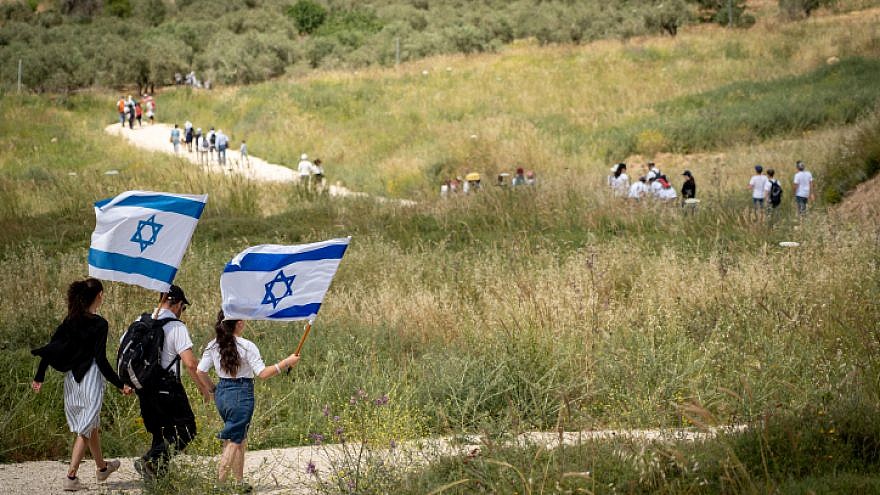 Israelis participate in a march to celebrate Israel's 71st Independence Day near Havat Gilad in Judea and Samaria on May 9, 2019. Photo by Hillel Maeir/Flash90.
Spread the word.
Help JNS grow!
Share now:

(May 10, 2020 / JNS) A majority of Jewish Israelis (52 percent) support Israeli Prime Minister Benjamin Netanyahu’s plan to apply sovereignty in Judea and Samaria, according to a poll published on Sunday.

However, only 32 percent of Jewish Israelis actually think the government will actually annex any territory, according to the Israeli Voice Index for April carried out by the Israel Democracy Institute.

Among Jews, 71 percent of those on the right support annexation of parts of Judea and Samaria, while in the center the figure is 31 percent and on the left only 8 percent.

On security issues, the most optimistic were Jews on the right (82 percent), followed by the center (69 percent) and the left (53 percent).

As to what rights the Palestinians living in the annexed areas should have, most Jews (37 percent) said they should not be changed while among Arabs, the most common opinion (47 percent) was that these Arabs should be given citizenship.

With regard to national security issues, optimism among Jews was at 75 percent, while among Arabs it stood at only 43 percent.

The survey was conducted by the Guttman Center for Public Opinion and Policy Research at the Israel Democracy Institute online and by telephone from April 30 to May 3. Of the 769 respondents, 615 were interviewed in Hebrew and 154 in Arabic.