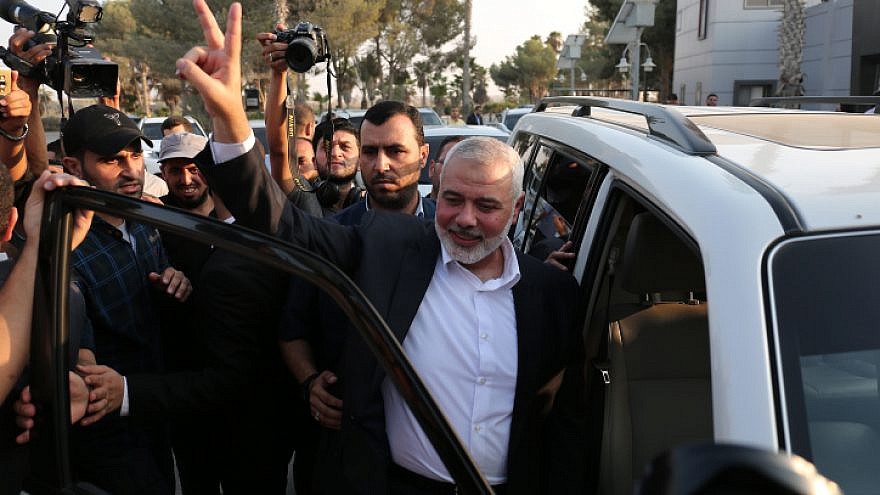 (January 23, 2020 / Israel Hayom) The leadership of Hamas is at odds over Hamas political bureau head Ismail Haniyeh’s decision to travel to Tehran earlier this month to attend the funeral of Iranian Quds Force commander Gen. Qassem Soleimani, who was killed in a U.S. drone strike at the Baghdad International Airport on Jan. 3.

The trip ruffled the feathers not only of Egypt, but also among several Salafist terrorist organizations in Gaza, which are now threatening retaliation against Hamas over the visit, and inside Hamas itself. According to a report in Independent Arabia—a joint project between the Saudi-based Media Arabia and British daily The Independent—Haniyeh’s predecessor Khaled Mashaal has leveled scathing criticism at Haniyeh over the move, which he labeled a “strategic mistake.”

Mashaal, who assumed Hamas’s leadership in 1996, resigned in 2017 and named Haniyeh as his successor alongside Yahya Sinwar, who was named the group’s military leader. Lately, however, he has been rumored to be eyeing a political comeback.

“The trip was a strategic mistake. Sending a small delegation to Soleimani’s funeral would have been enough,” said Mashaal, according to the report. Haniyeh had made a “rash decision,” said Mashaal, especially in light of Haniyeh’s promises to Cairo.

Egyptian authorities set conditions on Haniyeh before allowing him to leave Gaza, with which he pledged to comply. The conditions included a ban on travel to Iran or Lebanon and meetings with Iranian and senior Hezbollah officials.

Tensions with Egypt are so great that it remains unclear whether Egypt will allow Haniyeh, who is currently on a visit to Malaysia, to return to Gaza through its Rafah border crossing, according to the report.

The visit also stoked tensions with Jordan, which has refused a request by Haniyeh to travel to Amman over his visit to Tehran, and with Saudi Arabia—Iran’s chief adversary in the Persian Gulf.

The Lebanese daily also claimed that Hamas’s military wing also endorsed the visit, despite the tensions it may cause with the Salafist groups.