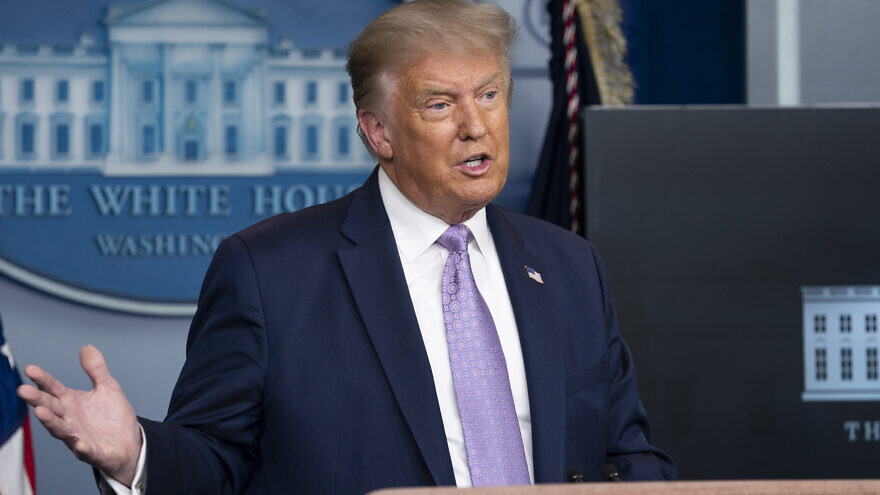 (August 16, 2020 / JNS) U.S. President Donald Trump on Saturday vowed to use a provision of the Iran nuclear deal to unilaterally reinstate United Nations sanctions on Iran. His announcement came a day after the U.N. Security Council voted down an extension to the arms embargo on the Islamic Republic.

“We’ll be doing a snapback. You’ll be watching it next week,” said Trump during a press conference at his resort in Bedminster, N.J.

Trump referred to a controversial argument that the United States remains a “participant” in the 2015 agreement, known as the Joint Comprehensive Plan of Action (JCPOA), despite its stated withdrawal from the JCPOA in May 2018. Consequently, he says it can force a return to sanctions, according to a provision of the deal, if it sees Iran as being in violation of the deal’s terms.

According to the 2015 deal, the arms embargo on Iran will expire on Oct. 18. Despite having exited the JCPOA, the Trump administration has sought for months to extend the ban.

The vote on Friday night saw the United States and the Dominican Republic favor an extension, Russia and China opposed it, and the other 11 members of the U.N. Security Council abstained, including all of the European members.

“The decision of the U.N. Security Council not to renew the arms embargo on Iran is scandalous,” he said said in an official statement. “Iranian terrorism and aggression threaten the peace of the region and the entire world. Instead of opposing weapons sales, the Security Council is encouraging them. We will continue to act in close cooperation with the U.S. and countries in the region to block Iranian aggression. The State of Israel will continue to act with full force against whoever seeks to undermine its security.”