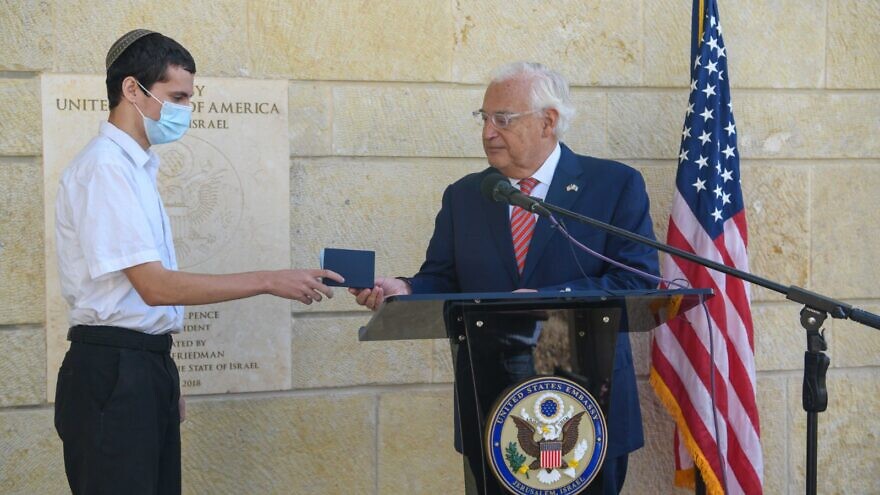 Menachem Zivotofsky was the first to get such a passport, handed to him by U.S. Ambassador to Israel David Friedman at a brief ceremony at the U.S. embassy in Jerusalem.

A great honor to present the very first passport issued to an American citizen born in Jerusalem with the place of birth designated as “Israel” to Menachem Zivotofsky, who first applied 18 years ago and litigated twice before the US Supreme Court.
Mazal Tov! pic.twitter.com/IIoOkVP3jS

The ceremony came the day after U.S. Secretary of State Mike Pompeo announced that American citizens born in Jerusalem are now allowed to list Israel as their place of birth on their American passport.

“Consistent with [U.S.] President [Donald] Trump’s Jerusalem Proclamation of December 6, 2017, and the historic opening of the U.S. embassy in Jerusalem on May 14, 2018, today I am announcing updates to the Department’s guidance on passports and other consular documents issued to U.S. citizens,” said Pompeo in a statement.

In 2015, the U.S. Supreme Court ruled in Zivotofsky v. Kerry that the executive branch has the sole power to grant recognition to sovereign states, striking down a move by Congress to command the executive to change its position on Jerusalem. While at the time the ruling was a victory for the Obama administration, which had been upholding a policy recognizing no state as having sovereignty over Jerusalem, it now has allowed the Trump administration to change course on the issue.