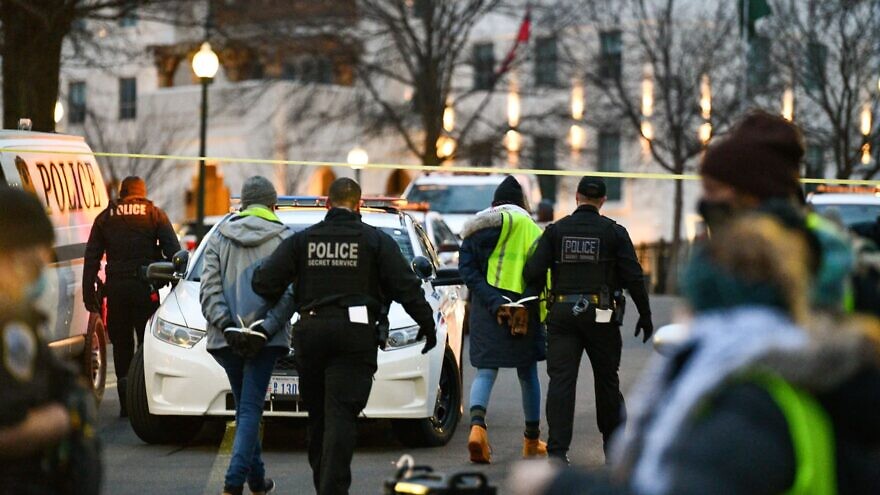 (January 24, 2022 / JNS) Seven anti-Israel protesters were arrested on Sunday in front of the Israeli embassy in Washington, D.C., after attempting a sit-in, blocking the entrance to the embassy.

According to the United States Secret Service, which conducted the arrests, protesters were arrested at 4:41 p.m. for failing to obey orders from officers and “incommoding,” which is defined as an individual or group of individuals blocking or obstructing roads or entrances.

The protesters were part of a group called the Palestinian Youth Movement (PYM), which conducted anti-Israel rallies across the country on Jan. 23.

The D.C. rally, called “Hands off Palestine: From the River to the Sea,” was scheduled from 2 p.m. to 3 p.m., according to PYM’s Twitter account.

A handful of the 50 or so protesters remained afterwards, pitching tents in front of the embassy gates, according to the account, and refusing to move when instructed by the police. They called the action a “sit-in.”

The protesters were released from jail later that night.

“Demonstrators courageously stood their ground outside the embassy, demonstrating their support and commitment to Palestinian resistance against ongoing ethnic cleansing,” tweeted PYM. “In Palestine and across the diaspora, our people will continue to struggle ceaselessly until the full liberation and unconditional return of all Palestinians to our homeland—from the river to the sea.”

Areas outside the embassy are public property; it has no control over who can demonstrate there if they hold permits from the city.

The Palestinian Youth Movement was founded in 2007 and has chapters in more than 30 countries, including the United States, where it is most active in California. The group frequently collaborates on events and protests with anti-Israel pro-BDS groups such as American Muslims for Palestine, U.S. Campaign for Palestinian Rights and Jewish Voice for Peace.

It has also coordinated with groups with ties to Palestinian terror groups such as Samidoun and Addameer, which are affiliates of the U.S.-designated terror group the Popular Front for the Liberation of Palestine. Addameer is one of six Palestinian NGOs designated as a terror group by the Israeli government in October 2021.