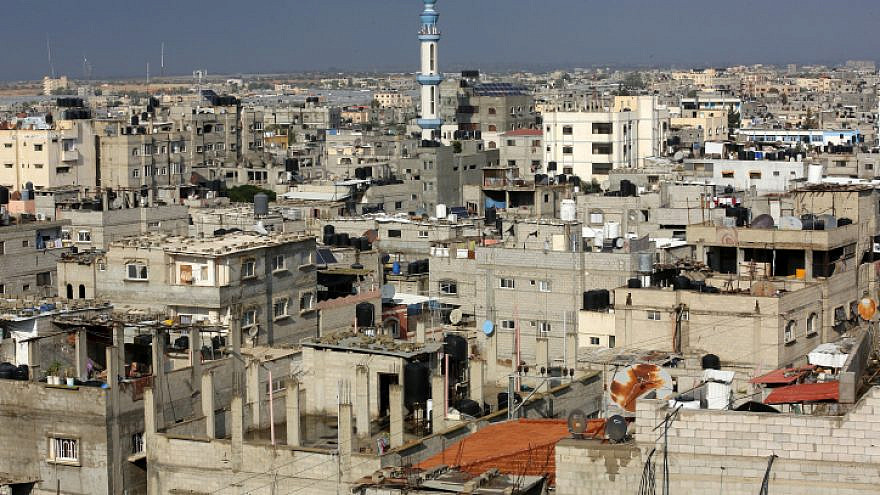 (January 4, 2021 / JNS) In the final days of 2020, the Israel Defense Forces released its annual figures for the year, and the data revealed that the Gaza Strip remains the least stable and most explosive arena in Israel’s environs.

While the Hamas regime in Gaza and its terror army, the Izz ad-Din Al-Qassam Brigades, are unlikely to initiate war with Israel at this time—preferring instead to preserve Hamas’s rule by seeking economic relief and coping with the coronavirus pandemic—any small tactical flare-up involving Hamas or one of the other armed terror factions could still quickly escalate into a broader conflict.

In addition, Hamas could soon turn to “pressure tactics” to try and convince Israel to reach a longer-term arrangement with it—a campaign that could backfire and snowball into conflict.

Other factions in Gaza, such as the Iranian-backed Palestinian Islamic Jihad, are not weighed down by complicating factors like the need to preserve a governing regime or concerns over Gaza’s gravely ill economy, and therefore have a freer hand to initiate escalations.

The fact that Hamas and Palestinian Islamic Jihad continue to produce rockets and a range of other weapons means that Gaza is home to a growing arsenal of firepower, embedded deeply within and underneath Gaza’s sprawling urban neighborhoods in a deliberate policy of human shielding.

Recent comments by Palestinian Islamic Jihad Secretary-General Ziad Nakhaleh, who addressed a memorial event in Tehran to mark the assassination of Iranian Quds Force Gen. Qassem Soleimani in Baghdad in a U.S. drone strike one year ago, shed light on Iran’s considerable contribution to building up Gaza’s terror factions.

According to Nakhaleh, the Iranian “resistance” axis worked to smuggle weapons into Gaza and invited Hamas operatives onto Syrian military bases to train them in rocket building methods.

Hamas has been in possession of Kornet anti-tank guided missiles since 2012 and has also gotten hold of long-range rockets and mortars, thanks to the efforts of Soleimani.

Soleimani also came up with the idea of training Gazan engineering units to set up their own domestic-weapons production industry in the Strip—an initiative that proved extremely valuable to Hamas and Palestinian Islamic Jihad after Egypt destroyed many smuggling tunnels linking Gaza to the Sinai Peninsula, making weapons smuggling much harder.

Today, Gaza’s weapons-builders can and do create their own long-range rockets, some of which were recently fired into the Mediterranean Sea by Gazan factions in a joint war drill, allegedly reaching a 100-kilometer range. The weapons-production units also know how to build their own mortar shells, rocket-propelled grenades and an array of explosives.

The working assumption in the IDF is that enemies will possess capabilities in five years that they do not have today, and that every Israeli military advance will create a counter-reaction on the side of adversaries, who will study the Israeli advantage and change their own arsenal and preparations accordingly.

2020 in review and looking ahead

According to the IDF’s annual data, in the past year, Gazan terror organizations fired 176 rockets at Israel in 2020 with 90 of those hitting open areas and 80 intercepted by the Iron Dome air-defense system.

The IDF recorded 38 attempts to breach the border from Gaza, and detected and destroyed a new tunnel dug by Hamas into Israel, using new technology in Israel’s underground barrier, designed to end Hamas’s attack tunnel project. That barrier is nearly complete, while 45 kilometers of the new above-ground fence, which brims with advanced sensors, was also built this year.

The IDF struck around 300 targets in the Gaza Strip in the past year—most of them belonging to Hamas—in retaliation to rocket attacks primarily launched by smaller Gazan factions as part of Israel’s policy of holding Hamas responsible for all that occurs in Gaza.

In comparison to past years, such figures represent a relatively low level of conflict with Gaza’s factions. The IDF is using that relative quiet to prepare new battle plans, in case Gaza “explodes” once again.

Unlike past escalations, particularly the 51-day “Operation Protective Edge” in 2014, which ended indecisively, the Israeli defense establishment is drawing up new battle plans designed to achieve the rapid destruction of enemy capabilities and a decisive victory that will spare the Israeli home front of weeks upon weeks of air-raid sirens and rocket attacks.

According to a recent report by Maariv military analyst Tal Lev Ram, the IDF has concluded that if it inflicts rapid and heavy damage on Hamas, it can force it into a truce arrangement from a weak position.

The IDF can achieve this objective through the use of more intense, accurate firepower, according to the report.

IDF Chief of Staff Lt. Gen. Aviv Kochavi has set an objective for the IDF’s Southern Command (which is responsible for Gaza), as well as for maneuvering divisions, the air force and the intelligence directorate: that is to kill 300 Hamas military operatives and other terror faction members during every 24 hours of combat, thereby disrupting the enemy’s plans and shortening the length of the combat.

Such plans rely on the military’s new ability to operate as a single combat network—one that instantly detects and shares enemy targets among forces on the military’s digital command networks, and acts on that intelligence in real-time, translating it into firepower strikes within seconds. This vision of future battle performance lies at the heart of the IDF’s Momentum multi-year program, drawn up by Kochavi and military brass.

It is about connecting an array of sensors to an array of shooters, whether on the ground, in the air or at sea.

This type of network-centered warfare is the key to understanding the IDF’s future battle plans.

But it’s not only about offense. In a detailed paper published in Bamahane, the IDF’s official magazine, the head of the Southern Command, Maj. Gen. Herzi Halevi (who is slated to become the next deputy chief of staff), stressed the need to think about defense—and not just the type provided by air-defense systems like Iron Dome.

Hamas’s elite unit, the Nahba Force, is planning offensive cross-border raids into Israel in the next war; those plans include killing and kidnapping raids against civilian communities and military targets in the vicinity of the Gaza Strip.

In the north, Hezbollah is planning similar types of ground raids to target Israel’s Galilee region.

“These are not maneuvers designed to hold territory for a long time, but rather, they are aimed at causing damage, taking hostages and more than that, create a consciousness effect among the Israeli public and to reverberate, via the media, that something has happened that has never happened before,” explained Halevi. “Terror’s goal is to frighten, not to win in the classic sense of the word. In this case, creating a lack of control over a state’s territory, sowing fear and instability—that is its achievement.”

In his paper, Halevi noted how American football teams are made up of players who are experts in offense, delivering the ball to the opponent’s end zone with players designated to defense in order to foil the opposing team’s offense.

“Our reality is immeasurably more complex; we play in defense and offense simultaneously, and we can’t swap the squads in every maneuver. The number of possibilities and tools in war is endless, and the price of a mistake influences the battle formations, as well as the public and the home front more than the impact of a painful loss in a decisive sports event,” he said. Nevertheless, continued Halevi, it is worth asking when it comes to modern warfare against terror armies if giving more attention to defense has become necessary.

While a quality military always prefers to attack, the importance of defense in both routine times and wars has become more important, he argued.

Israel’s adversaries today have access to high-tech combat capabilities that in the past were only available to advanced states. The cheap cost and easy availability of technology mean that enemies can create attack capabilities from the ground, in the air (projectiles and drones), at sea and underground, as well as cyber warfare.

Part of the answer to this new threat, argued Halevi, is to create a defense system that operates in the same domains that enemies operate in. Instead of looking at the old division of land, sea and air, it is now possible to divide them into sub-categories—above-ground and underground, high altitude and low altitude, sea surface and underwater, while adding the cyber domain.

An accurate defensive picture that can provide an early alert over enemy attacks in every domain is critical, said Halevi. This means being able to identify an attack in one of the domains, even if most of the attack occurs in another domain.

Quality intelligence that provides an ongoing picture of the enemy must include the ability to monitor all of the domains at the same time, according to Halevi’s new defense strategy.

“Every sign in one of the domains will [also] be examined in the other domains, and this significantly increases the chances of understanding the full picture and foiling [the enemy’s] maneuver,” he wrote. “Returning to the football team—while the coach knows the game schedule and when the decisive game will come, the game that the team must prepare for and arrive at its best—we must always be ready for the decisive game of our lives and assume that we will never know when it will occur.”