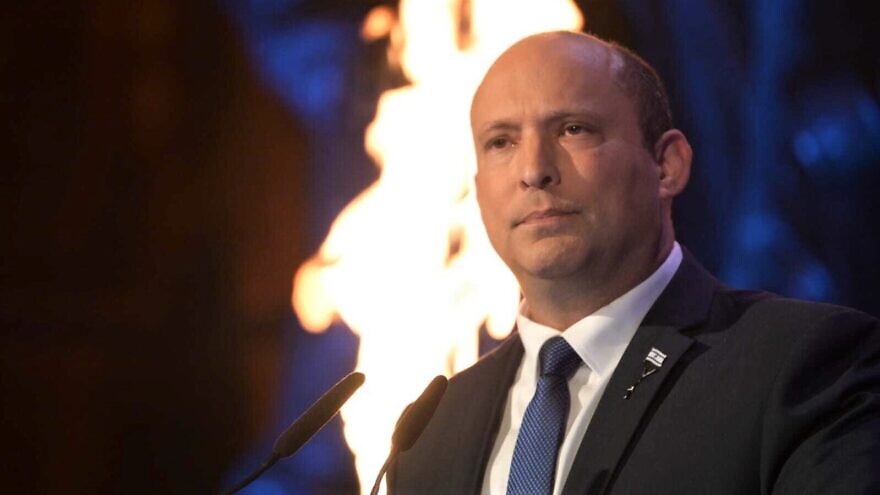 (April 27, 2022 / JNS) The modern-day State of Israel must not allow “the dangerous gene of factionalism” to dismantle it from within, Israeli Prime Minister Naftali Bennett said on Wednesday.

Speaking during a Holocaust Martyrs’ and Heroes’ Remembrance Day opening event at Yad Vashem in Jerusalem, the prime minister said: “The Warsaw Ghetto Uprising is rightfully considered to be the pinnacle of Jewish heroism—an impossible battle of a handful of Jews against many Germans. We all grew up on this legacy. Less talked about was the tragic fact that the two Jewish organizations that fought the Germans did so not as one body, but rather as two competing organizations that failed to cooperate amongst themselves. Those two organizations were the Jewish Military Union, which belonged to the right-wing revisionist movement, and the Jewish Fighting Organization, which belonged to the left-wing Socialist movement.”

“Yes. My brothers and sisters, even during the darkest chapter of Jewish history, during our people’s inferno of extermination, the left and the right did not find a way to work together,” he continued. “Each of these groups fought the Germans alone. I am trying to understand what ideological gap was so important that it was able to divide two Jewish organizations that were fighting such a desperate and heroic battle? What internal animosity justified such a division? My brothers and sisters, we cannot—we simply cannot—allow the same dangerous gene of factionalism to dismantle Israel from within.”

“Today, thank G-d, in the State of Israel, we have one army, one government, one Knesset and one nation—the people of Israel. When we are united, no external enemy can beat us,” stated Bennett.

Elsewhere in his remarks, Bennett pointed out that “the Holocaust is an unprecedented event in human history. I take the trouble to say this because as the years go by, there is more and more discourse in the world that compares other difficult events to the Holocaust. But no.

“Even the most difficult wars today are not the Holocaust and are not comparable to the Holocaust. No event in history, cruel as it may have been, is comparable to the Holocaust—the extermination of Europe’s Jews by the Nazis and their collaborators,” he said. “Unfortunately, history is full of cruel wars, brutal murders and also genocide. But it is usually a means designed to achieve a goal, some sort of expectation—military, political, economic, religious. The case of the extermination of the Jews is different.”

He continued: “Never, in any place or during any time, has one people acted to destroy another in such a planned, systematic and indifferent way, from a place of absolute ideology and not out of utilitarianism. The Nazis did not kill Jews to take their jobs or their homes. The Nazis sought to hunt all Jews and exterminate every last one of them.”