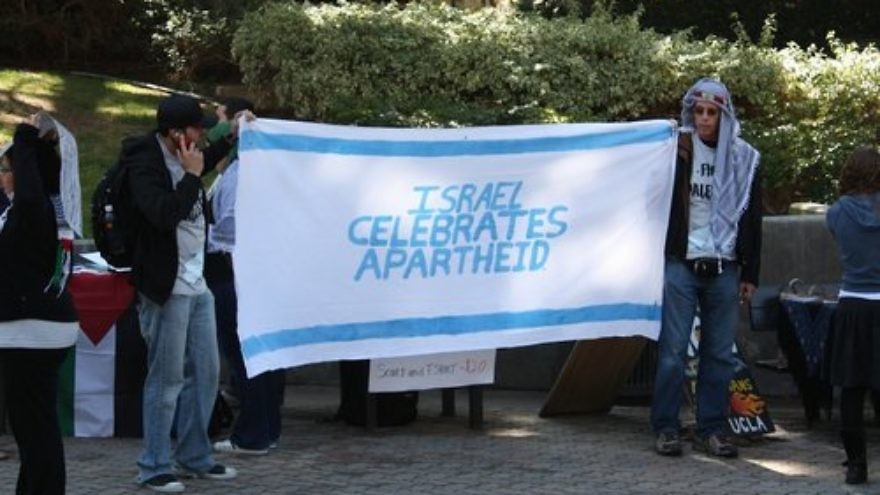 The cover page of the Committee for Accuracy in Middle East Reporting in America's (CAMERA) recently published monograph, “Indoctrinating Our Youth,” which describes how high schools in the Boston suburb of Newton have been using anti-Israel texts. Credit: CAMERA.
Republish this article
1379 WORDS
Spread the word.
Help JNS grow!
Share now:

WASHINGTON, DC—Anti-Israel bias in the textbooks used by many American high schools may be to blame for the decrease in sympathy for Israel among young adults.

According to the Brand Israel Group, only 54 percent of U.S. college students lean more toward Israel than the Palestinians, down from 73 percent in 2010. The decrease was even sharper among Jewish college students, dropping from 84 percent to 57 percent.

“The problem starts in high school,” Dr. Sandra Alfonsi, longtime director of Hadassah’s “Curriculum Watch” division, told JNS.org. “There’s no doubt the lack of sympathy for Israel on college campuses today is at least partly the result of several generations of teenagers being educated with textbooks that are slanted against Israel.”

One of the most controversial texts used in high schools around the country is the “Arab World Studies Notebook,” a 540-page volume authored by Audrey Parks Shabbas. She heads Arab World and Islamic Resources and School Services, a curriculum publisher that seeks to promote a positive image of Arabs and Muslims in U.S. schools.

After parents in Anchorage, Alaska, complained to their local board of education in 2004 about the book’s slant against Israel, the American Jewish Committee (AJC) prepared a 30-page analysis of the Notebook. The AJC found it to be riddled with “overt bias and unabashed propagandizing,” such as depicting Israel as the aggressor in every Arab-Israeli war and praising Muslim conquerors throughout the ages for their “gentle treatment of civilian populations.”

As a result, the Anchorage Board of Education removed the Notebook from the local high school curriculum. School authorities in Tulsa, Okla., have also withdrawn the text.

Shabbas has claimed the Notebook has been distributed to more than 10,000 teachers, and “if each notebook teaches 250 students a year over 10 years, then you’ve reached 25 million students.”

“The most important statistic is the number of workshops that Shabbas has given to instruct teachers in how to use the book,” Curriculum Watch’s Alfonsi said. “She has conducted hundreds of such three-day teacher-training sessions.” Shabbas’s website names 211 schools where she ran teacher workshops from 2000-2006. Other years are not listed.

Shabbas did not respond to requests for comment from JNS.org.

The Committee for Accuracy in Middle East Reporting in America (CAMERA) recently published a 108-page monograph, “Indoctrinating Our Youth,” which describes how high schools in the Boston suburb of Newton have been using biased texts such as the Arab World Studies Notebook and inviting anti-Israel speakers to address their students.

The controversy began in 2011, when a Newton South High School parent complained about a passage from the Notebook accusing Israel of torturing and murdering hundreds of Palestinian women. Other parents soon joined the protests. Matt Hills, vice chair of the Newton School Committee, dismissed the critics as “McCarthyesque.”

In early 2012, Newton Superintendent of Schools David Fleishman said the Notebook had been removed from the curriculum because it was “outdated.” But an investigation by Americans for Peace and Tolerance (APT), a Boston-based activist group, found that the Notebook was still being used in Newton as late as the 2013-2014 school year.

The dispute has been complicated by the refusal of Newton school authorities to identify which Israel-related materials were being used by teachers. Many school districts around the country list their curriculum materials on their websites. APT President Charles Jacobs told JNS.org his group “will continue to build support for a policy of transparency, so that parents and citizens can know what is being taught to Newton’s students.”

In response to a request for copies of the materials, Joel Stembridge, principal of Newton South High School, said the requester would need to pay $3,643 to cover photocopying expenses. Eventually, Freedom of Information Act requests were filed by Judicial Watch and others, including JNS.org and APT. Judicial Watch’s request forced the release of nearly 500 pages of material.

Newton Mayor Setti Warren, a member of the nine-person School Committee, attended committee meetings on the textbooks issue but did not actively participate in the discussions, according to community members. The mayor, who is now a candidate for the Democratic nomination for Massachusetts governor, did not respond to requests for comment from JNS.org.

Several mainstream Jewish organizations in Boston, including the local chapter of the Anti-Defamation League, initially denied that biased materials were being used in the schools. They also criticized APT for organizing protests against the Newton school authorities. Later, the New England ADL changed its position, agreeing that the Arab World Studies Notebook and another anti-Israel text, “A Muslim Primer,” should not have been used in schools.

The CAMERA monograph reports that as a result of the controversy, “there has been some change in the selection of materials” by Newton officials and “more careful vetting of them.” Yet some of the supplemental materials that Newton teachers use “continue to favor fringe perspectives,” according to the study.

Steven Stotsky, the monograph’s author, told JNS.org the situation “remains unresolved,” pointing out that Newton North High School hosted another anti-Israel speaker in June. Since no curriculum materials have been shown to the parents since 2015, “we don’t know” if any of the anti-Israel books are still being used, Stotsky said.

Controversies around the country

Other texts have been at the center of similar controversies elsewhere around the U.S. in recent years.

Parents in Tennessee’s Williamson County complained to school authorities in 2013 over a textbook called “The Cultural Landscape: An Introduction to Human Geography.” In a section on the reasons for the rise of terrorism, the book asks: “If a Palestinian suicide bomber kills several dozen Israeli teenagers in a Jerusalem restaurant, is that an act of terrorism or wartime retaliation against Israeli government policies and army actions?”

The protests, which were led by Christian pro-Israel activist Laurie Cardoza-Moore and supported by the Jewish Federation of Nashville, prompted the Tennessee state legislature to take steps to ensure greater parental involvement in the selection of textbooks.

Further, the book’s publisher, Pearson Education, removed the suicide bomber passage from subsequent editions. But Cardoza-Moore told JNS.org her campaign was “only a partial victory, because ‘The Cultural Landscape’ contains other biased statements about Israel that were not removed.”

In Georgia’s Sumter County, Campbell Middle School parent Hal Medlin complained in 2011 about a class assignment featuring a fictitious letter from a Saudi woman who defended Islamic sharia law and her husband’s polygamy, on the grounds that she was being “cared for” by her husband. Conservative activist Pamela Geller, who joined the protests against the Campbell Middle School assignment, told JNS.org the letter was “an outrageous whitewash of the subjugation of women by Islam.”

The curriculum unit also included a document in which a pro-Palestinian activist suggested terrorist attacks against Israeli Jews are “understandable.”

In neighboring Henry County, school authorities responded to complaints about the text by withdrawing it from the curriculum. Sumter County officials took no such action, but Sharon Coletti—president of the InspirEd curriculum developer, which had prepared the controversial materials for Georgia public schools—told JNS.org that “the topics of women’s rights and the West Bank have largely been dropped [from statewide curricula], so we removed” the texts.

Parents at a high school in Pittsburgh complained to Curriculum Watch’s Alfonsi in 2007 about a teacher’s use of “Habibi,” a young adult novel by Naomi Shihab Nye. Alfonsi found that the book has a “strongly pro-Palestinian slant, including extreme accusations about ‘Israeli oppression.’” The fact that it was being used in an Advancement Placement English class “meant that it was indoctrinating some of the brightest kids in the school,” she said. As a result of Alfonsi’s discussions with school officials, “Habibi” was dropped from the class’s curriculum.

“The problem is that for every school that removes an anti-Israel text, there are a hundred more that are continuing to use it,” Alfonsi said, adding, “When I began this work 20 years ago, we were reviewing curriculum materials used for the 6th to 12th grades. Now we are seeing anti-Israel in bias in texts going all the way down to the 4th grade. I’m concerned that many in the Jewish community still do not recognize how serious this problem is.”