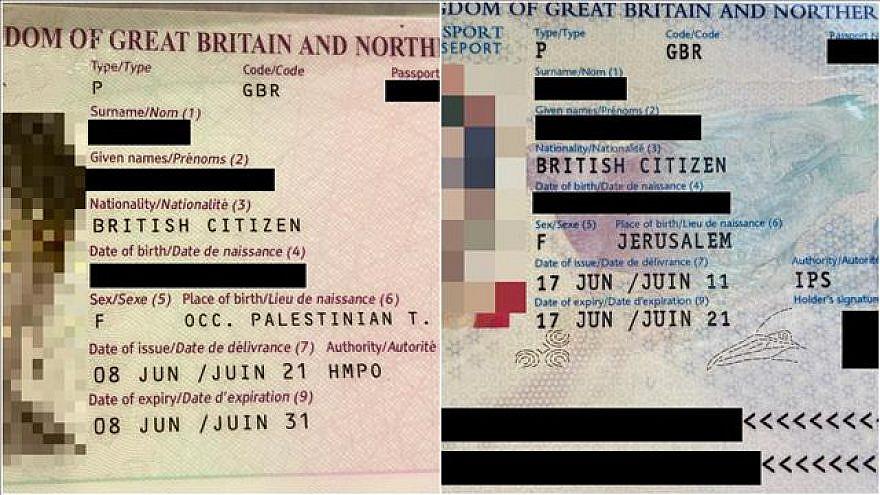 Ayelet Balaban's old and new British passports. Upon renewing the document, Balaban, who holds dual citizenship, was surprised to discover that her place of birth had been changed, from "Jerusalem" to "Occupied Palestinian Territories." Photo by Ayelet Balaban.
Spread the word.
Help JNS grow!
Share now:

(June 16, 2021 / JNS) Israel’s Foreign Ministry is investigating a report that an Israeli woman had her birthplace changed from “Jerusalem” to “Occupied Palestinian Territories” upon renewing her U.K. passport.

Ayelet Balaban, a dual Israeli-British citizen who has held a U.K. passport all her life, said she was shocked upon receiving the new document, according to Israel’s Kan.

According to Balaban, she sent her old passport to England about two weeks ago and received the new one on Monday. Upon discovering the change, Balaban checked with her brother, who renewed his British passport two years ago and which still listed “Jerusalem” as his place of birth.

Her brother, who works at Nefesh B’Nefesh, an organization helping Jews from English-speaking countries immigrate to Israel, said it’s the first time the organization has encountered the change, according to the report.

Balaban sent a letter to Israel’s Ambassador to the United Kingdom, Tzipi Hotovely, on Tuesday but said she hasn’t yet heard back.

Inquiries have also been sent to the British Embassy in Israel.