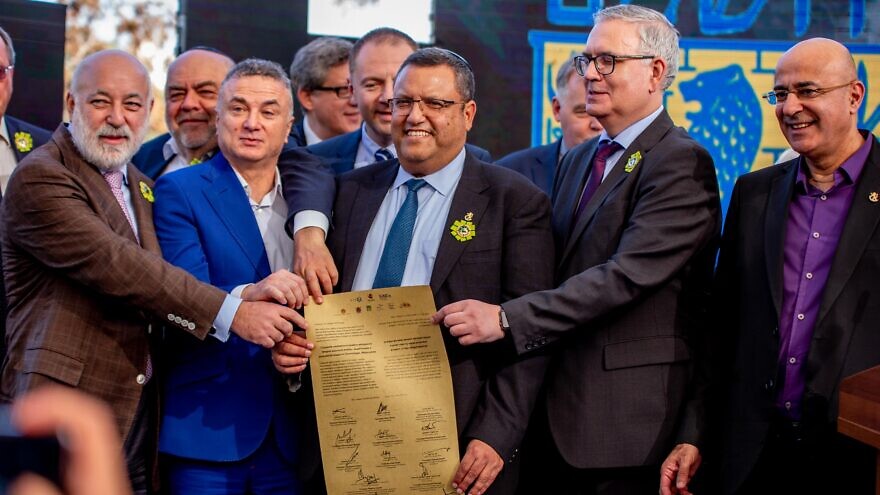 Israeli and Russian leaders attend the cornerstone-laying ceremony in Jerusalem of the Memorial Candle Monument, dedicated to defenders and residents of Leningrad during the German siege on the city during WWII, Nov. 12, 2019. Photo by Elisha Henkin.
Spread the word.
Help JNS grow!
Share now:

(November 13, 2019 / JNS) The cornerstone of a monument commemorating the World War II Siege of Leningrad was laid in a ceremony in Jerusalem on Tuesday.

“For many years, I lived in St. Petersburg [formerly Leningrad], and know firsthand what a deep scar the siege has left in the life of every Leningrad resident,” said EAJC President Mirilashvili.

“The Memorial Candle monument in Jerusalem not only appeals to our shared memory,” he said, “but serves as a reminder that the world remains a precarious place. It is up to us to uphold the truth and preserve the memory of the terrible war so that the tragedy of our peoples never repeats.”

Businessman Vekselberg said that “time erases many things, especially painful memories of past tragedies. This is simply our coping mechanism.”

However, he added, “we cannot let ourselves forget about such horrific events … as the Siege of Leningrad. Our shared task is to remind present and future generations about the heroism of the people of Leningrad, and about the trials and tribulations they had to endure during those endless 900 days and nights.”

The project was introduced by Russian and Israeli leaders in January 2017 at an event in Moscow dedicated to International Holocaust Remembrance Day, and was undertaken with the support of the authorities in St. Petersburg and Jerusalem.

The opening of the steel stele bearing the symbols of Israel and St. Petersburg is slated to take place in January 2020 as part of the celebration of Leningrad Liberation Day and Holocaust Remembrance Day, both of which fall on Jan. 27.