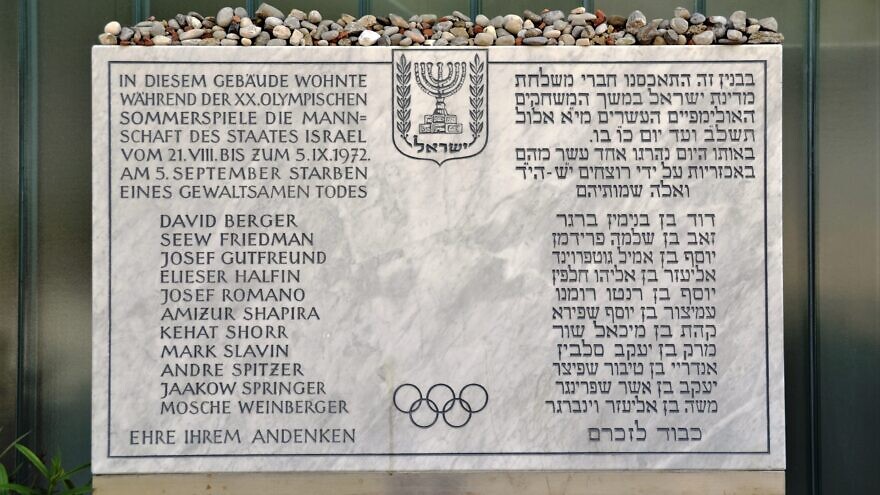 A plaque in front of the Israeli athletes' quarters commemorating the victims of the 1972 Munich Olympics massacre reads, in German and Hebrew: “The team of the State of Israel lived in this building during the 20th Olympic Summer Games from 21 August to 5 September 1972. On 5 September, [list of victims] died a violent death. Honor to their memory.” Credit: Wikimedia Commons.
Spread the word.
Help JNS grow!
Share now:

(August 31, 2022 / JNS) The families of the Israeli athletes murdered during the 1972 Munich Olympics have reached an agreement with the German government regarding compensation for what the families claim was Germany’s mishandling of the terror attack and its aftermath, Israeli media reported on Wednesday.

As a result, they have agreed to attend an upcoming event in Germany marking 50 years since the tragedy, after threatening to boycott it over the dispute with Germany over the matter, according to Ynet.

German media reported on Tuesday that the figure offered to the families totaled €28 million ($28 million). According to a report by Deutsche Welle, Germany’s previous offer to the victims’ families was for an additional €5.4 million ($5.39 million) total, on top of the €4.6 million already paid.

However, the families sought a higher figure: €9 million per victim. The sum was symbolic, according to the report; Abu Daoud, the terrorist mastermind behind the attack, claimed in his autobiography that Germany had offered his terror group, Black September, $9 million (€9.01 million) to hijack a Lufthansa plane and demand the Munich terrorists’ release.

The improved offer, which came after intensive negotiations, is much closer to the families’ demand.

The German government convened a special cabinet meeting on Tuesday to discuss the issue, as well as other pressing issues such as the country’s impending energy crisis and the conflict in Ukraine, according to the Ynet report. A high-level German official present at the meeting reportedly stated that the discussions regarding the issue were of the utmost significance to the German government.

In the early morning hours of Sept. 5, 1972, members of the Israeli Olympic team were kidnapped in the athletes’ village by members of Black September. After a standoff and subsequent botched rescue effort, 11 Israelis, five Palestinian kidnappers, and a German policeman had been killed.

The kidnapping of the hostages and their subsequent deaths shocked the world and infuriated Israel. The games were allowed to resume after a brief 34-hour pause, a decision that was severely condemned at the time and subsequently.

The families of the 11 Israeli victims blame the German authorities for their handling of the attack and its aftermath.