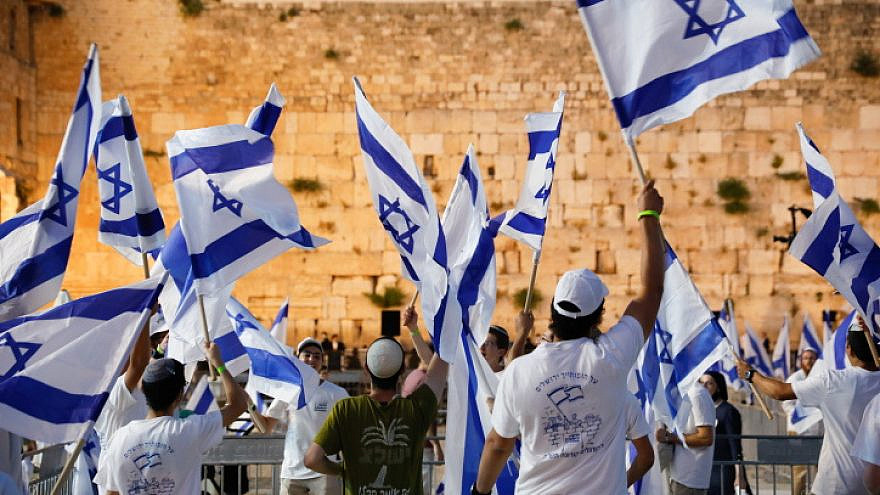 Jews celebrate Jerusalem Day at the Western Wall in the Old City on May 21, 2020. Photo by Olivier Fitoussi/Flash90.
Spread the word.
Help JNS grow!
Share now:

(June 14, 2021 / JNS) Hamas on Sunday threatened to take military action if the Jerusalem flag march goes ahead on Tuesday as planned, Israel’s Channel 12 reported on Monday.

Citing the Lebanese daily Al-Akhbar, the report said that Hamas conveyed a warning to Israel through Egyptian and United Nations mediators that if the event was not canceled, the Palestinian “resistance” would take actions similar to those it took in May, during “Operation Guardian of the Walls,” when more than 4,000 rockets were fired from Gaza at Israeli population centers.

“Instructions were issued to the missile units to prepare,” Hamas reportedly announced, while also calling on all Palestinian factions to hold a “Day of Rage” in “all parts of historic Palestine” on Tuesday, with an emphasis on the Old City of Jerusalem, to “protect” the Al-Aqsa mosque and prevent Jews from entering the Temple Mount complex.

The original flag march—an annual tradition on Jerusalem Day, which marks the unification of the city after the 1967 Six-Day War—was supposed to take place this year on May 10. It was halted, however, by a rocket barrage from Gaza on Jerusalem, already in the throes of violent Arab rioting. It was this rocket fire that sparked the 11-day “Operation Guardian of the Walls.”

The march was then rescheduled for June 10 but was nixed when the Israel Police withdrew its permit, citing safety concerns.