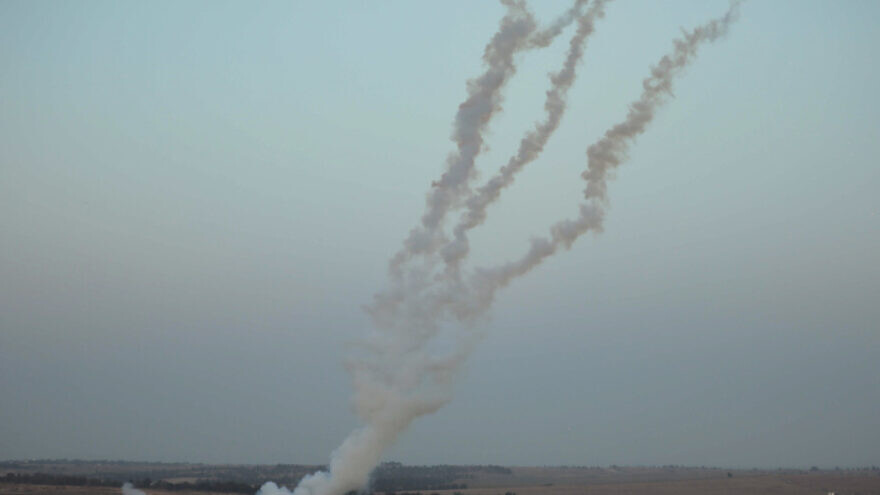 Rockets being launched from the Gaza Strip into Israel on May 4, 2019. Photo by Hassan Jedi/Flash90.
Spread the word.
Help JNS grow!
Share now:

The barrages continued on Monday morning with three rockets fired at southern Israel, two of which failed to cross the border—exploding in Gaza—and the third of which was intercepted by the Iron Dome air-defense system.

The incident came on the heels of an IAF strike on a Hamas military post in southern Gaza on Sunday morning, which in turn came in response to a rocket fired into Israel from the Strip on Saturday night.

The rocket fire followed a series of incendiary balloon attacks from Gaza that set fields in southern Israel ablaze. Palestinians in Gaza resumed the balloon attacks on Monday morning. One of the balloons, which landed in a field in the community of Dorot in the Sha’ar HaNegev region, was suspected to be equipped with a bomb. Police sappers were called to the scene to remove the device, said a Sha’ar HaNegev spokesperson.

The above events coincide with a month-long Israeli war exercise that began on Sunday to simulate a multi-front conflict. The exercise, dubbed “Chariots of Fire,” will see the IDF test its responses to combat scenarios in northern and southern Israel, as well as in Judea and Samaria.