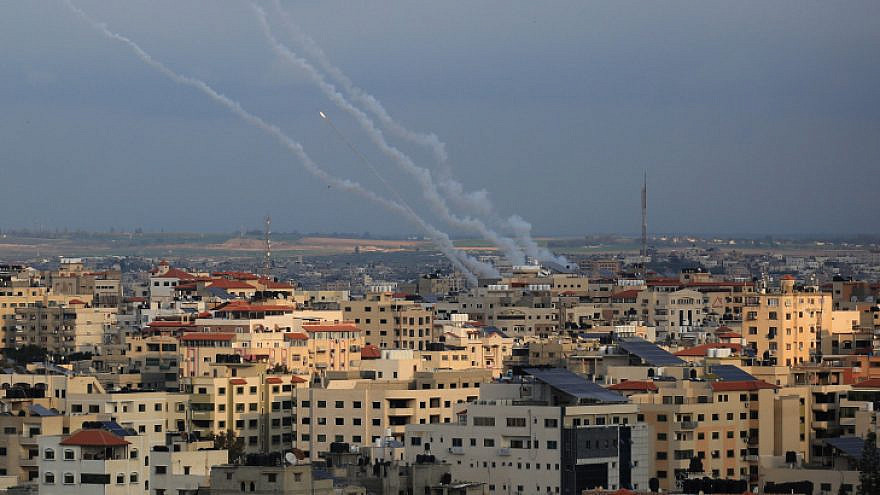 (May 10, 2021 / JNS) Hamas and other Palestinian terror groups have launched at least seven rockets towards Jerusalem on Monday evening in a significant escalation of ongoing tensions in the Israeli capital over the last several days.

According to the Israel Defense Forces, Palestinian terrorists fired seven rockets towards Jerusalem, with one of the projectiles intercepted by Israeli air defenses and the others landing in open areas.

Videos out of Jerusalem show Israeli civilians running for cover amid air sirens. Many Israelis had been out in the city to mark Jerusalem Day, which commemorates the unification of the capitol by Israeli forces during the 1967 Six-Day War.

Israel’s Knesset, which was in session during the rocket fire, was also evacuated.

This is the first time that Jerusalem has been targeted with rocket fire from Gaza since “Operation Protective Edge” in the summer of 2014.

Gaza terrorists also launched a barrage of rockets at communities in southern Israel. To date, there have not been reports of injuries or damage.

Additionally, an Israeli man was injured by anti-tank fire aimed at his car near the Gaza border region, the IDF said.

Earlier, Hamas had issued an ultimatum that Israel withdraws its forces from the Al-Aqsa Mosque and Sheikh Jarrah neighborhood by 6 p.m. local time or that it would respond.

On Monday, some 305 Palestinian rioters had been injured in clashes with Israeli police, including 228 who went to nearby hospitals or clinics for treatment, reported the Associated Press. At least 21 Israeli police officers have been hurt, including three who were hospitalized. Seven Israeli civilians have also been injured. Israeli police said rioters have been hurling rocks and other objects, and launching fireworks from the Temple Mount and Al-Aqsa Mosque, leading them to enter the compound.