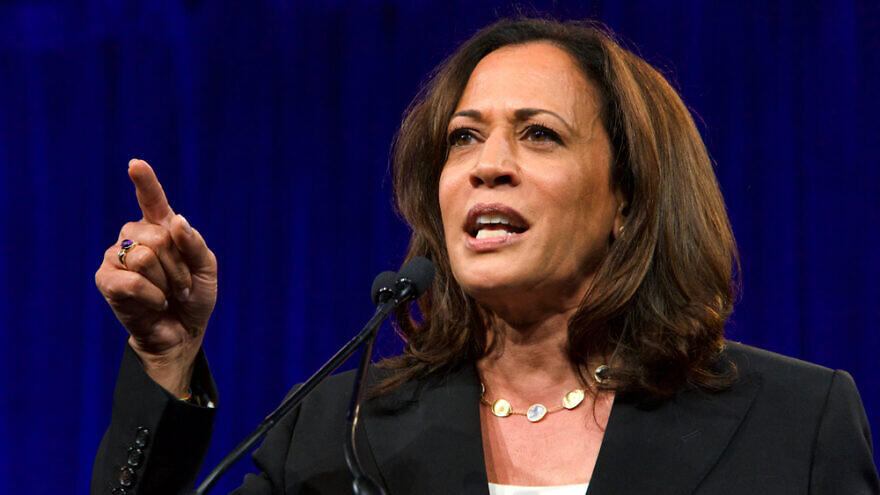 (October 1, 2021 / JNS) U.S. Vice President Kamala Harris has been in touch with pro-Israel and Jewish organizations after an exchange this week with a student in Virginia who accused Israel of ethnic genocide.

Sanders said that “throughout her career, the vice president has been unwavering in her commitment to Israel and to Israel’s security. While visiting George Mason University to discuss voting rights, a student voiced a personal opinion during a political science class.”

Harris’s exchange with the student took place on Tuesday at George Mason University in Fairfax, Va. In a video of the event, Harris is seen nodding as the female student lambasted the United States for its support of its allies in the Middle East.

“I see that over the summer, there have been, like, protests and demonstrations in astronomical numbers,” said the student, who identified herself as half-Iranian, half-Yemeni, referring to Palestinian protests during Israel’s 11-day conflict with the Hamas terrorist organization in Gaza in May.

“Just a few days ago, there were funds allocated to continue backing Israel, which hurts my heart because it’s ethnic genocide and the displacement of people—the same that happened in America, and I’m sure you’re aware of this,” the student continued, referring to the special budget passed by the U.S. House of Representatives to support Israel’s Iron Dome missile-defense system, blaming this and other such measures for “inflaming Israel and backing Saudi Arabia and what-not.”

Harris did not directly address the above accusations but said she was “glad” that the student wasn’t afraid to come forward with her grievances.

“This is about the fact that your voice, your perspective, your experience, your truth, should not be suppressed, and it must be heard, right? And one of the things we’re fighting for in a democracy, right?” she said.

Harris received backlash on social media, with the Republican National Committee posting an excerpt of the exchange.

“Kamala Harris supports a student who accuses Israel of ethnic genocide—there goes Kamala doing what she does best—supporting terrorists and insulting allies,” one critic tweeted.

Following the controversy, Harris and her aides were in touch with several pro-Israel organizations, who backed up her support for Israel.

According to CNN, Harris’s deputy national security adviser, Phil Gordon, and her deputy communications director, Herbie Ziskend, led the outreach and tried to clarify that her silence did not equate any agreement with the student’s claims of ethnic genocide.

“There’s a recognition that the impression left by her failure to correct the student is problematic and does not reflect her commitment to a strong U.S.-Israel relationship, nor that of the president and the administration,” William Daroff, CEO of the Conference of Presidents of Major American Jewish Organizations, told CNN.

“The Biden-Harris administration, as well as [U.S.] President [Joe] Biden and Vice President Harris personally, have exemplary pro-Israel records, for which we are immensely grateful,” said Democratic Majority for Israel President Mark Mellman in a statement.

“We were pleased Vice President Harris’s senior staff reached out to us today to confirm what we already knew: Her ‘commitment to Israel’s security is unwavering,’ and she ‘strongly disagrees with the George Mason student’s characterization of Israel.’ ”

Similarly, ADL national director and CEO Jonathan Greenblatt wrote on Twitter: “Just spoke with @VP office. Glad to hear her confirm she is proud of her record supporting #Israel, and knows claim it is committing ‘ethnic genocide’ is patently false. Looking fwd to a clearing of the record so there’s no ambiguity that what that student said was hateful/wrong.”