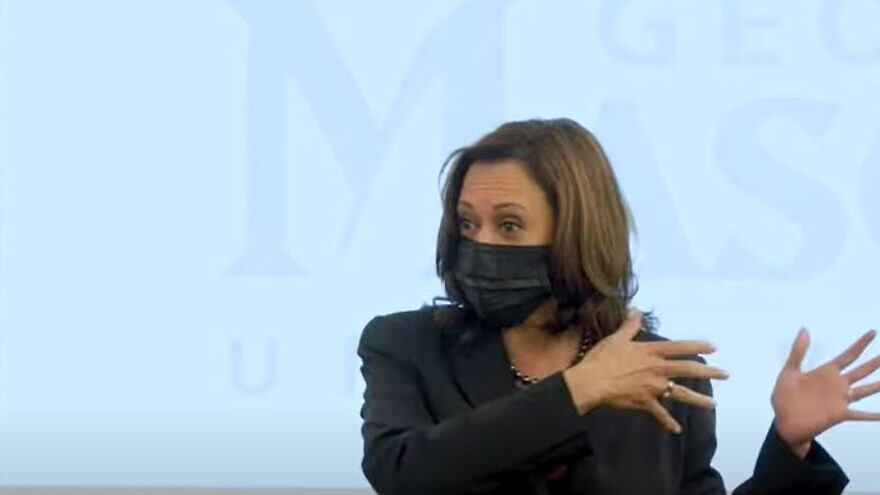 (September 30, 2021 / Israel Hayom) U.S. Vice President Kamala Harris has come under fire for not condemning a student who accused the government of facilitating the “ethnic genocide” of Palestinians.

Harris’s exchange with the student took place on Tuesday at George Mason University in Fairfax, Va. In a video of the event, Harris is seen nodding as the female student lambasted the U.S. for its support of its allies in the Middle East.

“I see that over the summer there have been, like, protests and demonstrations in astronomical numbers,” said the student, who identified herself as half-Iranian, half-Yemeni, referring to Palestinian protests during Israel’s 11-day conflict with the Hamas terrorist organization in Gaza in May.

“Just a few days ago, there were funds allocated to continue backing Israel, which hurts my heart because it’s ethnic genocide and displacement of people—the same that happened in America, and I’m sure you’re aware of this,” the student continued, referring to the special budget passed by the U.S. House of Representatives to support Israel’s Iron Dome missile-defense system, blaming this and other such measures for “inflaming Israel and backing Saudi Arabia and what-not.”

Harris did not directly address the above accusations but said she was “glad” that the student wasn’t afraid to come forward with her grievances.

“This is about the fact that your voice, your perspective, your experience, your truth, should not be suppressed, and it must be heard, right? And one of the things we’re fighting for in a democracy, right?” she said.

“Our goal should be unity, but not uniformity, right?” continued the vice president. “Unity should never be at the expense of telling anyone personally that, for the sake of unity, ‘Oh, you be quiet about that thing; you suppress that thing. Let’s not deal with that thing.’ That’s not unity. True unity is everyone in that room has a voice.”

Harris then reiterated that pluralism should be cherished, though didn’t dispute accusations of genocide.

“The point that you are making about policy that relates to Middle East policy, foreign policy: We still have healthy debates in our country about what is the right path, and nobody’s voice should be suppressed on that,” she said.

Harris’s nodding gestures and decision to let the anti-Israel comments on genocide go unopposed led to an online backlash.

“Kamala Harris supports a student who accuses Israel of ethnic genocide—there goes Kamala doing what she does best—supporting terrorists and insulting allies,” one critic tweeted.