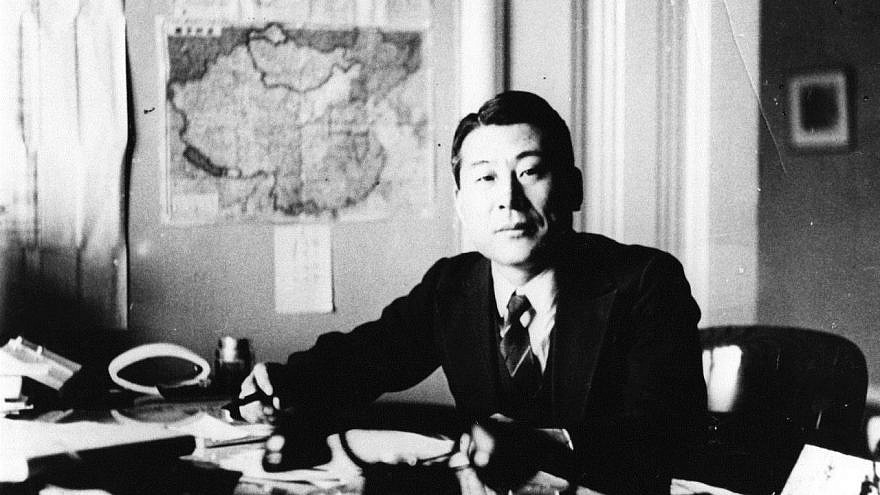 (January 26, 2021 / JNS) Ahead of International Holocaust Remembrance Day on Jan. 27, a virtual event on Monday honored a hero often referred to as the “Japanese Schindler” for helping to save thousands of Jews from the Holocaust.

Chiune Sugihara, a Japanese diplomat stationed in Lithuania, defied his own government’s orders by issuing handwritten transit visas in 1940 to more than 6,000 Lithuanian Jews, enabling them to escape Nazi-occupied Europe. He continued to do so for a month until the Japanese consulate was closed. More than 40,000 descendants of those Jews are believed to be alive today because of his courageous actions.

The online event highlighted Sugihara’s heroic deeds and the lessons we can learn from him in battling contemporary anti-Semitism. The reception was hosted by the Combat Anti-Semitism Movement and B’nai B’rith International.

Sacha Roytman Dratwa, executive director of the Combat Anti-Semitism Movement, told JNS, “While Sugihara has gotten more attention in recent decades, particularly after Yad Vashem gave him the ‘Righteous Among the Nations’ title in the 1980s, most people, including Jews, are still unaware of his heroic deeds. So, it is important that we honor those, such as Sugihara, who came to the aid of the Jewish people in the darkest hour of their history.”

“With fewer and fewer survivors of the Holocaust alive to tell their stories, it is vital that its lessons continue to be shared,” he continued. “The Sugihara lesson is about what one person can do in the face of evil—which, with anti-Semitism on the rise around the world, is as relevant as ever.”

The well-known attorney Nathan Lewin, 84, recalled his family’s personal story of how they were saved by Sugihara. He was born in Lodz, Poland, and in September 1939, when Adolf Hitler invaded, he and his family, including his maternal grandmother and uncle, smuggled across the border and made their way to Vilnius, Lithuania. Lewin was 3 years old at the time. 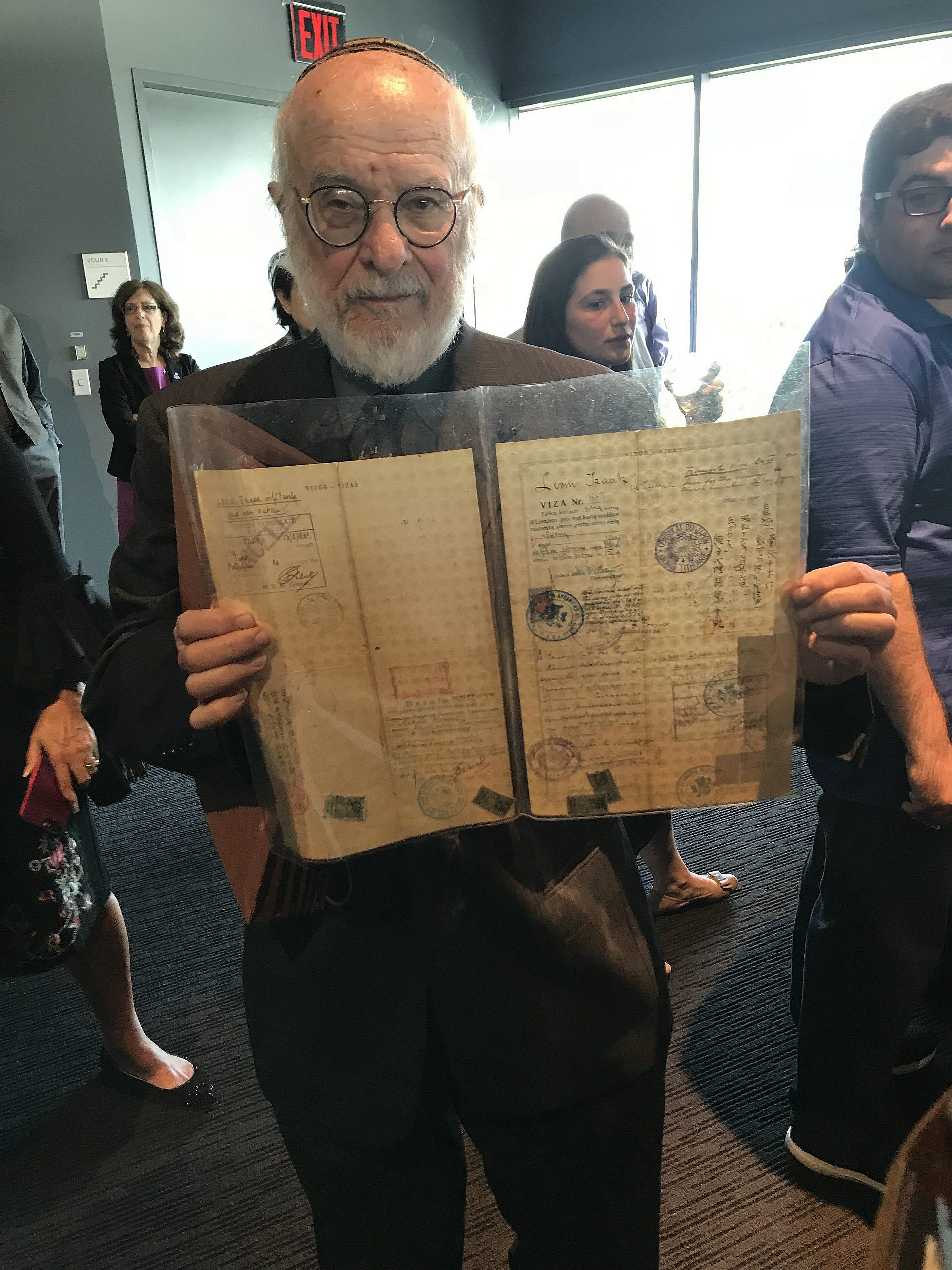 Nathan Lewin, 85, holding the original transit visas issued to him and his parents by Chiune Sugihara. Photo by Shiryn Ghermezian.

They hoped to travel even farther away from Hitler’s grasps but were unable to get travel documents. Lewin’s mother then went to Sugihara at the Japanese consulate and received the first handwritten “Sugihara visa” given to Jews. Sugihara’s transit visa allowed Lewin’s entire family to travel to Curaçao and Suriname via Japan.

Lewin and his family did not go to Suriname or Curaçao but instead traveled to Japan. They came to the United States as refugees when he was 5.

He said at the event, “It is both an honor and a blessing for me to be here today to share my admiration and thanks for an individual who embodied the role that our rabbis specified, saying you should not do a good deed with the expectation that you will be rewarded, but for the good deed itself. That is what Chiune Sugihara did.”

Lewin told JNS, “It’s necessary and important to honor those people who took personal efforts and really jeopardized their own professional status to help people who were fleeing from the Holocaust. And Mr. Sugihara did just that.” 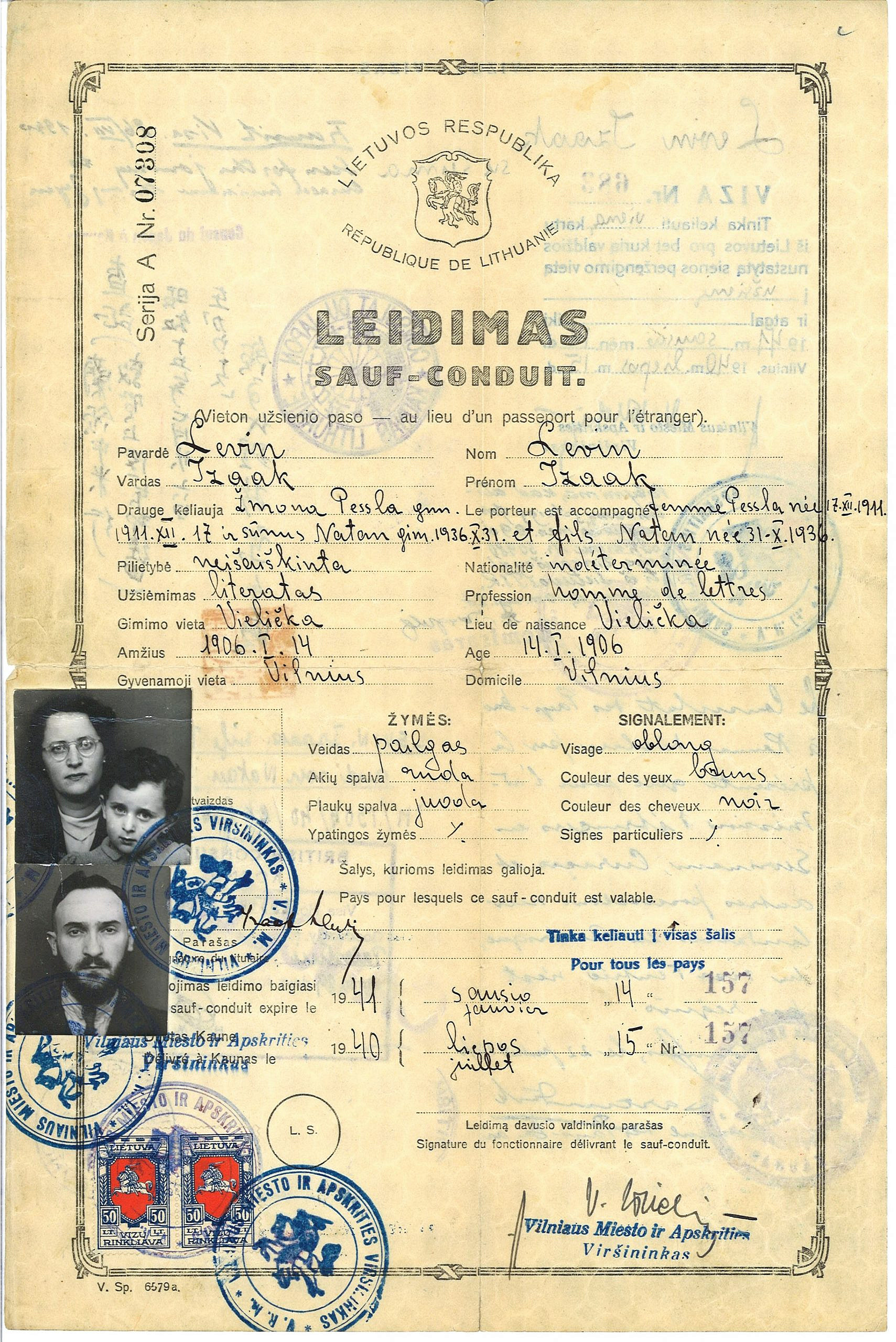 The transit papers that were issued to Nathan Lewin and his parents. Credit: Courtesy.

‘He gave them hope and life’

President of the Louis D. Brandeis Center for Human Rights Under Law, she told JNS: “The lesson we learn from Chiune Sugihara is that we must recognize that even if we come from different backgrounds, different faiths, different cultures, different races, different genders, different ethnicities, we are all human beings deserving of respect and fairness, entitled to life, liberty and the pursuit of happiness.”

She further praised Sugihara, saying “at a time when Jews were being stigmatized and marginalized, he treated them as human beings. He gave them hope and life when others sought to rob them of their dignity.”

She added that Jews are again being stigmatized and marginalized today, but this time because of their ethnicity. 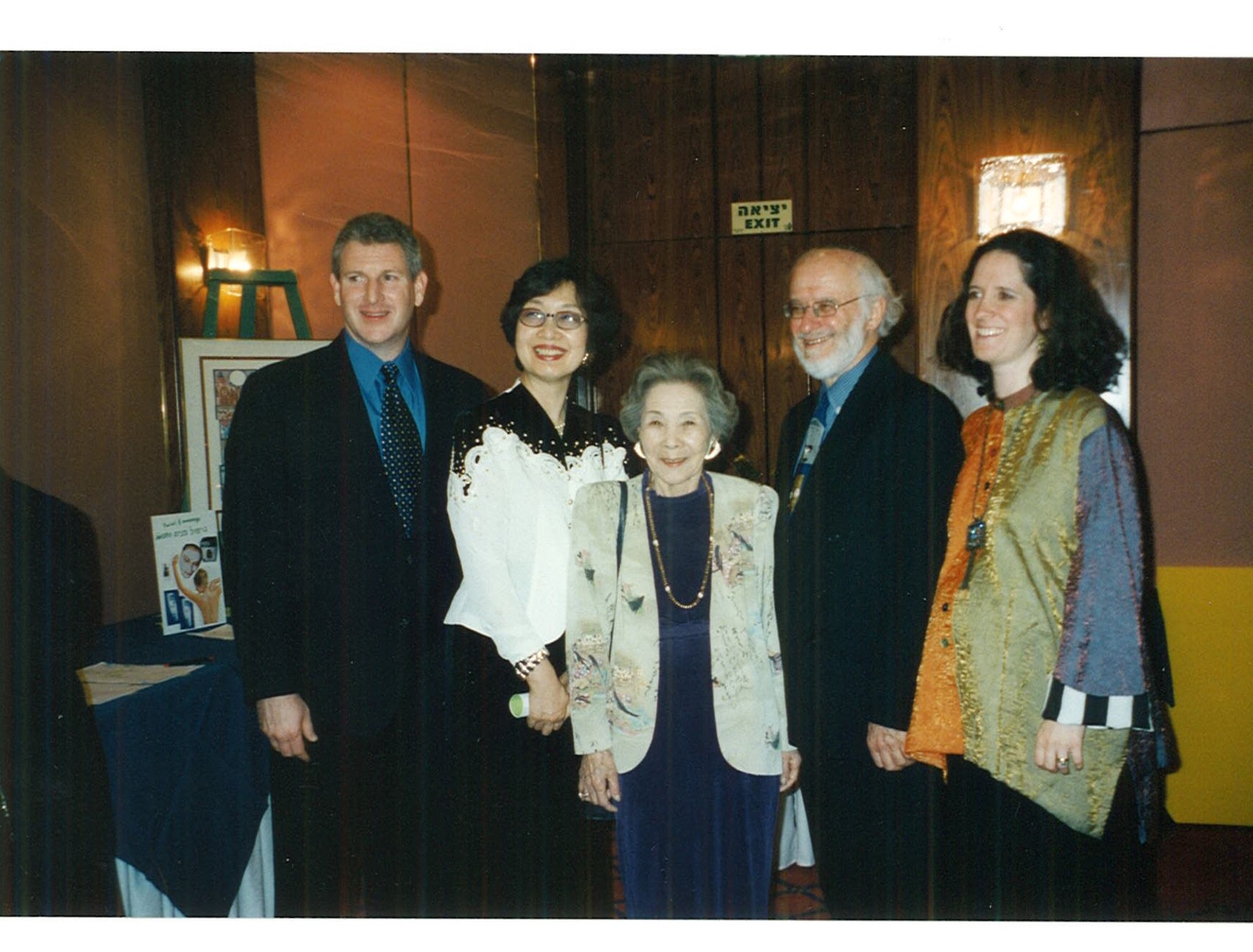 A photo with Chiune’s wife, Yukiko Sugihara, in 2000. On the right is Nathan Lewin and his daughter, Alyza. Credit: Courtesy.

“Jews who take pride in our sense of Jewish peoplehood—and in the Jews’ deep, religious, ethnic, cultural and ancestral connection to the Land of Israel—are being pressured to shed that ethnic pride,” she said. “The Jewish homeland, the Jewish nation-state of Israel—where all races, religions, ethnicities and genders are equal under the law—is the only nation-state today that is targeted as illegitimate.

“It is the only country that some say has no right to exist. This is today’s contemporary form of anti-Semitism, and we must unite to combat it. Because anti-Semitism is not just a Jewish problem. It is a cancer that rots away at and ultimately destroys societies that fail to curb it.”

Another Holocaust survivor, Ada Winsten, whose family also obtained transit visas from Sugihara, paid tribute to the man she called “the Japanese Schindler.” She noted that “if not for him, I would not be here. I would not have my children [or] my grandchildren. If not for Sugihara, we would not even have this story to tell.”

The event’s keynote speaker was Ambassador Kanji Yamanouchi, Consul General of Japan in New York, who said that “by the grace of Sugihara’s pen, thousands of lives were saved.”

“We must remember the Holocaust to honor those who perished and to achieve a better society,” he continued. “We know that no country is immune from the forces of racism and fascism. So, we have to do the right thing when necessary. Chiune Sugihara is one of those who did the right thing in the most difficult hour.”