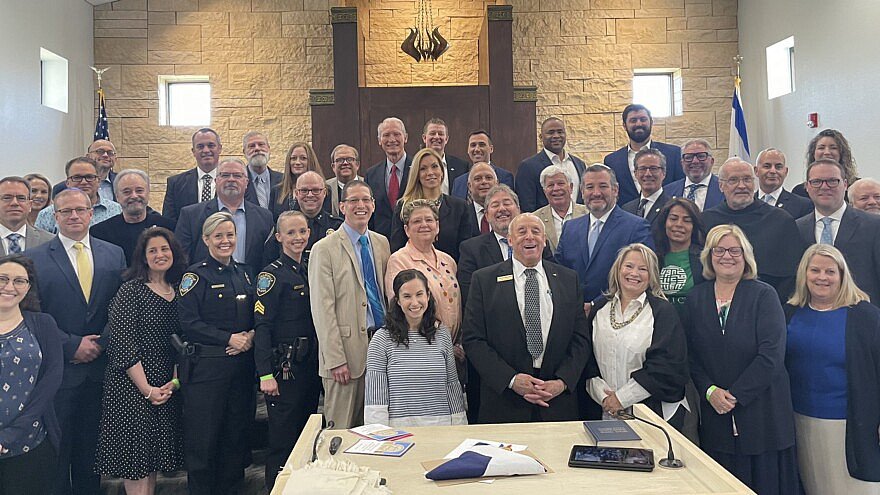 (January 23, 2023 / JNS) Recounting his experiences on Jan. 15, 2022, when an ordinary Shabbat service turned into an 11-hour hostage situation at Congregation Beth Israel in Colleyville, Texas, Jeff Cohen said it was ongoing training that helped him and the others at the synagogue that day know what do to.

“Our survival was not a miracle, and it’s a little frustrating when people say that,” said Cohen, who now serves as the synagogue president. “Our escape was due to training, planning and actually executing some of the things we had prepared for.”

He spoke during a 90-minute webinar on surviving hostage situations, which was offered by the Secure Community Network in collaboration with Jewish Federations of North America and the Conference of Presidents of Major American Jewish Organizations.

Leading the discussion of just what to do should you find yourself in such a situation were Shawn Brokos, director of community security at the Jewish Federation of Greater Pittsburgh, and Beth LaManna, regional security adviser for Jewish Nevada. Both women are certified crisis negotiators and former FBI agents who have worked in actual hostage situations.

LaManna noted that surviving isn’t just about being physically safe it’s about hostages being able to “return [to] their best and most productive lives.”

There are two types of hostage situations, according to LaManna. First, there is a “non-hostage crisis,” in which the hostage-taker has a relationship of some kind with the person he has taken hostage such as in a workplace incident or domestic situation.

Second, and much rarer, is a true hostage situation such as that which occurred at Beth Israel. Such attacks, said LaManna, are “goal-oriented”; the hostage-taker wants something from law enforcement and uses the hostages to try to get it.

Brokos explained that there are three unique phases of a hostage situation: the initial phase, middle phase and resolution phase. Each one, she said, comes with unique fears and concerns.

During the initial phase, which can run up to 45 minutes after an incident begins, there is a great deal of “panic and confusion for everyone.” It is important at this time to stay calm, which, Brokos said, sounds simple but is easier said than done. “We recommend slow and deep breathing,” as that can help you think rationally and lead to better decision-making.

“Calm is contagious,” she said.

At this point it is important to recognize that the hostage-taker is in control. Don’t threaten or challenge him, said Brokos. “Don’t act belligerent…don’t stand out. Be vanilla and meld into the background.”

She also advised against cowering or whining too much as that aggravates the situation as well.

The middle phase is the “meat and potatoes” period where most of the work is being done and negotiations handled between the hostage-taker and law enforcement officials. While the hostages want a quick resolution, the crisis negotiator’s goal is to slow things down and buy time.

During this phase, hostages should, as much as possible, humanize themselves to the attacker. Engage the attacker if possible, tell him your name and use his name, the security experts advised. If the hostage-taker is willing to talk, encourage him to do so. The more he’s talking, “the less time he has to hurt you or anyone else.”

At the same time, it is vital at this stage that you are “situationally aware.” Study what the attacker looks like, what the weapon or weapons look like. Make a mental note of where the hostages are. Are they all together or in separate areas?

Also, you should be looking around and considering what you can use as a weapon to defend yourself if things “deteriorate.”

As for the final phase, the resolution, there are three possible outcomes: a release and surrender by the hostage-taker; escape by the hostages; and “tactical intervention.”

Each possible resolution comes with inherent risks, and in all cases, hostages are advised to have their hands up and open to show that they don’t have any weapons on them. Law enforcement officials will have just a second to figure out if you are “friend or foe” before acting.

Overall, said LaManna, it is of “critical importance” that you develop a “survival mindset” so that you can get out alive.

Cohen said by keeping yourself sane as much as you can during the incident, “no matter how hard your heart is beating…you can keep yourself alive and safe.”