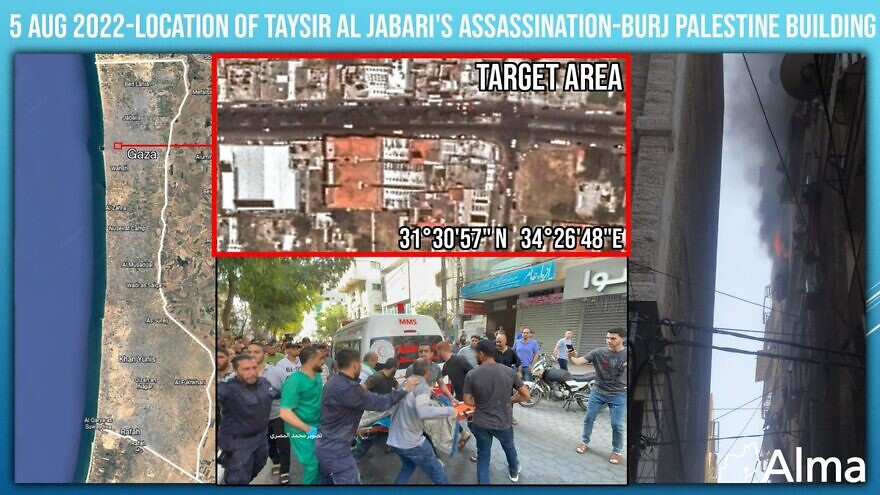 (August 5, 2022 / JNS) The Israel Defense Forces on Friday launched a series of preemptive strikes against Palestinian Islamic Jihad (PIJ) assets in the Gaza Strip, after detecting attack cells from the organization approaching the shared border, the Israeli military stated.

The Israeli home front was bracing for PIJ rocket attacks and the IDF declared a “special situation” in the 80-kilometer zone stretching from the border into central Israel. Iron Dome anti-missile defense batteries have been deployed throughout the country.

The opening strike of IDF’s “Operation Breaking Dawn” targeted two anti-tank squads, as well as the commander of PIJ’s northern region, Tayseer Jabari, who has been behind a string of recent projectile attacks on Israel, according to the IDF.

Jabari was the successor of former PIJ commander Baha Abu Al-Ata, who was assassinated by Israel during “Operation Black Belt” in November 2019, which saw PIJ and Israel engage in a three-day conflict as Hamas remained on the sidelines.

“A short while ago, the IDF targeted a senior commander of the Palestinian Islamic Jihad terrorist organization. IDF fighter jets targeted Tayseer Jabari, the senior PIJ commanding officer of the terrorist group’s Northern Gaza Division. Jabari was entrusted with making many decisions in the PIJ,” the IDF said in a statement.

Reuters quoted Gaza health officials as saying that at least eight people had been killed and 44 wounded in the enclave.

Since Aug. 2, the IDF has kept swaths of the western Negev under tight security, limiting road and rail travel and keeping gatherings small. This, as it monitored PIJ attack squads—including anti-tank, sniper, and shooting cells—moving close to the border.

The IDF had been receiving concrete intelligence that PIJ was interested in conducting revenge attacks for Monday’s arrest of PIJ senior member Basaam Al-Sa’adi in Jenin. The options included rocket fire on the Israeli home front, anti-tank fire or sniper fire. Israeli forces worked to prevent all of those options from being realized in the past week.

“These have been dramatic days, with these squads flexing, moving close to the border, and posing an imminent threat,” said Hecht.

“We were planning to move fuel trucks into the Gaza Strip so that the people of Gaza can have electricity, but once we saw threatening movements, we had to act,” he said.

Egypt is believed to currently be involved in mediation efforts with Hamas in an effort to keep the terror faction that rules the Strip out of the escalation.

Meanwhile, the IDF has called up 25,000 reserve troops.

The military first sealed roads in parts of southern Israel and temporarily banned train traffic south of Ashkelon on Aug. 2, citing concerns of reprisals after Israeli security forces arrested Bassam al-Sa’adi, the head of PIJ in Judea and Samaria, who was suspected of coordinating imminent terror attacks.

The Israeli forces that entered Jenin came under fire, and a gun battle ensued, the military said in a statement. A number of terrorists were hit, according to the IDF. At least one gunman—later claimed by PIJ as one of its members—was killed.

There were no casualties among the Israeli forces, who seized weapons, ammunition and cash.

The nature of Sa’adi’s arrest suggests that he was connected to an urgent terror plot.

For his part, Jabari was responsible for multiple rocket attacks on Israel during the May 2021 “Operation Guardian of the Walls,” an 11-day conflict fought between Hamas and PIJ against Israel.

Jabari, 50, was from the Shuja’iyya neighborhood in eastern Gaza and has been a high-ranking PIJ member since 2007. He served as a deputy of Abu Al-Ata until the latter’s assassination in a targeted strike by Israel in 2019.

According to the IDF, Jabari held a number of positions in the terrorist organization, including head of operations.