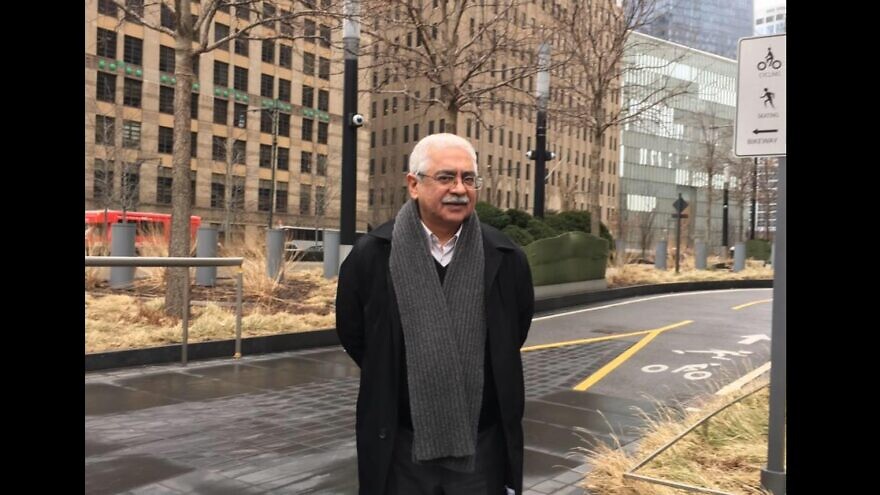 (January 13, 2022 / JNS) Iranian opposition activists of various faiths in the United States and Europe are speaking out against the Biden administration for recently permitting the immigration into America last month of Abdollah Shahbazi, a notorious anti-Semitic historian and former member of the Iranian regime’s Intelligence Ministry.

“It is sad and shameful that the current U.S. administration has allowed someone like Shahbazi who is a very proud Jew-hater into this country,” said Khosrow Beitollahi, a former Iranian air-force pilot and non-Jewish Los Angeles-based activist against Iran’s current regime. “He’s the Iranian regime’s version of a neo-Nazi and doesn’t belong in America.”

Shahbazi, 66, now living in New York with his relatives, was once head of the Iranian regime’s “Political Studies and Research Institute” (PSRI), a quasi-academic organization within the regime’s Intelligence Ministry, said Behnam Golipour, an Iranian journalist based in the Czech Republic.

Shahbazi has published countless Jewish conspiracy and anti-Baha’i’ articles and books in the Persian language for more than three decades, said Golipour, who first exposed Shahbazi’s immigration to the United States on social media.

“Shahbazi should be considered one of the most important people in theorizing anti-Semitism and anti-Baha’ism in Iran,” said Golipour, who has extensively reported on the Iranian regime’s state-sponsored anti-Semitism. “Shahbazi’s works have become a reference and a tool for other individuals and government institutions to persecute Jews and Baha’i’s in Iran.”

Shahbazi did not respond to multiple emails for comment.

Bijan Khalili, editor and publisher of Iranshahr, a Persian-language newspaper based in Los Angeles, said Shahbazi declined to be interviewed by his publication, and that he recently stated in an email that his “views were clearly available for all to read on his website.”

Iranian Jewish organizations in Los Angeles and New York contacted did not return calls for comment on Shahbazi’s recent immigration into the United States. The community’s leadership has long remained silent when it comes to the Iranian regime’s anti-Semitism for fear of what they say may be used as an excuse by the regime to retaliate against the estimated 5,000 to 8,000 Jews still living there.

‘His motivation seems to be extreme Jewish hatred’

Nevertheless, individual Iranian American Jewish activists have been vocal about their opposition to Shahbazi’s entry into America, especially at a time when anti-Semitism is growing in the country.

“If Shahbazi continues his anti-Semitic work here, he will find a large number of followers in today’s America, where anti-Semitism has become a normal criterion among the leftist movements,” said Frank Nikbakht, an Iranian Jewish activist and head of the L.A.-based Committee for Minority Rights in Iran.

Nikbakht said Shahbazi has not recanted his anti-Semitic or anti-Baha’i’ views, which are still available on Shahbazi’s website and that also contained in his notorious five-volume published book titled The Jew and Parsi Plutocrats: British Imperialism and Iran. The book contains countless Jewish conspiracy theories and in 2006 received “Iran’s Book of the Year Award” from the anti-Semitic, anti-Israel former Iranian President Mahmoud Ahmadinejad.

“His [Shahbazi’s] motivation seems to be extreme Jewish hatred and Islamic fanaticism because he ignores the worst invasions, massacres, destruction and colonialism in Iranian history—those of the Islamic invasion and colonialism, also the Mongol invasion and focuses on relatively miniscule effects of Jewish presence, which was mainly positive and constructive,” said Nikbakht.

Other activists said that Shahbazi, during his tenure as head of the PSRI, also actively promoted Holocaust denial. The PSRI’s Persian-language Historical Studies Quarterly publication’s fall 2006 issue was entirely dedicated to Holocaust denial and contains articles such as “Did six million really die?” and “Truth of the burning furnaces.”

Likewise, during Shahbazi’s tenure as head of the PSRI, the organization also published the infamous Holocaust-denial book Holocaust Behind the Curtains, also in the Persian language.

‘Send a message that America will not harbor Holocaust deniers’

Dr. Danial Jafari, president of the “Iranian-Americans for Liberty,” a nonprofit advocacy group opposed to the Iranian regime and based in Washington, D.C., said the Biden administration should deport Shahbazi because of his support for Holocaust denial.

“It’s clear as day that Mr. Shahbazi is a Holocaust denier and directly connected to the regime,” said Jafari. “I call on the Biden administration and the Department of Homeland Security to immediately investigate this situation. President Biden should purchase Mr. Shahbazi a one-way ticket to Tehran to send a strong message to the regime that America will not harbor Holocaust deniers.”

Leaders at the L.A.-based Simon Wiesenthal Center said they were concerned why an anti-Semitic official like Shahbazi was permitted entry into the U.S. to begin with.

“Has this person rejected his long-standing anti-Semitic writings?” said Rabbi Abraham Cooper, associate dean and director of global social action at the Wiesenthal Center. “If not, why did he come to America, and why would the U.S. let him in with such a notorious past? It is a felony to lie in the immigration process to enter the U.S.”

Calls made to the U.S. State Department for comment concerning the decision to allow Shahbazi’s immigration into the country were not returned.

“A major reason why the U.S. government and the public are mainly misled about the situation in Iran is that the Islamic regime in Iran exports its “experts” with the help of inside connections in our government and then these experts become the primary sources of the misinformation here in the U.S.,” said Iranian opposition activist and political theorist Reza Parchizadeh, who is based in Maryland.

Indeed, Shahbazi is not the first Iranian anti-Semitic personality to come to the United States in recent years and face the Iranian American community’s opposition because of their hatred of Jews.

In December 2017, hundreds of Iranian Americans protested outside a musical concert in downtown Los Angeles held by anti-Semitic Iranian Muslim singer, Mohsen Yeganeh. Also in 2015, various Iranian American activists in L.A. also launched a campaign against Akbar Abdi, an Iranian Muslim comedian who had used derogatory terms to describe Jews and who had traveled from Iran to perform Farsi language shows in Southern California and elsewhere in America. These efforts ultimately led to the cancellation of Abdi’s event.

For their part, Iranian activists said they will continue to monitor Shahbazi’s activities and raise public awareness about other individuals affiliated with the Iranian regime that are promoting the regime’s hateful ideology in America.

Said Khalili: “Shahbazi’s case is important to us because we want anybody that promotes anti-Jewish views to understand that he will face the consequences of his actions when he comes to the U.S.”