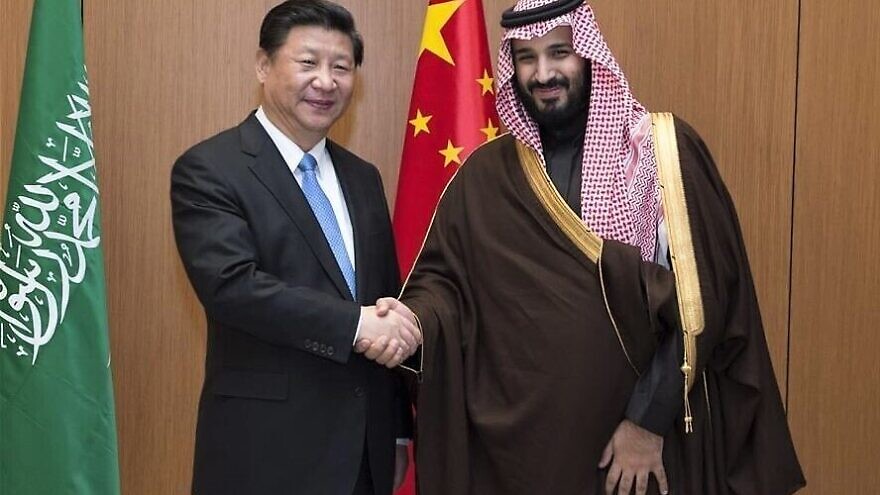 (September 21, 2020 / JNS) The recent normalization deals between Israel, the United Arab Emirates and Bahrain have fundamentally shifted the region’s alliances. Both Gulf countries maintain close ties with Saudi Arabia, and speculation abounds as to whether or not the Saudis will be the next country to formalize ties with the Jewish state.

While Israel may be on the verge of cementing a close alliance with major Sunni Arab states in the face of a common enemy with Iran, at the same time, concern is also growing about a possible nuclear race in the region with China’s help.

A recent report in The Guardian indicates that Chinese geologists say Saudi Arabia may have enough uranium ore reserves for the domestic production of nuclear fuel. At the same time, a Wall Street Journal report said that Western officials have grown concerned about nuclear cooperation between China and Saudi Arabia in the construction of a facility for extracting uranium yellowcake from uranium ore. This facility is being built with the assistance of two Chinese companies. Similarly, The New York Times reported that Western intelligence agencies are “scrutinizing” the Saudi’s work with China to develop nuclear expertise as a cover towards the development of a nuclear weapon.

Dore Gold, president of the Jerusalem Center for Public Affairs, told JNS that the Saudi-Chinese relationship has existed for many years already. In the 1980s, Saudi Arabia reached out to China because it wanted to obtain Chinese missile technology.

“They acquired from China some of the longest-range ballistic missiles in the Middle East,” he said. “So we have been there.”

But Saudi nuclear capability, even if for peaceful purposes, could still place the Saudis at the threshold of nuclear military capability, which has Israel greatly concerned.

Gold said “one of the challenges for diplomacy is to try and make some of the moderation in Saudi behavior more permanent, and I don’t think we’ve done that. As much as Saudi interests have changed, it is a reversible change. We have to make sure that it has a higher degree of permanence.”

While Saudi Crown Prince Mohammed bin Salman (MBS) has demonstrated an interest in moderation by creating distance from the extremist Wahhabi ideology of many of Saudi Arabia’s top clerics, it remains unclear whether or not his influence will hold.

According to Gold, Israel and Saudi Arabia “need to take the mutual threat we both face and create a basis for a quasi-alliance, but I’m not sure we are there yet. Relationships with countries you don’t have diplomatic relations with are usually held very tightly in the hands of whoever is the leader. The question is how you make it permanent.”

That question could be answered soon if reports are true that Saudi Arabia will eventually sign a normalization agreement with Israel.

Making such diplomatic relations permanent “could be an agenda item for the U.S. and Israel to work on after the American elections,” said Gold.

So why did the Saudis turn to China, of all countries, for assistance with its nuclear program, especially since China has helped Pakistan and Iran in the past?

According to Saeed Ghasseminejad, a senior Iran and financial economics adviser at the Foundation for Defense of Democracies, the Saudis probably have two reasons to go to Chinese companies.

“First,” he told JNS, “if they decide to move towards military nuclear capabilities, China and Chinese companies will be more accommodating or at least less hostile towards such a move.”

“Second, the Kingdom is trying to diversify, if not realign, its strategic foreign partnerships,” said Ghasseminejad. “Working with China on this strategic project is another sign that China and Saudi Arabia are strengthening their bond.”

Bin Salman has said that he would not pursue the nuclear option unless Iran achieved the bomb, which it still has not; however, he has started working on nuclear capability nonetheless. Why?

“In 2015, [former President Barack] Obama signed a deal with Tehran that gave Tehran a patient pathway to a nuclear bomb and gave it an industrial large-scale nuclear capacity, which could quickly turn into a military program,” recounted Ghasseminejad. “The Democratic Party still insists that the [the deal] is the golden standard of nuclear non-proliferation agreements, and they want to go back to it. Saudi Arabia, as a longtime U.S. ally that does not chant ‘Death to Israel,’ obviously wants at least what Iran got.”

“Also,” he added, “for decades, Riyadh and Washington had a deal where Saudis bought U.S. goods and weapons, and helped Washington in managing the oil market, and Washington defended Saudi Arabia.”

However, Ghasseminejad said that recent U.S. actions by both the Obama and U.S. President Donald Trump have made the Saudis more cautious of solely relying on the United States. “Obama actively tried to undermine the Saudis in favor of Tehran, and Trump did nothing when the clerical regime targeted the heart of Saudi’s oil industry,” he said.

He went on to explain that if an administration run by 2020 Democratic presidential candidate Joe Biden “will offer Tehran the same patient pathway to a nuclear bomb, and neither Republicans nor Democrats guarantee Riyadh’s security, then the kingdom probably perceives that having nuclear capability is an option, if not the best option, to deter the Islamist regime in Tehran from further and more severe aggression in future.”

Saudi Arabia is having a ‘Shah-moment’

Israel is naturally concerned after it warned the Obama administration that the nuclear deal with Iran would start a Middle East arms race, that now its worries are coming to fruition. Now, Saudi Arabia believes that it needs nuclearization to counter Iran. Who is to say tomorrow it won’t be pointed at Israel?

Ghasseminejad noted that while the Saudis may currently be a friend of Israel, “MBS is having his Shah-moment.”

As Ghasseminejad described, in the 1960s, the Shah decided that “modernizing the country required weakening the monarchy’s traditional allies and broadening the middle class as the support base for a modern monarch. It was an absolutely successful plan that modernized the country at a fast rate but led to a political disaster. Two decades later, the clergy turned on him and the middle class left him alone and joined the revolution.”

“MBS is following the same plan,” observed Ghasseminejad. “He may succeed in avoiding the Shah’s fate, but it is also possible that he won’t. As a result, it is essential to make sure the conservative kingdoms of the region will not be replaced with a radical Islamist regime, and if they do, their successor will not get their hands on nuclear weapons.”

What happens when the Middle East goes nuclear? Will there be a way down from the ladder at that point?

“A nuclear Middle East will be a ticking nuclear bomb,” said Ghasseminejad. “Some may hope that the imminent threat of a nuclear Armageddon will curb the apocalyptic urges of religious fundamentalists in the region. That is a gamble no sane person should accept.”