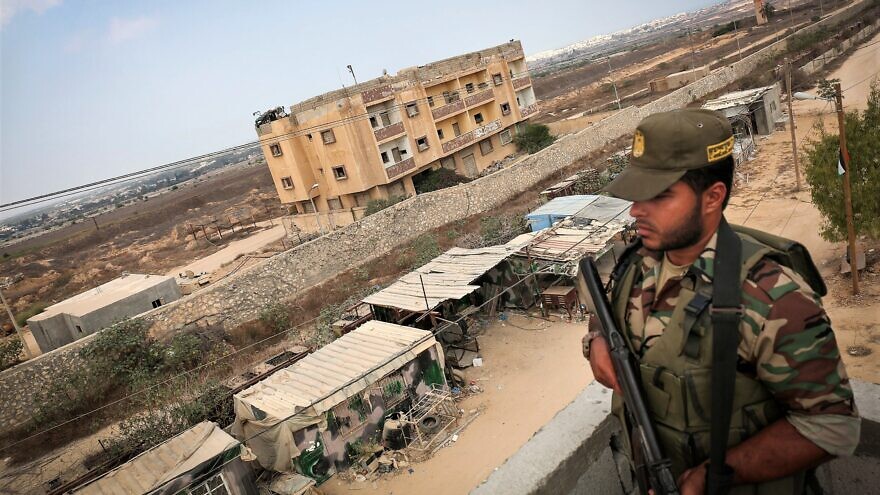 A Hamas security guard in the Gaza Strip near the border with Egypt a day after a suicide-bomber killed a Hamas guard in southern Gaza, in what seemed to be an ISIS attack against Hamas forces, Aug. 17, 2017. Photo by Abed Rahim Khatib/Flash90.
Spread the word.
Help JNS grow!
Share now:

(April 28, 2022 / JNS) Attacks by ISIS (the Islamic State) have spiked in its areas of activities around the world, including in the Sinai Peninsula, where the Egyptian armed forces have spent years battling the terror organization, a new report by an Israeli security research center said on Wednesday.

The Meir Amit Intelligence and Terrorism Information Center said that in the past two weeks, a discernable rise in attacks in various ISIS districts has occurred, attributing the rise to the organization’s declaration of a campaign of revenge for the deaths of Abu Ibrahim al-Hashimi al-Qurayshi and the group’s former spokesman, who were killed in February in an American counter-terrorism raid in Idlib, Syria.

According to the report, multiple attacks occurred in the northern Sinai in recent days, including a shooting attack on April 25 targeting an Egyptian army patrol south of the town of Sheikh Zuweid; two soldiers were killed and a third one injured. An exchange of fire on the same day took place between ISIS terrorists and fighters from a Sinai Bedouin tribal union that supports the Egyptian army.

The pro-Egyptian militia received air support during that exchange from manned and unmanned aircraft, according to the report. Six Bedouin fighters were killed, it added.

Roadside bombs and ambushes occurred in other areas of northern Sinai as well in April.

The Egyptian military’s campaign against ISIS is backed by armed Bedouins who support the Egyptian effort.

The report said that on April 22, two Bedouin fighters kidnapped by ISIS were executed. Two days later, an ISIS-affiliated media outlet released video footage showing the murder of men it claimed were “spies,” who were likely the kidnapped victims.

The spokesman said ISIS terrorists in Israel “fought and were killed for the sake of Allah and religion,” and criticized the terrorists belonging to Fatah and Palestinian Islamic Jihad, who he said battle for “land and homeland.”