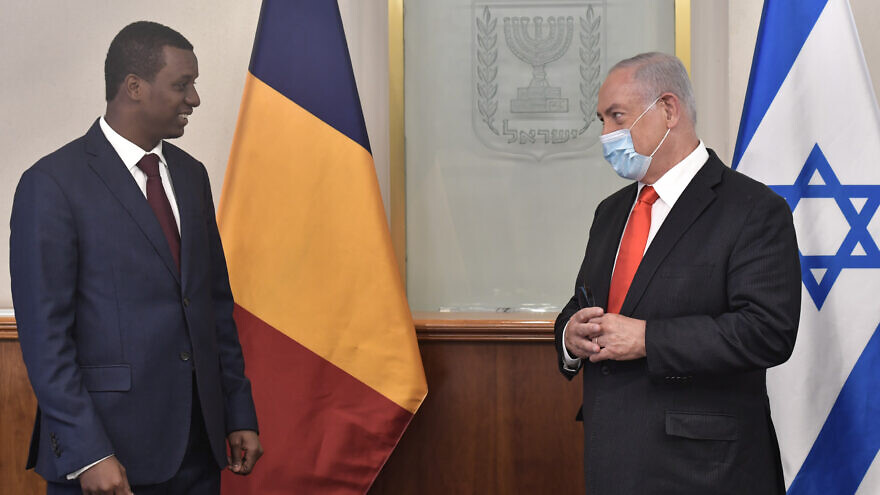 (September 8, 2020 / JNS) Israel and Chad discussed on Tuesday the possibility of upgrading diplomatic relations, including exchanging ambassadors and for the latter to have an embassy in Jerusalem, according to Israeli Prime Minister Benjamin Netanyahu’s office.

In addition to potentially exchanging envoys and Chad opening an embassy in Jerusalem, “they also discussed strengthening bilateral cooperation in a range of areas, including the war on terrorism, cyber, water and agriculture,” according to Netanyahu’s office.

Netanyahu visited Chad last year. In November 2018, Idriss Déby became his country’s first leader to make an official visit to Israel. During this visit, he announced that he would renew bilateral ties with Israel, which were severed in 1972.

A landlocked nation located in central Africa, the former French colony is about 55 percent Muslim and 40 percent Christian with a long history of co-existence between its dominant faiths. Split both culturally and geographically between the Sahara to the north and a tropical savannah to the south, the country faces numerous challenges as one of the world’s poorest nations.

The renewal of ties with Chad is part of a larger effort by Netanyahu to forge closer relations with non-traditional allies in Africa, Asia and Latin America.

He views this not only as an opportunity for Israel to assist these countries with humanitarian needs and economic development, but also for Israel to gain support in international bodies like the United Nations, which have traditionally been hostile to the Jewish state.

Improved ties between Jerusalem and N’Djamena further highlight Israel’s efforts to normalize ties with other Arab and Muslim nations in Africa, following Israel agreeing last month to normalizing relations with the United Arab Emirates, an agreement that is scheduled to be officially signed on Sept. 15 at the White House.