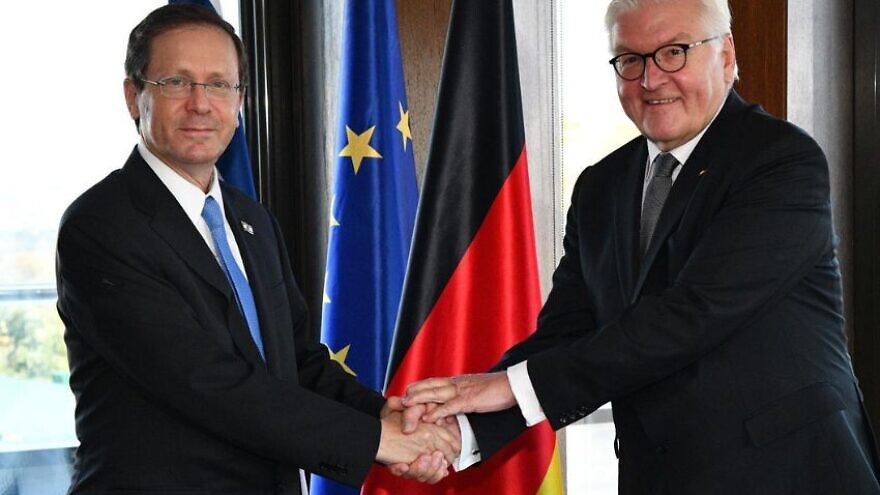 (September 1, 2022 / JNS) Israeli President Isaac Herzog and his German counterpart Frank-Walter Steinmeier on Wednesday welcomed the compensation agreement between Berlin and the families of the 11 Israeli athletes killed by Arab terrorists at the 1972 Summer Olympics.

“Soon before the 50th anniversary of the massacre of Israeli athletes at the Munich Olympics, an agreement has been reached for a historical inquiry, the taking of responsibility, and suitable compensation for the victims’ families,” they said in a joint statement.

“This agreement cannot heal the wounds, but it includes an acceptance of responsibility on Germany’s part and its recognition of the terrible suffering of the victims, whom we shall commemorate next week, and of their loved ones,” they added.

The victims’ families will share a total of $28 million.

The two leaders added that they would attend the ceremony in Munich on Monday, Sept. 5, commemorating the victims of the massacre.

The families of the murdered athletes threatened to boycott the memorial ceremony during the summer over what they described as an “insulting” compensation offer by the German government.

The German Interior Ministry admitted in late July that it was in talks with the relatives and that the “serious consequences for the surviving dependents of the victims in immaterial and material terms” should be reassessed.

Early on Sept. 5, 1972, members of the Black September Palestinian terrorist group killed two members of the Israeli Olympic team and kidnapped nine others in the athletes’ village.

After a standoff and subsequent botched rescue effort, 11 Israelis, five Palestinian kidnappers and a German policeman were dead.

The Games were allowed to resume after a 34-hour pause.

The families of the 11 Israeli athletes and coaches blame the German authorities for their handling of the attack and its aftermath.

Herzog commended the many years of intensive activity by the bereaved families, the Olympic Committee of Israel and the staff at the Israeli and German embassies, which he said had led to the compensation agreement.

“I believe that 50 years after this catastrophe, the time has come to find relief for the bereaved families and to reaffirm the lessons of this tragedy, including the importance of fighting terror, for future generations,” said Herzog.

Steinmeier said, “My thoughts are with the bereaved families. I am grateful and relieved that a solution was found that opens the door to a joint commemoration. I also thank my friend and colleague Isaac Herzog for his trust and engagement, and for keeping the conversation open.”