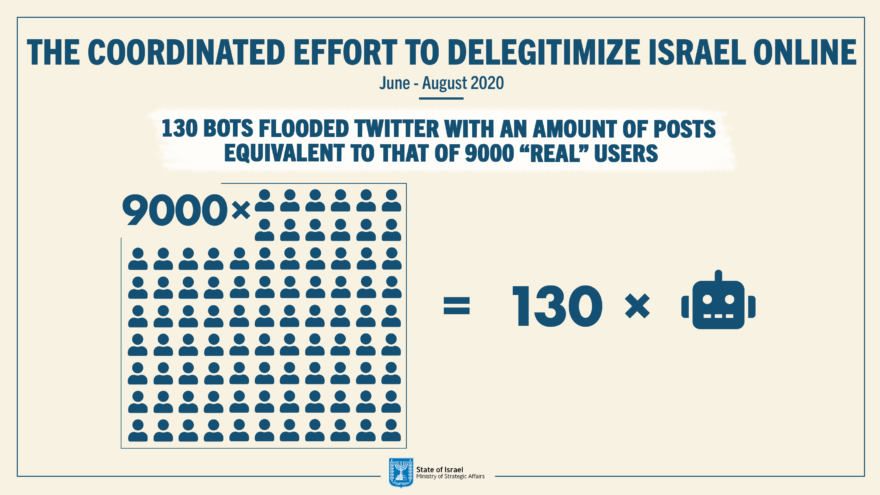 The report shares the results of a ministry study examining 250 suspicious Twitter accounts, finding 170—or nearly 70 percent of them—to be inauthentic profiles trying to stir anti-Israel sentiment online and manipulate discourse against Israel in violation of Twitter policy.

The report notes that while criticism of Israel is a legitimate form of freedom of expression, “the use of inauthentic technological tools to generate a semblance of widespread support for such criticism, is prohibited by social media platforms.”

The ministry said that the phony accounts were discovered “through a combination of technological tools used for identifying and analyzing inauthentic activity online along with manual examinations by experts.”

A ministry spokesman told JNS that “inauthentic accounts” is an umbrella term used by the ministry for both “bot” and “troll” accounts.

He explained that “in general, bot accounts will partake in abnormal and non-human behavior, such as posting dozens and even hundreds of times per minute, post at exact times and or 24/7 every day for weeks, months and even years on end, and may work in sync with other bots posting similar content. A troll has a real user behind them, yet they post content—usually fake news or misinformation.”

According to the study:

“At the height of their activities surrounding the ICC decision on Israel, over 15,000 tweets were posted under the hashtag “#ICC4Israel,” with just 39 accounts creating at least 21% of the posts and reaching 180 times the engagement rates of normal accounts.”

During that same period, talks of expanding Israeli sovereignty over Judea and Samaria were in the headlines. It was no surprise then that one of the most often used hashtags by the phony profiles included: #StopAnnexation.

The ministry said that “the findings indicate an organized and coordinated effort to influence public opinion against Israel. As part of their campaign, anti-Israel activists are artificially inflating anti-Israel discourse on social media to instill the appearance of widespread popular support for their cause.”

The report also identified “two large networks (over 30 users each) of fictitious profiles, which maintained strikingly similar behavior patterns and consisted of profile pictures of young females, while claiming to be volunteers in one of two Gazan NGOs.”

Research indicated that the two large networks are jointly known as the “Volunteer Network,” a group with links to two nonprofit organizations: Palestinian Voices and the Safaa Development Association. The report says that the connection to Palestinian Voices involves ties to entities (from Gaza and Britain) that openly promote Israel delegitimization and even anti-Semitism.

In addition, “The founder of Palestinian Voices, Abdalrahim Alfarra, was involved in organizing the organization’s “Israeli Apartheid Week” events in the Gaza Strip,” according to the report.

One example of a fake account highlighted in the report is dubbed “The Crying Bot.” This account features a “user” posing as a crying elderly Palestinian woman as its profile picture. 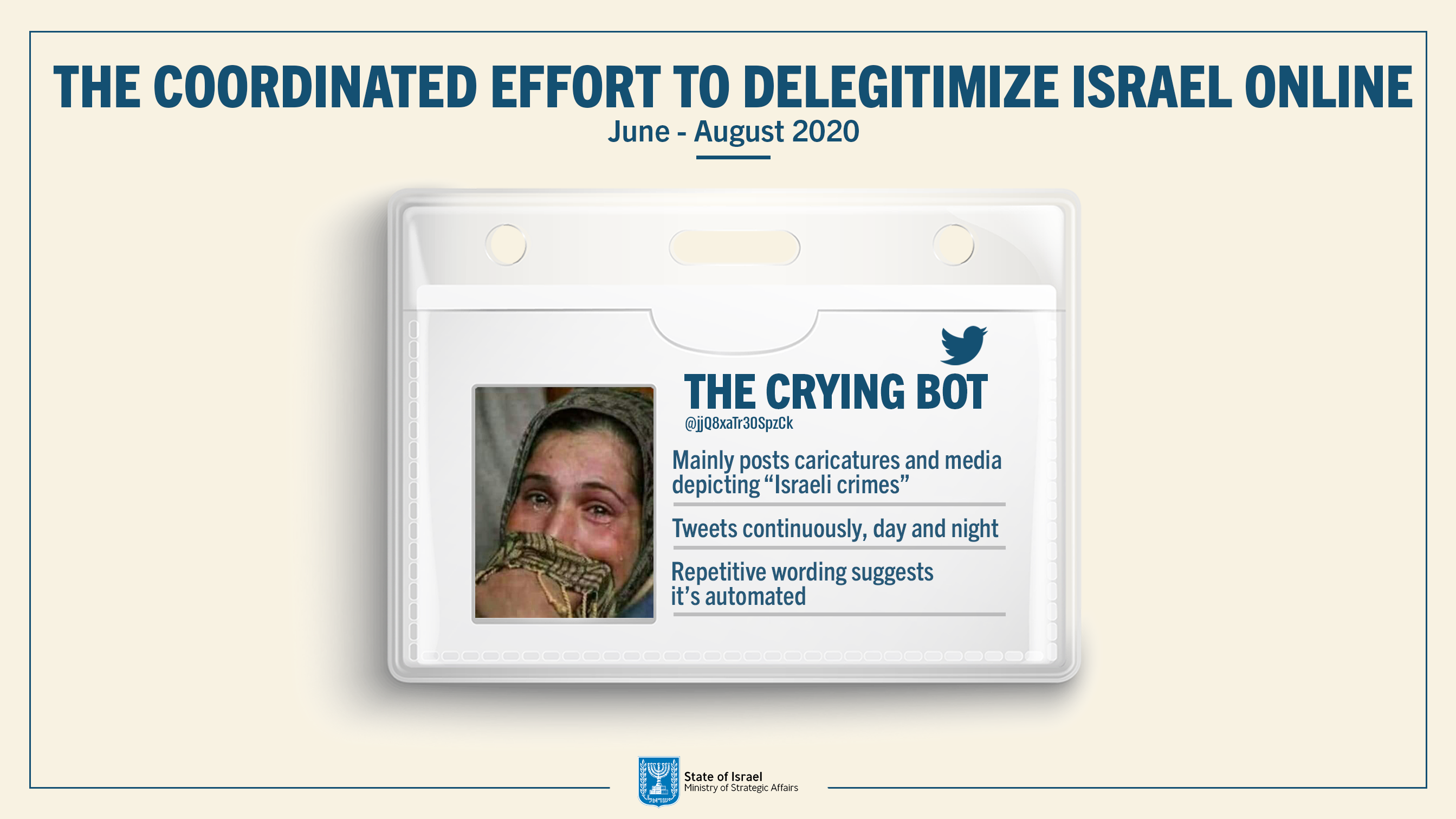 One example of a fake account highlighted in the report is dubbed “The Crying Bot.” This account features a “user” posing as a crying elderly Palestinian woman as its profile picture. Credit: Israel’s Ministry of Strategic Affairs.

Claiming to someone seeking donations to support her family, research showed that “most of the account’s activity comes down to the presentation of media and caricatures illustrating “Israeli crimes” against Palestinians, along with consistently reposting links requesting financial donations.”

In addition, it was discovered that on July 1, the planned date for expanding Israeli sovereignty, the profile blasted out both the hashtags #StopAnnexation and #ICC4Israel.

In response to the study’s findings, Minister of Strategic Affairs Orit Farkash-Hacohen penned a letter to Twitter calling for the removal of the problematic accounts and to conduct an in-depth examination of the manipulative use of their platform.

In a statement, she said that anti-Israel incitement is as a major strategic challenge to be dealt with.

The Ministry of Strategic Affairs says that it “intends to conduct periodic research on the issue to detect inauthentic activity on other social networks and examine legal steps which may be taken on the matter.”