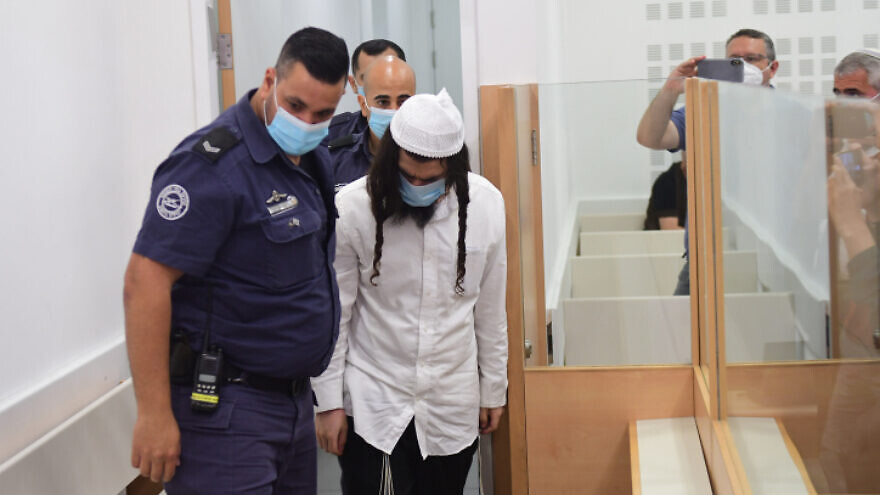 Amiram Ben-Uliel, the main suspect in the July 2015 Duma arson murders in which three members of the Dawabshe family were killed, arrives at the Lod District Court in central Israel to hear his verdict, on May 18, 2020. Photo by Avshalom Sassoni/POOL.
Spread the word.
Help JNS grow!
Share now:

(May 18, 2020 / Israel Hayom) The Lod District Court in central Israel on Monday convicted the main defendant in the 2015 Duma arson case, Amiram Ben-Uliel, on three counts of murder, two counts of attempted murder and one count of arson. Ben-Uliel was acquitted of membership in a terrorist organization.

The 2015 attack, in which assailants firebombed the Dawabshe family’s home in the West Bank village of Duma while they were sleeping, killing 18-month-old Ali Dawabshe, his mother Riham and his father Saad, shocked the nation, drawing condemnation from across the political spectrum.

The only survivor of the attack was 4-year-old Ahmed Dawabshe, who was seriously wounded and hospitalized for nearly a year after the attack.

At the time, Israeli Prime Minister Benjamin Netanyahu vowed that the perpetrators would be prosecuted to the full extent of the law.

During the trial, the defense had argued that the suspects’ confessions had been obtained under duress and were therefore inadmissible. While the Central District Court had originally granted the defense’s motion, the Lod court ruled on Monday that the specific details included in the confessions indicated they were not false and could, therefore, be entered into evidence.

Ben-Uliel’s attorney Yitzhak Bam said in response to the ruling that “after the court accepted the confession and re-enactment made following my client’s torture, the conviction was simply a matter of judicial acrobatics.”

He said he would appeal the conviction before the Supreme Court.

Ben-Uliel’s sentencing hearing has been set for June 9.