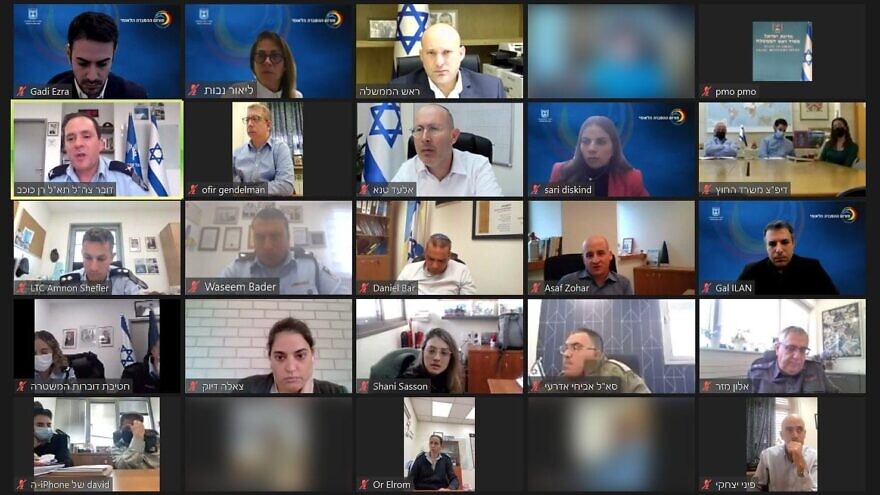 The Forum, which has not convened for years, includes the Israel Defense Forces Spokesperson’s Unit, the Israel Police Spokesperson’s Unit, the Foreign Ministry, Defense Ministry and the Coordinator of Government Activities in the Territories (COGAT), among other agencies. Its goal is to “lead a unified, precise and clear message on significant issues and events of a national scope for the various target communities that the State of Israel seeks to reach,” according to the statement.

Prime Minister Naftali Bennett opened the virtual meeting by stating that Israel’s image and the way it is perceived in the world “are a main component of our national security and our national strength.” This was true even in normal times, said Bennett, but much more so in times of crisis.

“We saw this during ‘Operation Guardian of the Walls.’ On a historic level, in almost every campaign conducted by the State of Israel, there were international pressures that greatly restricted the freedom of action of Israel’s policymakers, and this is also connected to the public diplomacy arena,” he added.

“The expression ‘A picture is worth 1,000 words’ has been proven in studies. The impression that a 10-second video clip makes on you can be for life, immeasurably greater than words,” he said.

With regard to credibility, “We simply cannot issue things that are not true,” said Bennett.

“If we do not know something, we will check and issue the full information that we have at that stage,” he added.

Furthermore, messaging must be precise and clear, he said, adding, “the simpler the better.

Public Diplomacy Directorate head Elad Tene said that the meeting was the “opening shot” in a “significant reorganization” of the effort.

“For the first time in many years, all agencies are convening together to discuss our concept of public diplomacy, to coordinate and to plan,” he said.

Bennett concluded his statement by saying, “I wish us all great success. The challenges are great, but so are the talents here at this forum and its potential efforts.”