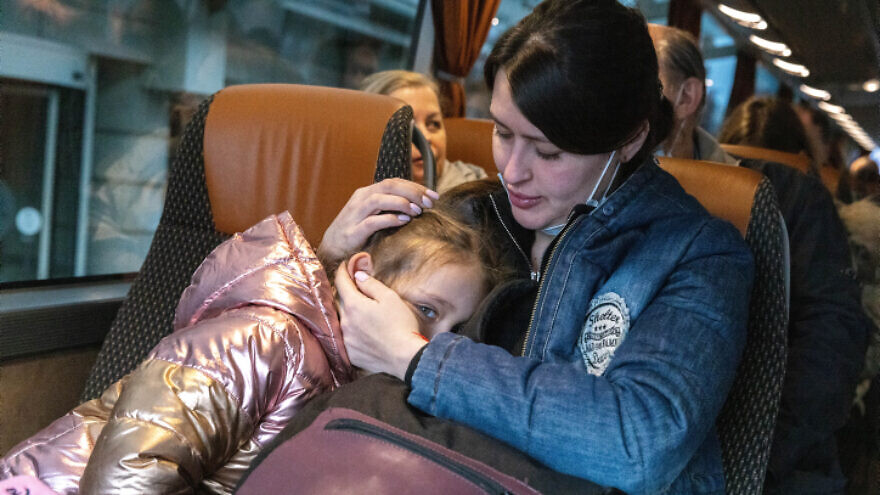 (August 4, 2022 / JNS) The Jewish Agency, which helps Jews immigrate to Israel, stands on shaky ground in Russia, as a Moscow court is set to hold a trial on its dissolution August 19. Even though it’s operating under a cloud of uncertainty, and immigration to Israel has skyrocketed, the Agency continues to operate business as usual, JNS has learned from a government source familiar with the matter.

Since the outbreak of the war on Ukraine in February, 19,100 Russians have immigrated to Israel, a leap from the 7,733 immigrants that came in 2021, according to Jewish Agency numbers. It’s not a stretch to see immigration numbers triple over those of last year by year’s end, assuming the Agency isn’t shut down.

There is no consensus as to Russia’s motives for shuttering the Agency. Some analysts have pointed to the Ukraine war, arguing that Russia is either punishing Israel for speaking out against Russia’s invasion or attempting to warn Israel about taking more concrete action in Ukraine’s favor.

Israel’s government pinned its hopes on a legal team sent to Moscow last week. The delegation held its one and only meeting so far with Russia’s Justice Ministry on Monday. Israel hoped for some insights into Russia’s concerns, but Russia made no demands—the best-case scenario as it would have signaled Russia was ready to negotiate.

“They’re not open to negotiations,” the government source, who preferred to remain anonymous, told JNS.

“The truth is Israel’s government doesn’t know what will happen. The trial opens on the nineteenth. Russia could push for the Agency’s shutdown immediately, or wait a while and then shut [it] down. Or maybe they’ll be open to the Agency’s arguments and satisfy themselves with imposing a fine. For that to happen there will need to be a political intervention,” the source said. He personally doesn’t believe the Russian Justice Ministry will take any initiative unless told to do so by the political echelon, he added.

The meeting on Monday focused on the legal issues of the case, with Russia claiming that the Jewish Agency broke privacy laws by collecting individual private data on Russian citizens. Israel’s lawyers argued that the Agency had been operating within the bounds of Russian law ever since it officially began operating in the country in 1991.

“The general view is more and more inclined to see this as part of the general crackdown by Russian authorities on civil society,” the Israeli government source told JNS. “Many organizations, hundreds of NGOs and associations have been shut down by Russian authorities since the outbreak of the war if they were considered to have some connection or relation to Western countries, or if they were considered not patriotic enough and not supportive enough of the war effort. The Jewish Agency just happens to be at risk.”

One of the reasons this view is gaining adherents is that there hasn’t been anything inherently anti-Semitic about the process, he said. He noted there was one letter of complaint about the Jewish Agency causing a brain drain by targeting highly educated Russians, “but Israel has been hearing this complaint for decades.” He stressed that Israel doesn’t target any subset of Russians, but welcomes all who meet the criteria.

Sophia Tupolev-Luz, founder of ‘The Reboot Startup Nation,” a volunteer initiative that organized at the start of the Ukraine war to help displaced persons find work in Israel’s high-tech sector, said that Russia might not like the fact that highly qualified people are fleeing, but it’s not the fault of the Jewish Agency.

“At the beginning of the war, something like 100,000 IT [information technology] people left Russia as fast as they could, and not just for Israel,” she told JNS.

“In what free country does the government get involved and decide who leaves and who doesn’t? People should get to choose their professions and where to build their lives,” Tupolev-Luz argued.

The closure of the Jewish Agency in Russia would be a huge blow, she said.

“Most Diaspora Jews have been touched by the Jewish Agency’s work in one way or another. The magnitude of their work is so significant for the Diaspora. It’s the key organization,” she added.

Russians will still be able to make Aliyah even if the Agency is shuttered, she said, as applications are processed through the Israeli consulate. If people don’t want to wait months for their appointment, one option is they could arrive on their own steam to Israel, but it would mean coming as tourists and declaring their Aliyah intentions upon arrival.

“A lot of them are too scared to do that, to come as tourists and do what’s called ‘emergency immigration.’ It’s a risky bet,” she said, describing a scenario where potential immigrants discover they don’t have all the necessary documents, yet can’t return to a Russia that has become increasingly closed off, and so find themselves in a kind of limbo.

“From my work with [immigrants], people inside Russia are scared. A Russia that is becoming less and less free is frightening for the Jews of Russia and extremely worrying for the entire world,” she said.

Speaking at the Jerusalem Press Club on Aug. 1, former Jewish Agency head Natan Sharansky said, “The less democratic Russia becomes the more they will need scapegoats, the more they’ll stop the openly sympathetic attitude to Israel, the easier it will be in the street to respond to old prejudices. At the moment, Jews are not the most hated group. They [the Russians] have the Ukrainians. They have the people from Kaukaz [the Caucuses]. They have many others to hate. But can [anti-Semitism] come back? For sure, and very quickly.”