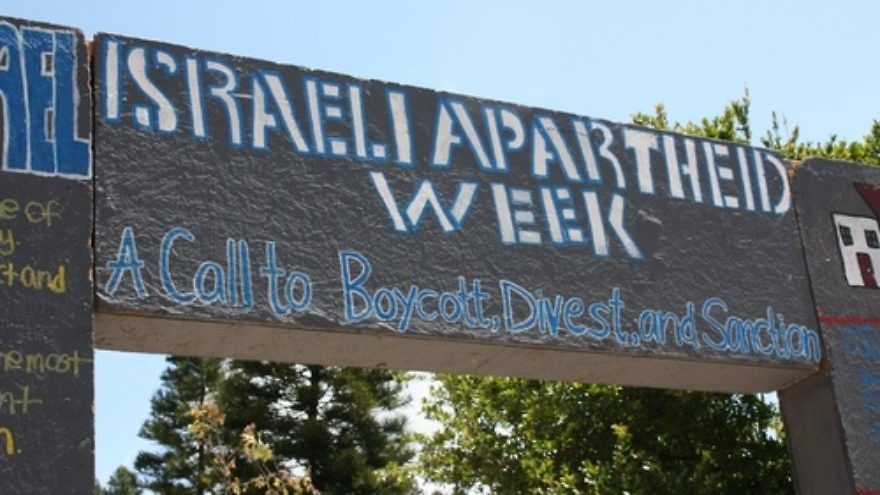 (February 18, 2022 / JNS) The United Kingdom’s National Union of Students is facing backlash for promoting “division, not dialogue” by supporting the annual Israeli Apartheid Week that begins on March 21.

NUS, which has also backed such activities in the past, said it would “stand in solidarity” with pro-Palestinian activists this year planning the weeklong series of events on university campuses, during which they call Israel an “apartheid state,” The Jewish Chronicle reported on Thursday.

Israeli Apartheid Week, which started at a university in Toronto in 2005, is now held in 55 countries. During the week of events, Jewish students are notoriously targeted with harassment, intimidation and threats; anti-Israel campus demonstrations, rallies and lectures are held; and activists have erected mock Israeli checkpoints and walls.

Nina Freedman, president of the Union of Jewish Students, said NUS has “placed themselves in a position of division, not dialogue” with their decision to back the events.

“Israel Apartheid Week is a divisive and confrontational tool used to damage and polarize communities, rather than building consensus and co-operation around the Israeli-Palestinian conflict,” she argued. “We see year on year that it creates a hostile environment on campus and online for Jewish students.”

Jonathan Hunter, chairman of the Pinsker Centre, a U.K.-based think-tank that supports freedom of expression on university campuses, said NUS has the obligation to “represent the rights of all students to the best of their ability,” and “it is disappointing that they instead choose to vouch for radical activists who routinely perpetuate anti-Semitic tropes.”

A spokesperson for NUS defended the union’s decision to back the anti-Israel activities by saying that the annual series of events “is a tactic chosen by Palestinian people to peacefully fight their own oppression.”

The spokesperson added: “NUS is supportive of student activists that choose to stand in solidarity with them in that spirit.”