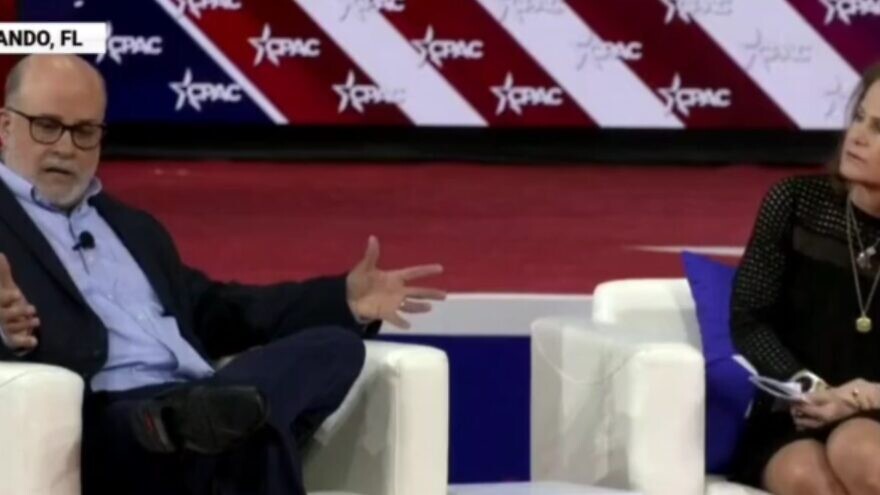 (February 28, 2022 / JNS) Conservative talk show host and lawyer Mark Levin on Saturday attempted to create moral clarity within the conservative movement by rebuking a minority camp that is questioning America’s support of Ukraine as Russia continues its invasion.

Russia’s ground invasion of Ukraine began the night before the opening of the Conservative Political Action Conference 2022 in Orlando, Fla., and raged throughout the duration of the conference. While the war in Ukraine was often mentioned by conference speakers and attendees, it was generally as an aside, used to illustrate what they believed to be foreign policy failures of U.S. President Joe Biden’s administration. There were also conversations on how the fallout could affect the United States, such as rising gas prices and falling stocks. The early days of the conference lacked any serious consideration on how conservative ideals could fit into that context.

Late in the second term of President George W. Bush, CPAC had acquired a vocal libertarian and isolationist contingents. These groups were largely missing from the conference this year and replaced with support for former President Donald Trump.

While most of the conference’s attendees and speakers supported Ukraine in the conflict, some speakers, like Talking Point USA founder and executive director Charlie Kirk, who during his speech said that the entry by undocumented aliens on America’s southern border is an “invasion” and should be prioritized over concerns about Ukraine, and other public figures on the right who feel that Russian President Vladimir Putin’s views better match theirs.

During a panel discussion hosted by Levin’s wife, Julie Strauss-Levin, in front of an enthusiastic audience, as well as during lunch during a Shabbaton hosted by the Young Jewish Conservatives, Levin attempted to bring clarity to how those with conservative ideals should feel about the conflict.

“And I want you, great American patriots, to know something: I am proud of constitutional conservatism. I am proud of the great Ronald Reagan, I am proud of the great Donald Trump, and the reason I have supported these men, and the reason I am who I am and do what I do, is because we don’t pretend that when freedom-loving people are being crushed and slaughtered by an enemy of the United States, that it doesn’t matter. It matters. Taiwan matters, Israel matters, Cuba matters, Venezuela matters, Ukraine matters,” said Levin on the main stage of CPAC. “That doesn’t mean you send American troops willy-nilly into these areas, but it also doesn’t mean you sit on your hands and pretend nothing is going on. These people want to live, and they want to fight! They should have arms! [So, they can] kill as many of these bastards as they possibly can.”

He added that nobody was advocating for sending troops from the United States to fight Russia but said that ignoring and not aiding the Ukrainians would cause a larger, more dangerous war.

“You want a world war? Then become an ostrich, put your head in the sand and let the Russians roll through one country after another, violate our own treaty agreements, pretend nothing is going on,” he said, which will likely lead to other authoritarian nations to pursue their own invasions, such as China invading Taiwan and Tehran deciding to launch missiles on Tel Aviv.

“That’s how you get a world war. Weakness in the face of these genocidal maniacs,” said Levin.

Levin and Strauss-Levin remarked on the heroic actions of the Jewish Ukrainian President Volodymyr Zelensky, who had declined an offer for evacuation of him and his family by the U.S. and instead asked for more weapons and ammunition.

Levin said the Zelenskyy will be remembered for 1,000 years and acknowledged that he has been smeared by some in conservative media.

While Russia is a nuclear power and has since put its nuclear forces on alert, Ukraine had given up its own nuclear weapons in 1994 in exchange for security guarantees from the U.S., Great Britain and Russia.

“He built up the United States military. He secured our border. He pressured NATO to spend more money on their defenses. NATO was stronger when he left than when he came into office,” Levin said. “He didn’t shut down our foreign bases all over the world. He wanted our enemies to second guess him. He wanted our enemies to fear him. When they stepped out of line, whether it’s [the assassinated Islamic Revolutionary Guard Corps-Quds Force leader Qassem] Soleimani or anybody else, the Syrians, he hit them.”

But, added Levin, Trump was “one of the least war-hungry presidents.”

“He was not an appeaser, he was not a pacifist; he was a realist,” said Levin.